Deciding what to cook for dinner is a tough enough decision for most people, let alone thinking about what stock to buy and hold for the next 50 years. Yet adding the right companies to your portfolio today can ensure you'll have enough to eat decades down the road. To make the decision as easy as popping a TV dinner into the microwave, read on to see why Cintas (NASDAQ:CTAS), Netflix (NASDAQ:NFLX), and Disney (NYSE:DIS) are three set-it-and-forget-it companies you should buy today. 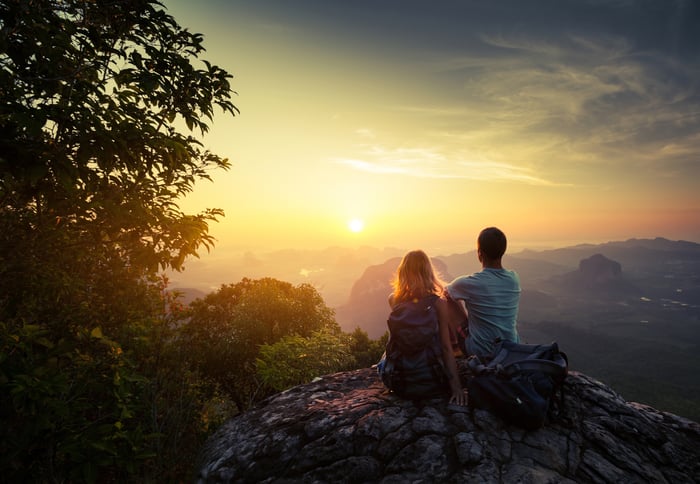 John Bromels (Cintas): You might think there's no way a Fortune 500 company could ever be termed a "growth stock," but uniform renter and business-services company Cintas, which squeaks in at No. 500 on the Fortune 500, has been growing by leaps and bounds over the past five years, with a share price that's increased more than 230%.

The growth continued into the company's first quarter of fiscal 2019, in which revenue rose 5.4% and net income grew an eye-popping 31.9% year over year, with adjusted EPS up 30.3% to a better-than-expected $1.93 per share. While these big earnings increases were largely due to lower tax rates, there's no denying that Cintas continues to grow and gain market share in a fragmented industry. The company's fastest-growing division, first aid and safety services -- which focuses on restocking first aid kits, fire extinguishers, and safety equipment -- saw organic growth of 9% over the year-ago quarter. The strong results caused the company to raise its 2019 guidance.

Surprisingly, though, the market reacted by selling off shares, which have fallen some 15% since the earnings announcement nearly a month ago. This trend could simply represent profit-taking after the stock's incredible run, but the long-term trends of industry consolidation, population growth, and continued economic strength clearly benefit Cintas, the top dog in the domestic uniform rental industry. The nearly 100-year-old company has been able to maneuver into new service offerings as times have changed, and it's positioned to continue to fuel growth through new offerings for decades to come. This dip represents an excellent opportunity to pick up shares.

This happy ending is still many decades away

Anders Bylund (Netflix): Fifty years is an endless investing period, for all intents and purposes, but I really do believe Netflix will stick around for the very long haul. We're living in the early years of the history of a secular entertainment legend.

What started as a simple DVD-by-mail subscription service made a sudden pivot into online video streaming, with a drastic turning point marked "Qwikster" in my old Netflix journals. That digital service started to expand across international borders, first slowly and then with a swift bang. This was another shock for many Netflix investors, who had expected the global expansion to proceed at a more leisurely pace.

Right now, the company is investing billions and billions of dollars into the creation of original content. The old DVD-mailing specialist is becoming an award-winning production studio, complete with in-house creative talents and a complete studio backlot in New Mexico. The cash costs are piling up, and many critics expect these negative cash flows to continue forever. (Spoiler alert: they won't.)

Just as these abrupt swings caught most of us by surprise, it's hard to say where and how Netflix will make its next forceful strategy shift. What's fairly certain is that there will be more of those in the quarters, years, and decades ahead. And that's what it takes to keep your company healthy, relevant, and growing for an extremely long time.

Netflix has proved that it's ready to change with the shifting sands of the entertainment industry at large -- and often lead the charge into the next new era. Sign me up for that ride, please.

Enjoy this entertainment king for years to come

Rich Duprey (Disney): Disney is hitting some all-time highs, but that doesn't mean the king of entertainment and media should be considered for that set-and-forget part of your portfolio. It has ring-fenced many of its properties by interconnecting them into one another so that its movies link to its theme parks, which link to it marketing. Its broadcast TV channels are supported by the whole.

Although not every part may perform equally well at the same time -- some of its television properties are still trying to reclaim their footing, for example, while its movie franchises largely operate like a well-oiled machine -- it's protected from any upheavals because of their diversity. There's also no reason to think it won't continue to do so.

At just 17 times trailing earnings and 16 times this years estimates, Disney stock is cheap, particularly when you consider it also trades at only 15 times the free cash flow it produces. Now, that's not a rock-bottom valuation, but it is relatively inexpensive for a company the size of Disney. Coupled with analyst expectations that the $177 billion House of Mouse will grow its earnings 10% annually for the next five years, it's a cheap stock with excellent growth prospects that you should feel comfortable owning for at least the next five decades.