Blue Apron (NYSE:APRN) took another step toward offering an on-demand product to its customers this week. The meal-kit brand is partnering with Walmart (NYSE:WMT) to sell its 30-minute meals on Jet.com. The kits will be available to New York residents with same- or next-day shipping.

The move represents Blue Apron's second move into the on-demand space in the past month. The company partnered with Grubhub for 30-minute delivery at the beginning of October.

Blue Apron's partnership with Walmart could open the door for expansion into Walmart's broader retail operations. But investors shouldn't get too excited, as Walmart may be able to exercise considerable strength in its relationship. 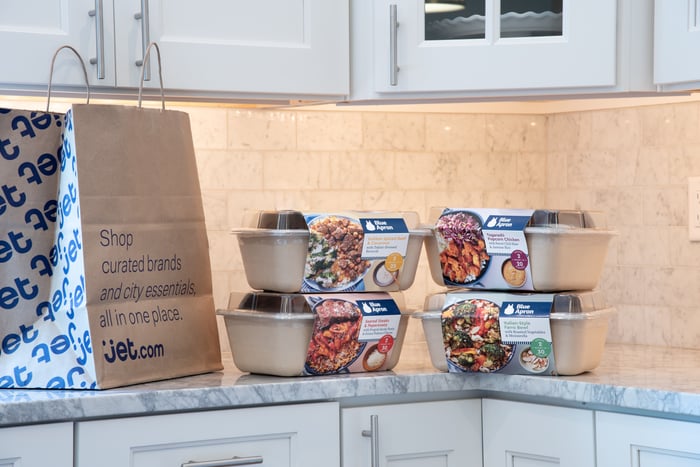 Is Walmart Blue Apron's next Costco?

Blue Apron started partnering with Costco (NASDAQ:COST) stores in May. Currently, about 80 Costco stores across the country offer a rotating selection of Blue Apron meal kits.

Costco prices the four-person meal kits below what subscribers pay online, but Blue Apron management says the economics still make sense -- at least at scale. "We really feel like once we get to scale, that the retail business should be margin-neutral to potentially even gross margin accretive," CEO Brad Dickerson said on the company's second-quarter earnings call.

The company's partnership with Walmart isn't nearly as significant as its deal with Costco. Jet.com will only offer Blue Apron kits to residents in New York and nearby cities.

But the hope is that success in that market will lead to Blue Apron meal kits showing up on the shelves at Walmart. That would be a massive win for Blue Apron considering the volume of groceries Walmart sells. The big-box store is the country's largest grocer, selling about six times as much as Costco, and twice as much as its next-closest competitor. Getting in Walmart stores means getting in front of a massive market of grocery shoppers.

Blue Apron's management hasn't mentioned what level of scale it considers necessary to produce a positive impact on the company's margins, but 80 Costco stores is apparently well short of that level. Adding hundreds, if not thousands, of Walmart stores could get it to an appropriate level of scale, but there's a good chance it won't get there or that it will experience further margin pressure from Walmart to achieve that.

In fact, Walmart may be using Blue Apron to test the viability of its own meal kits. Jet.com has seen a spike in the number of customers searching for "meal kits," according to Jet's chief customer officer, David Echegoyen. Blue Apron gives Walmart a low-risk way of further testing the demand for meal kits on Jet. At the same time, Walmart gains access to customer profiles that actually purchase meal kits.

Costco has made a similar move, testing high-end meal kits in L.A. stores following several months of selling Blue Apron meal kits. Considering Walmart has already shown significant interest in offering its own meal kits, it wouldn't be a surprise if it did the same.

That gives Walmart considerable leverage over Blue Apron. It may never agree to sell Blue Apron products in its physical stores. If it did, it would likely eventually stock its own meal kits right next to Blue Apron's, piggybacking on Blue Apron's brand. It could also demand lower wholesale prices from Blue Apron to get into its stores.

While Walmart presents a great opportunity for Blue Apron, it's also a massive risk that it deteriorates its margins and ends up aiding a competing brand.