The big oil company delivered another quarter of outstanding performance and announced that its recent shale acquisition will be financed on more attractive terms.

BP (BP -1.18%) has put together a rather impressive string of earnings results that have surpassed analyst estimates. This past quarter, the company not only beat expectations, it blew them out of the water by nearly doubling its net income for the third quarter. On top of those impressive earnings, the company also announced that it is changing the way it will finance its recent acquisition in a way that will benefit shareholders.

Let's take a look at what happened this past quarter, what management is doing to improve the terms of its recent shale acquisition, and what investors should make of BP's recent string of successes.

BP has done a truly fantastic job of delivering growth in recent quarters. While much of that can be attributed to higher oil prices, it also has to do with the fact that it's starting up new capital projects both ahead of schedule and under budget. This past quarter's result was the highest per-share earnings since 2014, and that is with an average realized price of $69.6 per barrel of oil and $3.86 per thousand cubic feet of natural gas.

What is equally impressive is that BP was able to maintain strong earnings results from its downstream segments even though earnings from the refining and marketing businesses tend to drop as oil prices rise. Management attributed the results to high utilization rates for its fuel refining and resilient results from its lubricant and petrochemical divisions.

Cash generation was flat for the quarter, but the company noted that it had a $700 million working capital build in the quarter for maintenance and turnaround expenses. 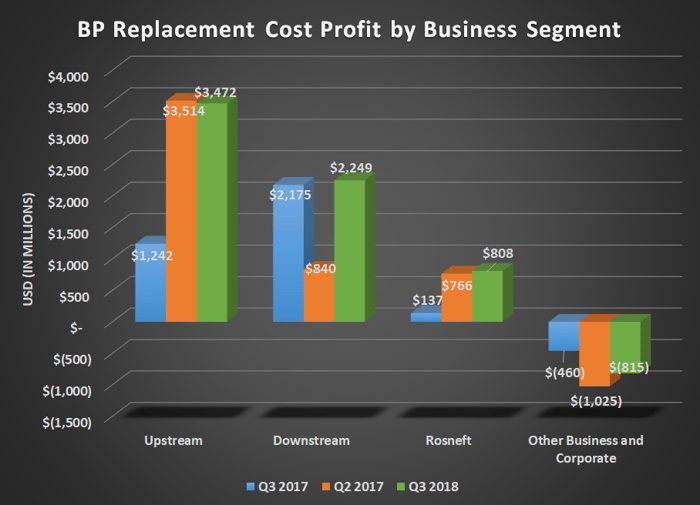 Late last quarter, BP announced it would acquire BHP Billiton's (BHP -2.64%) entire portfolio of onshore oil and gas in the U.S. for $10.5 billion. The deal, designed to boost BP's shale position, was going to be paid for with cash from asset sales as well as the company issuing shares. Thanks to another quarter of strong cash generation, though, CFO Brian Gilvary announced some changes to the way it plans to finance the deal.

This quarter's underlying result was significantly higher than the second quarter in a very similar price environment. Since we announced the BHP transaction, oil prices have firmed to levels significantly above the acquisition assumptions. While oil prices remain at these levels, we expect to finance the transaction fully using cash. In this event, the $5-6 billion divestment programme linked to the transaction will be used to reduce debt. We will also continue our share buyback programme to offset dilution from the scrip dividend.

Investors have to be happy about this outcome. The company will avoid diluting its share count and pay down a decent chunk of debt at the same time. When BP inked the deal for BHP, it was using an assumption of $55 per barrel of oil. With domestic crude prices hovering closer to $70 a barrel lately, this is looking like a great deal. 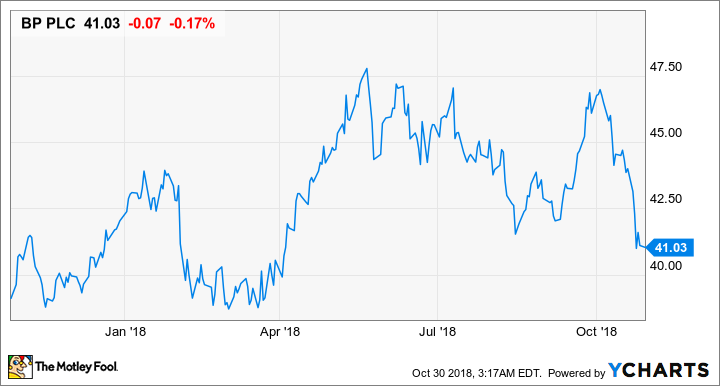 Delivering after years of underperformance

BP hasn't been a good investment over the past decade. Between the Deepwater Horizon spill and the oil price crash, the company has struggled to generate returns for its investors. Were it not for its rather generous dividend, investors would still be looking at a stock that is down compared to a decade ago.

It appears, though, that all of that history is behind it. It has brought several new major projects into service that have desirable rates of return, its downstream business is performing considerably better than it has in years, and management is making some impressive moves that should drastically improve returns. The fact that it is going to pay cash for its $10.5 billion acquisition is a sign of how much better of a position this company is in today.

BP anticipates the BHP deal to close on Oct. 31, which combined with other capital projects will add a significant amount of production to next quarter's result. Pending any unforeseen changes to oil prices or another accident, it looks like BP's shareholders could see much better days ahead.