Now that all five of the integrated oil and gas companies have reported second-quarter earnings, it's looking like BP (NYSE:BP) was the bell of the ball this past quarter with an impressive uptick in earnings and robust production growth. For several quarters in a row, the company has benefited from a deluge of major capital projects that have significantly boosted production, as well as increasing rates of return.

To put a cherry on top of this quarter's earnings, management announced a major acquisition that will help BP plant its flag as a premier shale producer in the U.S. Let's take a look at the company's most recent earnings results as well as what management plans to do with this $10 billion acquisition.

By all means, this was a good quarter for BP, but it isn't a whole lot different than the prior quarter's result with the exception of a major working capital build in the first quarter that ate into operating cash flow. Its net income and cash flow improvements came in higher than the prior quarter largely from higher oil prices benefiting both its upstream segment and its equity stake in Russian oil company Rosneft. Those gains were offset by declines in its downstream refining from turnaround and maintenance activity at some of its facilities. 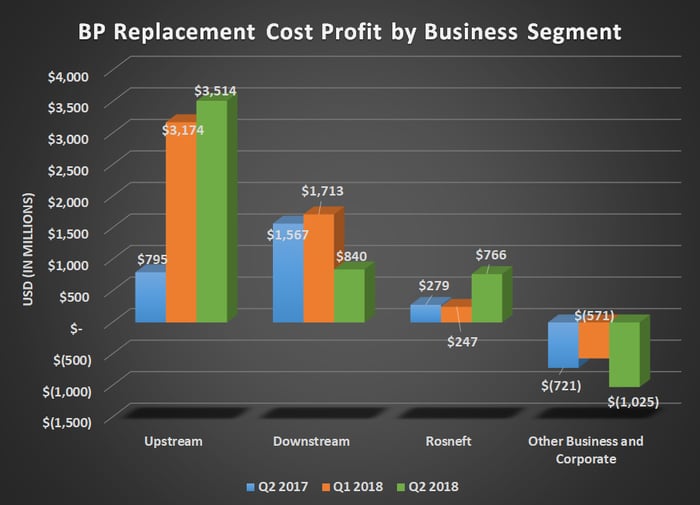 On top of rising oil and gas prices, BP's total production grew 3.3% year over year to 3.66 million barrels of oil equivalent per day, which includes the contribution from Rosneft. Management noted that the company lost a production sharing agreement within the past year, which negatively impacted results. Absent this lost concession, production was up 9.6% from new projects either starting first production or ramping up to full production.

This quarter was significant because the company started up phase 2 of its Shah Deniz gas project in Azerbaijan. At peak production, the project will produce 275,000 barrels of oil equivalent per day in natural gas that will be sent via pipeline to Europe.

Although the company still has a cash drag from its Gulf of Mexico spill payments -- $700 million this past quarter -- it was able to generate enough cash such that management was comfortable increasing its dividend for the first time in four years as well as buying back $200 million in shares.

Of all the moves BP has made in the last year or so, they all pale in comparison to the recent announcement that BP will acquire all of BHP Billiton's (NYSE:BHP) shale assets in the U.S. for $10.5 billion. While BP paid a little more than what analysts thought BHP would get for the assets, management believes that the deal will deliver significant value to the company.

A component of this deal is that BP now expects to sell $5 billion to $6 billion in assets. While the use of the cash will be to buy back share, according to CFO Brian Gilvary, it will also give the company an opportunity to dispose of a few less profitable upstream assets and increase returns without disrupting production rates. Management thinks that the addition of BHP's shale assets will add $1 billion to its 2021 free cash flow outlook. 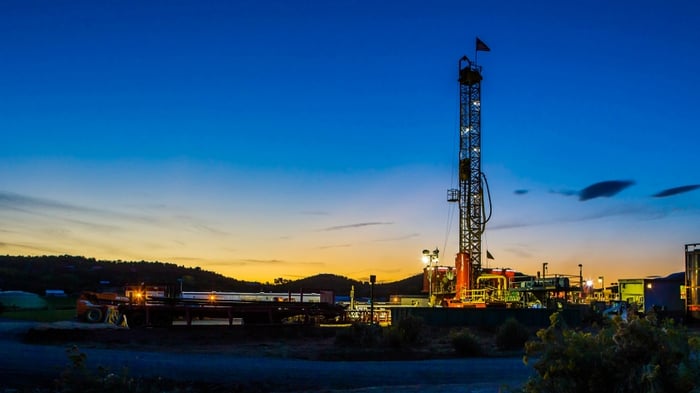 While management gave a lot of deserved attention to the BHP acquisition, CEO Bob Dudley also discussed some of the other major capital projects that are either just coming on line or were just sanctioned.

We have started up three major projects so far in 2018: Atoll in Egypt, the Taas Expansion in Russia, and earlier this month we started commercial deliveries from
Shah Deniz phase 2 on schedule. Shah Deniz 2 is our largest operated subsea development, and along with the South Caucasus Pipeline Expansion, we expect costs to come in 20% below sanction. It is the starting point for the Southern Gas Corridor series of pipelines that will deliver natural gas from the Caspian Sea direct to European markets for the first time.

Looking ahead to growth into the next decade, we made five final investment decisions on projects in Oman, India, Angola, and two in the UK North Sea. This
further de-risks the 900 thousand barrels per day of incremental production from major projects that we expect to add by 2021.

The thing that really matters here aside from the production growth is the rate of return for these projects. By 2021, management's goal is to have its cash breakeven price for production to be between $35 and $40 per barrel. Adding projects like these at those kinds of rates of return have a potential to do wonders for BP's bottom line. 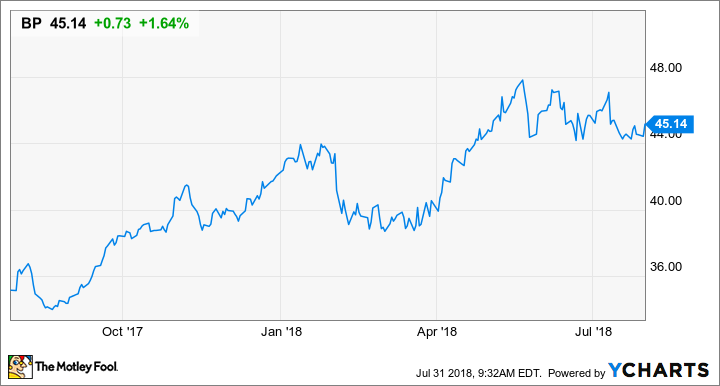 Patience has paid off

BP's plan to grow the business was already a rather impressive one, but management's assertion that it can grow production faster and increase cash flow with this BHP Billiton deal while maintaining its relatively low rates of spending over the next four years is rather remarkable. If it can pull this off, then it will be generating loads of cash to return to investors. What's encouraging is that the company has become much better at project execution as it has completed more than 10 major capital projects on time and either at or under budget in the past two years.

For the past decade, BP has been the underperformer among the integrated oil and gas companies, but the lessons it learned from the Gulf of Mexico spill and oil price crash made it one of the more disciplined companies. Its production growth over the past two years has been fantastic, with plans to grow even more over the next three years, and management is even starting to dip its toes into renewable energy with a commitment to spend $500 annually.

For investors who have long waited for BP's return to prominence as a wealth-generating stock, the next few years are looking promising.