3D Systems (NYSE:DDD) released its third-quarter 2018 results after the market close on Tuesday.

Shares plummeted 21.3% in after-hours trading on Tuesday, which we can attribute to both revenue and adjusted earnings per share (EPS) coming in lower than most investors were probably expecting. The fact that cash from operations was negative also likely weighed on the stock.

Here's how the quarter worked out for the 3D printing company and its investors.

Foreign currency had a 1% negative impact on revenue.

GAAP gross margin came in at 47.3%, compared with 38.3% in the year-ago quarter. However, that period included a $12.9 million charge related to portfolio realignment and product discontinuations. In the third quarter, gross margin declined 150 basis points (1.5 percentage points) sequentially, as it was 48.8% in the second quarter.

The company used $12.1 million of cash in operations and ended the quarter with $92.1 million of unrestricted cash on hand. In total, the company burned through $27.2 million in cash in the period, as it ended the second quarter with $119.3 million in unrestricted cash and cash equivalents. In the press release, management attributed the cash burn to the company increasing "inventory in support of new product shipments and the ramp of printer manufacturing, and [the payment of] a previously accrued, $9.1 million liability related to a litigation settlement in connection with a prior acquisition."

For context -- though long-term investors shouldn't pay too much attention to Wall Street's near-term estimates -- analysts had been looking for adjusted EPS of $0.03 on revenue of $171.9 million, so 3D Systems fell short on both the top and bottom lines. 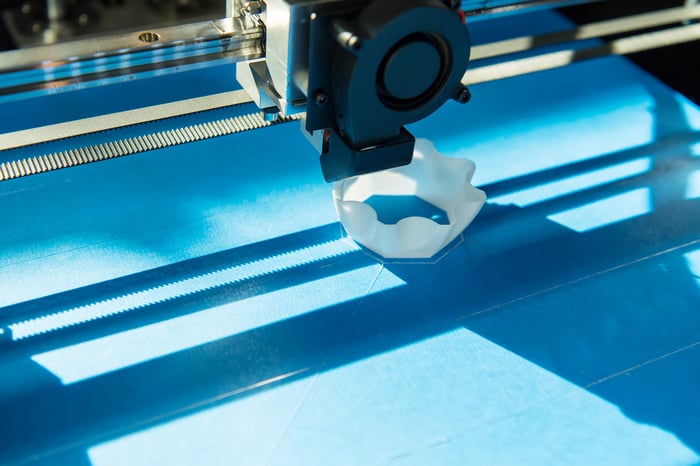 On the earnings call, management reviewed how key categories performed:

We are pleased with our continued strong growth in printer units and printer revenue, in both metals and plastics, as we continue to have balanced execution across all regions. At the same time, we are starting to see cost structure improvements as a result of actions we have taken over the last year.

In short, this was a challenging quarter, though with some bright spots. While revenue increased at a fair pace year over year, growth slowed from the second quarter. And while adjusted EPS came in positive, it was accompanied by cash from operations coming in negative. Moreover, once again, management pushed back the timeline for starting to ship modular Figure 4 systems. (Figure 4 is a fast, scalable stereolithography 3D printing system for producing small plastic parts.) Originally, it was late 2017/early 2018, then it was the second half of 2018, and now it's 2019.