Harley-Davidson (NYSE:HOG) stock has tumbled 7% since third-quarter earnings were reported last week and is down over 36% from earlier this year when trade war fears hit its shares. But the leading motorcycle manufacturer has lost its way in the U.S. motorcycle market, and its plans to fix the problem are so far out in the future that it may be years before we see any turnaround.

Revenues for the period rose nearly 17% to $1.12 billion as it shipped more new model year motorcycles to dealers here and abroad, and Harley reported a net income of $113.9 million, or $0.68 per share, ahead of analysts' expectations of earnings of $0.53 cents per share on revenue of $1.07 billion. 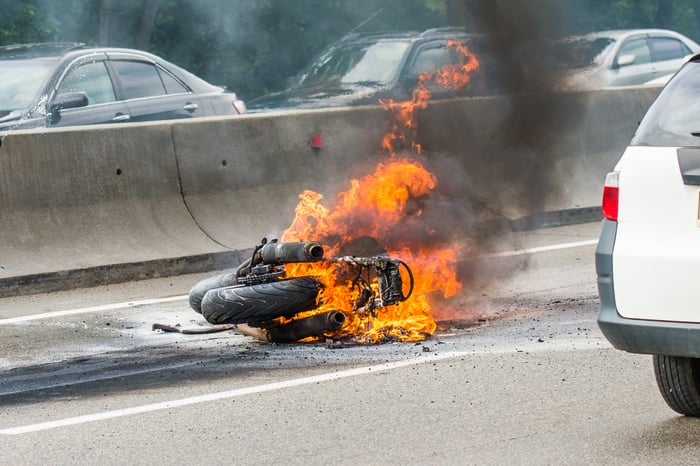 In several international markets Harley-Davidson was able to see sales growth, posting 3% growth in Europe, where it's gaining market share, and enjoying double-digit growth in China, Brazil, and Mexico, though these are individually very small markets.

Here's where it gets ugly

Yet for the seventh straight quarter -- and the 14th out of the last 15 quarters -- domestic sales of motorcycles fell, this time by 13.3% to 36,220 bikes. Not even during the worst parts of the recession a decade ago did Harley sell so few motorcycles in the third quarter. 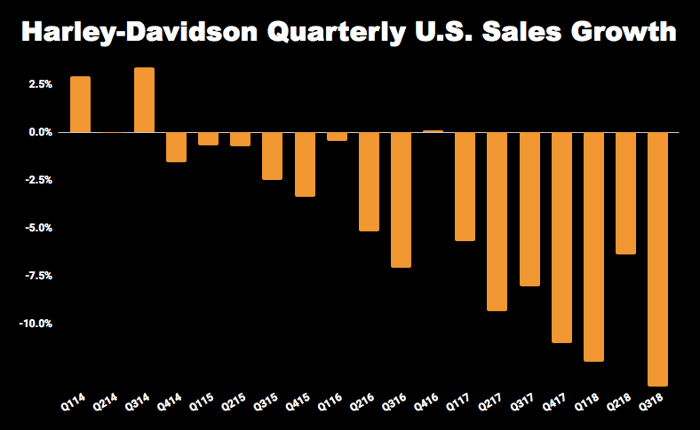 This is a sure sign that Harley-Davidson has no idea how to sell motorcycles in the U.S. anymore. Today's younger, urban, and more female riders are looking for smaller, lighter, and less expensive bikes, but Harley continues to produce big, heavy, expensive models. While it said its lowest-priced motorcycle starts at $6,900 and it has seven Sportsters under $12,000, it also noted prices on its new 2019 models are up 2.5% over last year.

There's no question Harley is caught in an industrywide slump that's seeing the entire market dragged down, but the 9.8% decline in sales for motorcycles with engines 601 cubic centimeters and larger was decidedly better than the bike maker's drop. Harley expects the market and itself to struggle well into 2019, and it is counting on its More Roads to Harley-Davidson road map for the future to help address the downturn.

And this comes as Polaris Industries (NYSE:PII) was still able to report single-digit growth in Indian motorcycle sales. Sure, that's well below the double- and triple-digit sales growth Polaris was seeing early on when it brought back the Indian nameplate, but it is still seeing growth.

Moreover, Harley faces new competitive pressures from Indian (the country, not the brand) motorcycle maker Royal Enfield, which is entering the U.S. market with its small, low-cost, high-performance bikes, the new twin-cylinder Interceptor 650 and Continental GT 650 Twin, both priced at $5,800.

How Harley-Davidson could recover

Harley is counting on its entrance into new markets to reverse the slide. Its LiveWire electric motorcycle is due out next year, and it sees avenues like adventure touring and the new streetfighter bike as helping to introduce new riders to the brand to increase sales.

Although the market for large, powerful electric motorcycles is virtually nonexistent, Harley sees it as one that could offer profitable growth opportunities that could expand 50% annually through 2020.

Similarly, the adventure touring and streetfighter class has a substantial following in Europe, particularly among young and new riders and women. The growth potential there is smaller, some 8% annually, but it can help Harley-Davidson hit its goal of making international markets account for 50% of its worldwide volume.

Why it won't help in the short term

As noted, there's no existing market here or abroad for a motorcycle like the LiveWire. A lot is going to come down to e-bikes' specs, to what sort of power and range these bikes will have. But there's no infrastructure in place yet to support them, so long-distance rides will not be happening, which means they're going to be a supplementary bike for most.

As for the adventure touring and streetfighter bikes, these are markets well serviced by other brands, so there's no guarantee a Harley will resonate with buyers. Also, this is a market for midsize bikes, and Harley's proposed new models stretch that definition.

The biggest problem may be that other than the LiveWire, none of the bikes are scheduled to start hitting the market until 2020 at the earliest.

The turnaround story isn't an easy one to grasp yet. The U.S. is still Harley-Davidson's biggest market by far, and the accelerating sales decline is worrisome because the trend could worsen. So as bad as its earnings report looked, it is going to get worse before there's any chance it can get better, and it has to prove that its plan can actually work.