Harley-Davidson (NYSE:HOG) is scheduled to report third-quarter earnings on Oct. 23, and investors should brace for things to turn ugly. The period is typically among the worst-performing quarters of the year, second only to the winter-weary fourth quarter, and there's no reason to believe the motorcycle maker is about to change results this year.

Below are some areas Harley-Davidson investors should watch to gauge just how bad the situation is getting. 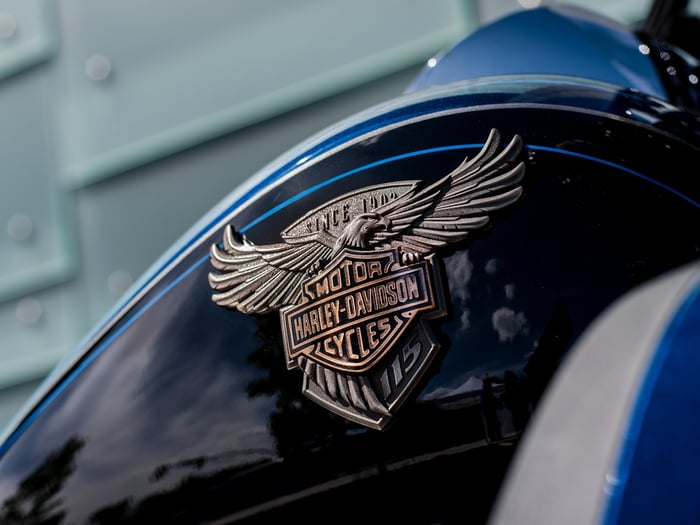 Hope springs eternal at Harley-Davidson, and despite plummeting sales, it says it will boost shipments to dealers by anywhere from 45,500 to 50,500 bikes, a 9% to 21% jump from last year, when it shipped 41,662 motorcycles. There are several reasons why it is increasing shipments.

Inventory in the U.S. was down by 14,100 units in the second quarter as part of a plan to reduce supply on dealer lots. Slow sales had caused dealers to have too many bikes, so Harley has been managing the cadence of deliveries. Now, the new 2019 models are hitting showrooms, boosting the shipment numbers.

Overall, though, Harley expects shipments to be down about 2% to 4% for the year (shipments were down 10.5% in the first half of the year). With as many as 236,000 bikes expected to be shipped for the full year, Harley is building the numbers back up in the second half of the year. But without sales, dealers might soon be in the same boat of having too many bikes on hand.

Last quarter, Harley motorcycle sales surprised everyone by not being as terrible as expected. Not that they were good, but the 6.4% decline was much better than the 12% plunge experienced in the second quarter, making it look as if the turnaround everyone was waiting for had finally arrived.

The problem: The 46,490 bikes sold were the fewest since the second quarter of 2009, when it sold only 35,000 bikes during the depths of the Great Recession. So sales might have been better than everyone thought they would be, but they still weren't good. And since the new crop of bikes are pretty much the same as those they're replacing -- big and expensive, even with the merged Dyna and Softail lines -- it means today's motorcycle buyers aren't going to be lining up to ride off on a Harley.

The new demographic of young, urban, and female riders are looking for smaller, lighter, and cheaper bikes. And though Harley plans to build them sometime in the future, that's not the case now -- and investors shouldn't expect that sales will increase or even appreciably narrow the decline.

They also face competition from used bikes, the sales of which are outpacing new ones by 3 to 1, The Wall Street Journal reports. And there is the lingering threat from the trade war between the U.S. and seemingly everyone else. Although it shipped bikes to Europe ahead of the retaliatory tariffs being imposed, Harley is eating the higher costs instead of passing them along to dealers or customers, which means margins are going to be hurt.

Analysts are forecasting earnings of $0.54 per share this quarter, a 38% increase over the $0.39 per share it earned a year ago. One thing Harley-Davidson has always done well, even during this downturn, is protect its bottom line, though often to its detriment interns of sales.

It has mostly refused to engage in the discounting that its rivals use to move bikes, and that has kept margins intact. Because it owns about half the U.S. motorcycle market and about a third of the global market, it believes it can afford to stay above the fray.

This past quarter it did try several promotional offers, such as discounted financing of 1.99% and a mailing to select customers offering a $1,500 rebate. Both were for a limited time, but the results suggest they had the desired effect. Harley said sales had a slow start due to poor weather in April, but the promotions helped lift sales in May and June, and likely led to the "less worse" sales performance in the quarter.

Harley generated adjusted earnings of $1.52 per share, a less than 3% gain from the prior period, which indicates it could do more on the discounting front. It could generate more sales, preserve its market position, and still grow profits for shareholders.

Harley is shipping more bikes to dealers to get inventories to targeted levels. But without sales, those new bikes will again face the prospect of gathering dust on showroom floors. Earnings will eventually be hurt too.

Without any catalysts to move bikes off the lot, Harley-Davidson's third quarter is going to see more of the same, and ultimately that will damage the bike maker's reputation and hurt the premium positioning it is fighting so hard to maintain.