Find out why these stocks missed out on the rally.

Thursday saw another good session on Wall Street, as major benchmarks started November on a positive note after posting their worst monthly results in years during October. The Dow Jones Industrial Average finished over 250 points higher, and the Nasdaq Composite saw even stronger percentage gains of more than 1.5%. Investors largely pointed to good earnings and encouraging economic news in powering indexes higher, but a few stocks weren't able to jump on the coattails of the broader market. Spotify Technology (SPOT -1.05%), Wayfair (W -4.27%), and Encana (OVV -6.14%) were among the worst performers on the day. Here's why they did so poorly.

Spotify gets some static

Shares of Spotify Technology fell 6% in the wake of the company's third-quarter financial results. The streaming music provider said that it managed to boost traffic, with monthly active users rising 28% year over year to 191 million and premium subscriber counts growing 40% to 87 million. Yet investors were troubled by the slowing pace of projected growth. With many different players in the streaming music space, Spotify is having a hard time differentiating itself, and with stock analysts looking unfavorably on the company's prospects, Spotify CEO Daniel Ek and his team need to prove it can develop a lasting competitive advantage that will make it stand out from the crowd. 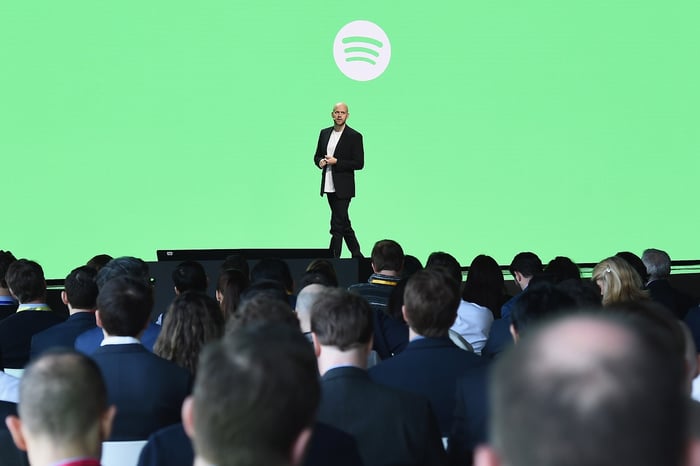 Wayfair stock plunged 13% after the company released its third-quarter financial results. The online furniture and home furnishings retailer continued to report extremely strong growth, including a 43% jump in revenue and active customer counts that were 35% higher than year-ago figures. However, weaker gross margin reflected cost pressures, and adjusted losses almost doubled from the third quarter of 2017 on a per-share basis. E-commerce stocks have been notorious for valuing revenue growth regardless of posting net losses, but boosting volume of sales at loss-leader prices isn't a business model that will be viable in the long run.

Finally, shares of Encana lost nearly 13%. The Canadian shale company said Thursday that it would acquire industry peer Newfield Exploration (NFX) for roughly $4.2 billion. Under the terms of the deal, Newfield investors will get 2.6719 shares of Encana for every Newfield share they own, and that sent Newfield soaring by 16%. Even with Encana paying a premium, some analysts believe that the energy company is getting a screaming deal on Newfield, especially given the opportunity for Encana to add Newfield's exposure to key shale plays in Oklahoma to its existing holdings in the Permian Basin and the Montney Formation in western Canada.