Yum China hasn't been perfect since gaining independence from former parent Yum Brands a couple of years ago. With woes at Pizza Hut combining with a slowdown in Chinese consumer spending, the company's shares have been bogged down this year and are sporting a 10% decline as of this writing. Worries aside, though, fried chicken alone is popular enough that it could float Yum China's stock for years to come.

The favorite food on the other side of the globe

Pizza Hut continues to drag down KFC, but the fried chicken chain's strength continues to pull results higher. During the third quarter, 6% growth at KFC offset a 2% decline at the pizza segment, good for 4% total revenue and 16% earnings-per-share growth compared with a year ago.

That builds on modest revenue gains to date in 2018, which have translated into strong double-digit increases in the bottom line.

Though Yum China rejected a buyout offer over the summer from private Chinese investor Hillhouse Capital that sent share prices down, management has doubled down on its bullish outlook. It repurchased 2.7 million shares during the third quarter for $93.7 million, and another 3.4 million shares were bought in October alone (which falls in the fourth quarter) for $110 million.

The total buyback program was recently increased to allow for another $1 billion to be purchased. That's an aggressive move, especially considering Yum China's entire market cap is just $13.6 billion. Even though business isn't exactly firing on all cylinders, Yum China's top team has plenty of reason to be so optimistic. 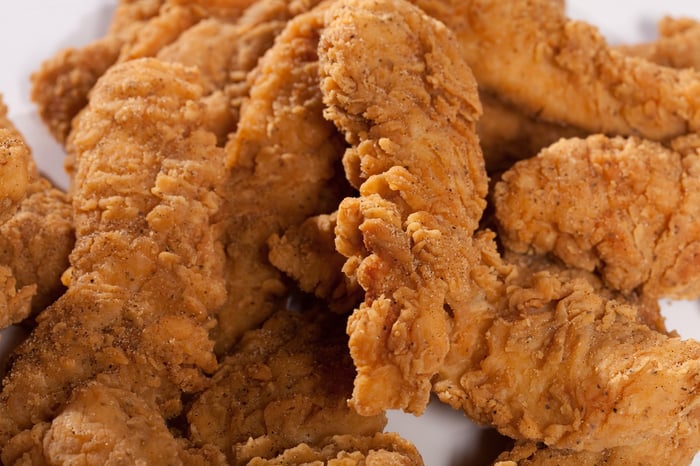 Chicken is enough runway for now

It's great news that KFC continues to perform so well. The chain is king of the restaurant hill in China and by far Yum China's most valuable asset. Of the 8,313 locations Yum China had at quarter end, 5,800 of them are KFC. Because the Chinese consumer continues to overwhelmingly support the fried chicken brand in spite of an overall slowdown in spending in China, new locations are being opened at an aggressive pace.

New KFCs are popping up at an 8% rate this year to Pizza Hut's 5%. That's because Pizza Hut is still sorting through its problems as it tries to connect with the younger Chinese demographic. Fried chicken, on the other hand, is still hip. Existing stores keep yielding higher results, and new openings are being well received. To build on that momentum, Yum China has been expanding its menu to promote other meal times at KFC -- like breakfast, dessert, and midday coffee and tea.

Yum China sees having 20,000 stores in China over time. With only 8,313 as of quarter end, that may seem like a far-off goal. But at the current average rate of new openings -- 7% because of the aggressive new KFC builds -- the company will reach that target in about 13 years.

That should equate to big gains in sales. However, given Yum China's track record so far in coaxing even more profit out of KFC, this restaurant stock looks like a great long-term play on China's still-developing middle class.