Many skittish investors are still avoiding the retail sector. These stocks show why that's a bad idea.

Many investors avoid the retail industry. That's been understandable over the past few years, as low profit margins, inventory-bloated balance sheets, and wage and cost pressures have been a toxic combination. Since 2015, there have been approximately 60 bankruptcies in the industry.

However, there is money to be made by investing in well-run retailers that are winning market share and positioning their companies for the long term. We asked three Motley Fool contributors for their best retailers to buy in November. Read on to find out why Costco (COST -1.05%), Amazon.com (AMZN -0.50%), and American Eagle Outfitters (AEO 0.29%) made their lists.

Costco is primed to profit from trade wars

Demitri Kalogeropoulos (Costco): World trade skirmishes are set to push costs higher for most retailers, including Costco, over the coming quarters, but let me tell you why that's good news for the warehouse giant.

Start with the fact that the retailer's business has never been stronger. Customer traffic climbed by 5% last quarter, keeping Costco far ahead of chief rival Walmart. Its membership renewal rates improved to over 90%, too, even though subscribers are paying a higher annual fee these days for the ability to shop at Costco's warehouses. 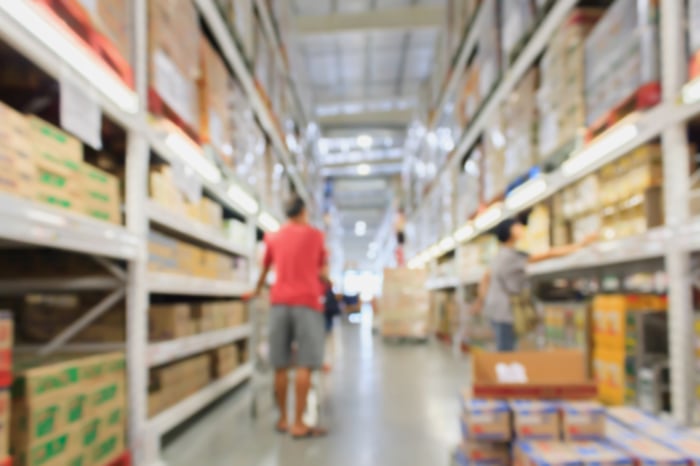 Those wins, plus the company's traditional assets -- including a massive sales base and efficient operating model -- should help it widen its lead as the industry's low-price specialist.

Peers will struggle more with having to choose between slower growth and steady profits while Costco's membership-fueled earnings continue marching higher. And to the extent that rivals do raise prices to protect their margins, it should open the door for the warehouse giant to steal more market share. In any case, the future looks bright for the world's second largest retailer heading into the holiday season crush.

Buy Amazon for its retail operations... and so much more

Jamal Carnette, CFA (Amazon.com): Over the past decade, there's been no bigger development in the retail landscape than the shift to e-commerce. No company has personified that shift better than Amazon.

According to eMarketer, the company commands a massive 49% market share of all e-commerce in the United States. And this industry still has a long runway for growth: E-commerce makes up less than 10% of total U.S. retail sales, but it's growing rapidly, at a rate of 15% per year. However, Amazon is more than simply a retailer. In fact, the company's profit center is not in retail, but in its higher-margin Amazon Web Services (AWS) cloud computing operations. Although total revenue increased 29% yearly last quarter, cloud revenue increased 46%.

Comps rose 9% last quarter, supported by 7% comps growth at American Eagle and 27% growth at Aerie, its smaller lingerie and activewear brand for young women. Its margins are also expanding, so it isn't driving sales growth with aggressive markdowns.

The company attributes its strong and steady growth to robust demand for its jeans and other bottoms, rebounding sales of men's apparel, "speed sourcing" strategies to counter fast-fashion challengers, and fresh marketing campaigns for Aerie -- which carved out a niche as the "anti-Victoria's Secret" with its body-positive ads.

American Eagle was also the second favorite clothing brand among American teens, after Nike (NKE 2.57%), according to Piper Jaffray's "Taking Stock With Teens" survey for fall 2018. It also owned the third most popular teen shopping website, after Amazon.com and Nike.

These facts all indicate that American Eagle Outfitters will post strong sales during its third and fourth quarters. Analysts expect its revenue and earnings to rise 6% and 29% this year -- which are solid growth rates for a stock that trades at 15 times this year's earnings. The company also pays a decent forward dividend yield of 2.3%. Therefore, it makes sense to buy this stock before it reports its third-quarter earnings in late November.