Please ensure Javascript is enabled for purposes of website accessibility
Log In Help Join The Motley Fool
Free Article Join Over 1 Million Premium Members And Get More In-Depth Stock Guidance and Research
By Daniel Sparks – Nov 3, 2018 at 10:13AM

Despite flat iPhone sales in Q4, the tech giant's business is growing at a surprising rate.

A glance at much of the media coverage surrounding Apple's (AAPL -1.51%) earnings report earlier this week presents quite a gloomy picture for the stock. With headlines referring to worse-than-expected iPhone sales, management's "cautious" outlook for the holiday quarter, analyst downgrades, and the stock's move lower after the report, it could be tempting to conclude the tech giant is facing some troubling times.

Yet Apple's business is faring better than many headlines about the company's latest earnings report would suggest. For instance, Apple's earnings per share during the quarter were up an incredible 41% year over year. To get a more objective view of how the company is doing, sometimes it's useful to simply take a look at the raw numbers. To this end, here are five of the most insightful metrics from Apple's fourth-quarter update. 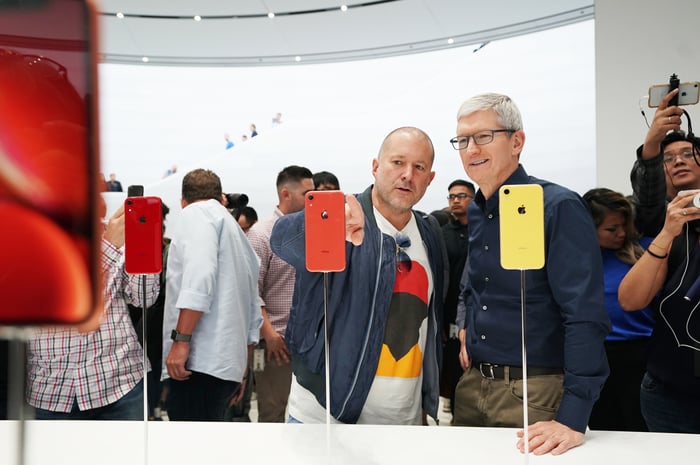 Apple's revenue rose 20% year over year, driven by strength in its iPhone, services, and "other products" segment. This growth rate was up from 17% year-over-year revenue growth in its third quarter of fiscal 2018. And this was its eighth consecutive quarter of accelerating growth.

The worse-than-expected iPhone sales the media is referring to are unit sales. The company sold 46.89 million iPhones -- below a consensus analyst estimate for 47.5 million. But should investors really be concerned? iPhone revenue during the quarter soared 29% year over year thanks to a much higher average selling price than analysts were expecting. iPhone average selling prices for the quarter came in at $793 -- a whopping $42 above what analysts were modeling for.

The company's services segment had its best quarter ever in Q4, with segment revenue rising 17% year over year to $10 billion. And even this strong growth rate understates how well the segment is doing. Adjusting to exclude the impact of a favorable one-time accounting adjustment in the year-ago quarter, services revenue was up 27% year over year.

As part of its aggressive capital return program, the company spent $19.4 billion repurchasing 92.5 million shares during the quarter. Including the $3.5 billion it paid in dividends during the period, the company returned over $23 billion to shareholders.

Helped by both Apple's 20% increase in revenue, and the company's fatter gross profit margin during the quarter versus the year-ago period, fourth-quarter net income increased an impressive 32% year over year to $14.1 billion. When you combine this strong net income growth with the impact of Apple's share repurchases since the year-ago quarter, EPS skyrocketed 41% year over year.

Sure, the company's guidance for just 1% to 5% year-over-year revenue growth in its fiscal first quarter of 2019 may be somewhat of a disappointment given the company's reinvigorated product lineup headed into the holidays. But Apple's business isn't just doing fine -- it's firing on all cylinders.