Please ensure Javascript is enabled for purposes of website accessibility
Log In Help Join The Motley Fool
Free Article Join Over 1 Million Premium Members And Get More In-Depth Stock Guidance and Research
By Lee Samaha – Nov 3, 2018 at 7:18AM

When an industry leader gives a bullish forecast in a key end market, it usually makes sense to take notice.

The Boeing Company (BA) is bullish on air cargo demand, and that could be good news for package delivery companies United Parcel Service (UPS) and FedEx Corporation (FDX). Let's look at what Boeing's latest long-term forecast for air cargo traffic means, and why it's important for the investment case for all three stocks.

Every two years, Boeing publishes its World Air Cargo Forecast, and this year's forecast had plenty of good news for the freight industry. The key highlights from the report:

In a nutshell, the forecast is positive for Boeing as it implies strong demand for wide-body freighters -- supporting Boeing CEO Dennis Muilenburg's belief in a pickup in wide-body demand at the start of the next decade. And it suggests support for the narrow-body market, as Boeing estimates 1,170 standard-body aircraft will be converted to freighters in the period. 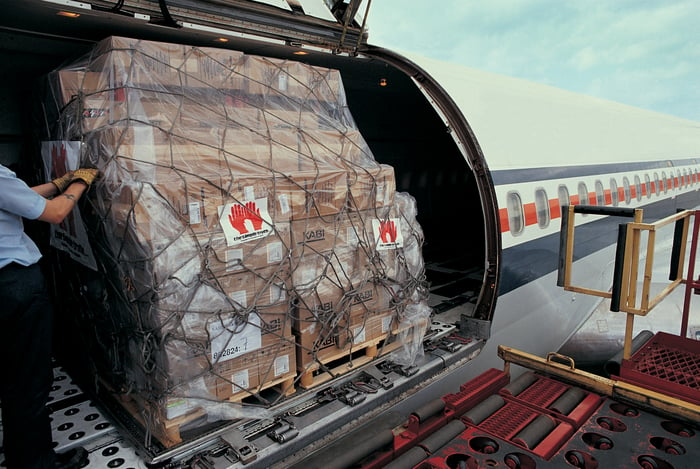 If Muilenburg is right about a boost in wide-body orders coming from replacement demand in commercial aviation -- with airlines seen as waiting for Boeing's new 777X to enter production -- and a pickup in freighter demand, then Boeing's traditional leadership in wide-body aircraft will come to the fore.

For reference, the forecast calls for the worldwide freighter fleet to expand by more than 70% from 1,870 planes to 3,260 in 20 years, a growth rate of 2.8% per annum. Throw in demand for wide-body passenger aircraft (Boeing estimates the global wide-body passenger fleet will increase by around 8,200 in the next two decades), and overall wide-body airplane growth of around 4.9% per annum looks possible -- good news for Boeing.

UPS and FedEx will also benefit

If Boeing's projection of 4.2% annual growth in cargo traffic over the next 20 years is correct, then it stands to reason that UPS and FedEx will also benefit significantly, particularly if e-commerce is a large reason behind the growth. Both companies have been significantly investing in building out infrastructure.

As you can see below, the 2011-2016 period saw sluggish growth, and it's only in the last two years that cargo growth has been above 4% for two consecutive years -- the first time in over a decade. 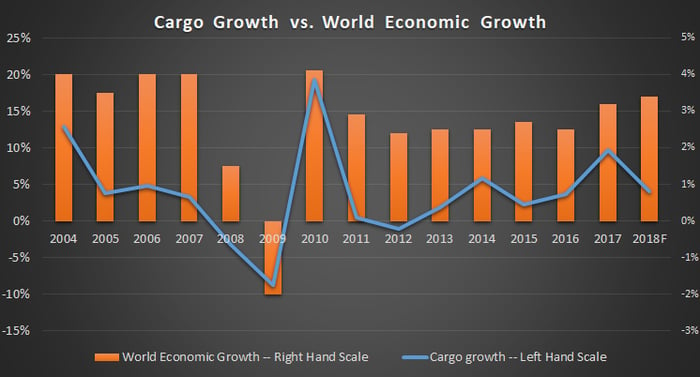 A sustained expansion in global trade will obviously benefit both companies, not least because FedEx has invested to expand its European presence by acquiring TNT Express.

Meanwhile, UPS recently announced a series of so-called "transformational initiatives," which include continuing the expansion of its high-growth international markets. UPS has increased intercontinental air-express capacity by more than 10% as new, higher capacity cargo jets are added to its fleet.

The company has completed about two-thirds of its previously announced European network expansion and has recently opened new "super hubs" in Paris and London, according to the press release on the transformation initiatives.

Both companies have positioned themselves for long-term e-commerce and cargo growth. And if Boeing is right, then the package delivery companies will see that growth.

It's easy to criticize Boeing's report as a self-serving exercise in talking up demand for its wide-body aircraft. But it appears to be based on solid fundamentals and assumptions regarding trends (growth in cargo traffic and e-commerce) that are already in place. Indeed, UPS and FedEx are clearly preparing themselves.

Based on current trends, Boeing's optimism is justified. The real question is: Can these trends continue over the long term? The answer is likely to be that economic growth and cargo growth will fluctuate over time, but notwithstanding that, e-commerce growth looks assured. All told, provided there isn't an escalation in trade tariffs in the long run, then Boeing's forecast looks sound -- and UPS and FedEx will see the benefit, too.