An underrated biotech, a boring industrials play, and an intriguing cloud company: Here's why these growth stocks deserve your attention.

Smart, in-the-know investors can spot opportunities where others can't, and that could easily generate market-beating returns if they can get their hands on some growth stocks.

Growth stocks are shares of companies with sales and profits expanding at a faster clip than the industry. Their outperformance should eventually be reflected in the stock prices.

Before you begin to wonder where to find such growth stocks, three of our Motley Fool contributors have some noteworthy recommendations for you today: A.O. Smith (AOS -1.37%), HubSpot (HUBS -0.18%), and Repligen (RGEN -4.58%).

A hub of innovation

Chris Neiger (HubSpot): Businesses of all sizes need help with their online marketing, from advertising to search engine optimization and social media. There's a lot to think about. And that's where HubSpot comes in. The company allows its customers to easily manage all of these services from its cloud-based platform and even gives them access to services through a freemium business model to get them hooked on its services.

HubSpot's growth has been impressive, with sales climbing 39% in the most recent quarter to $441 million and customer growth up 40% to 48,000. Previous quarters of strong growth have led investors to push HubSpot's shares up about 50% over the past 12 months, compared with the S&P 500's 4% gains. 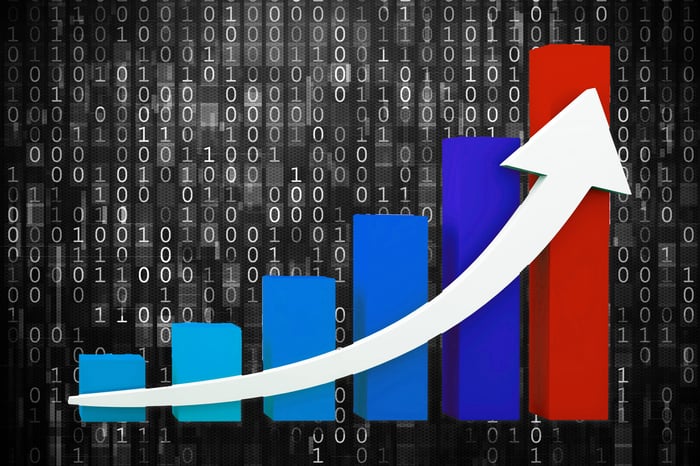 Growth stocks can heal you beat the market in the long run. Image source: Getty Images.

The company's growth isn't confined to just North America, either. Since 2014, HubSpot has expanded the percentage of revenue it receives from its international customers from 22% of sales to 37%. If that weren't enough, HubSpot's non-GAAP gross margin has been at an impressive 81% for four consecutive quarters, up from 78% two years ago.

HubSpot's shares are trading at 11.4 times the company's sales, which is far from bargain-bin prices, but the premium investors are paying is likely to come with continued sales and customer growth, as HubSpot introduces more services to keep current customers engaged and add new ones.

Can you see what the market can't?

Neha Chamaria (A.O. Smith): A.O. Smith shares have been beaten up this year, down about 22% year to date. Tariffs on items such as steel and aluminum and the ongoing trade tiff between the U.S. and China are largely to blame, as these factors are driving A.O. Smith's costs higher while hurting demand from the key market of China.

Yet if you can look beyond the macro headwinds that the company can do little about, A.O. Smith remains one of the top growth companies in the unappealing water-heater space. 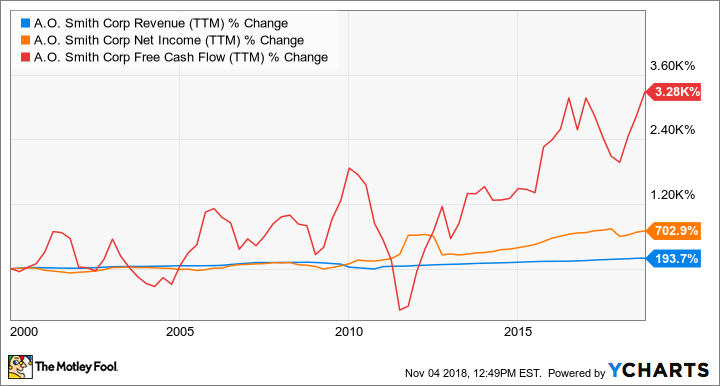 There's more: A.O. Smith has earned double-digit returns on equity and invested capital since the beginning of the decade, and it joined the elite Dividend Aristocrats group this year, having increased its dividends for at least 25 consecutive years. Just last month, management announced a 22% dividend increase, ratcheting up its compound annual growth for the past five years to a solid 30%. In fact, this was the second such dividend increase for A.O. Smith in 2018 alone.

A challenging third quarter recently compelled management to tone down its full-year outlook, but A.O. Smith still expects revenue to be 7% higher this year, which should be a sales record. On the earnings front, management foresees 19% growth at the midpoint in adjusted earnings per share -- which excludes the impact of one-time charges related to U.S. tax reform -- with strong cash flows to boot.

A.O Smith's long-term story remains intact as it strives to expand its footprint in countries such as China and India, while leveraging on replacement demand back home in the United States. A.O. Smith's growth is hard to ignore, and so are its growth catalysts.

Maxx Chatsko (Repligen): While there's no denying that this biotech stock is expensive, the business also has a remarkably clear runway for long-term growth. Repligen doesn't develop drug candidates or sell marketed drug products. Instead, it sells equipment and products that are required to manufacture and purify biologic drugs. As more and more biopharma companies emerge to develop novel antibody drugs and their generic counterparts, called biosimilars, the company's growing portfolio of bioprocess equipment will be in increasingly high demand.

Just look at the recent third-quarter 2018 operating results. Repligen delivered record quarterly revenue of $49.5 million, good for 35% year-over-year growth. That allowed management to raise full-year 2018 revenue guidance to a midpoint of $192.5 million. The business enjoyed a gross margin of over 55% in the most recent quarter and has realized an operating margin of nearly 13% in the first nine months of this year.

Biomanufacturing may not be as sexy as drug development, but long-term investors have been handsomely rewarded by Repligen's execution within its all-important niche. The stock has gained 1,460% in the past 10 years. While another 10-bagger would be difficult to come by in the next decade, the $2.4 billion business has plenty of growth ahead of it thanks to a great product lineup and partnerships with other biomanufacturing leaders, such as Sartorius Stedim Biotech, another under-the-radar company. Repligen is a great growth stock for any portfolio with a long-term focus, although those starting new positions may want to wait for a pullback before jumping in.