The latest data shows that more than half of American households will soon be Prime members.

Amazon.com's (AMZN 0.79%) Prime membership program -- which gives subscribers free two-day shipping, discounts on some products, and services like Amazon Prime Video and Amazon Music -- will count more than half of all U.S. households as subscribers next year, according to the latest eMarketer data.

The research firm estimates that the number of Prime membership households will reach 63.9 million in 2019, which would represent 53.1% of American households.

It's no secret that the popular Prime program has been growing quickly, but it becomes even more evident when you look at a chart of its growth over the past several years and where it's headed between now and 2020. 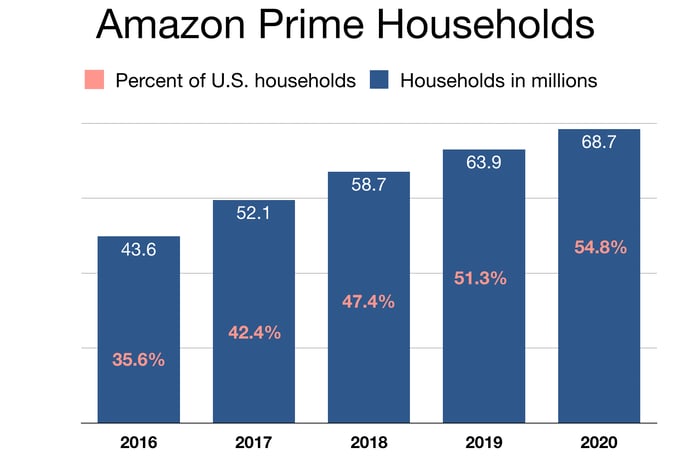 Prime is, of course, just one aspect of Amazon's business. But the subscription service is essential to Amazon's business model because it's one of the best ways the company has to keep customers tied to its e-commerce site and buying more products on its website. Here's why Prime is such a big deal.

Why Prime matters so much

Not only do Prime members spend more on average, but the longer they keep their Prime memberships, the more they tend to spend. Prime members who have subscribed for longer than three years shell out about $1,500 per year on the e-commerce site, according to CIRP.

All of this spending from Prime members could bring significant gains to Amazon's top line. Citi analyst Mark May estimates that Prime-related gross sales could reach $500 billion per year within a decade.

If all of that weren't enough for investors to see Prime's massive potential for Amazon, there's a second, more subtle benefit as well. The more Prime members Amazon has, the more valuable its platform becomes to companies that sell ads and sponsored product listings on the company's site. 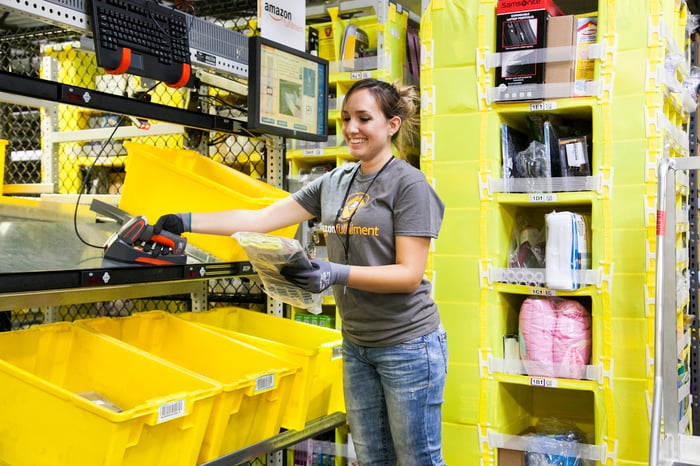 Amazon recently became the third-largest digital ad platform in the U.S., behind Facebook and Alphabet, and its advertising business is poised to become a bigger part of its overall sales in the coming years.

The fact is that the more Prime members Amazon has, the more they spend on the site -- and the more advertisers will spend to get their attention.

Why investors should pay attention to Prime

It's clear that Amazon adding more Prime members is already benefiting the company's online and advertising sales. And while Amazon is likely to achieve the milestone of 50% of U.S. households with Prime memberships next year, that still leaves a lot of opportunity for it to gain more households in the coming years.

Investors should view the Prime program as one of Amazon's secret ingredients to growing sales in the coming decade or longer. The great news is that the global Prime membership base is expected to double over the next decade to 275 million members and reach 80% of U.S. households by 2029. For investors trying to find Amazon's next growth catalyst, look no further than Prime.