Consumers can be notoriously hard to predict when it comes to forgiving businesses that breach their trust. Chipotle saw a long-term significant drop in business after its E. coli scandal, while Target recovered from its massive data breach relatively quickly.

In other cases, consumers have ignored data breaches nearly completely, and some food-safety scandals seem to barely impact business. Those frustrating variations make it hard for businesses to determine the actual value of having consumers trust their brands. That's why Accenture (NYSE:ACN) has developed the Competitive Agility Index -- to quantify the impact of trust on a company's bottom line.

"In this age of transparency, how a company does things has become equally important to what it does," Accenture found. "Companies need to very intentionally create a culture of building, maintaining and preserving trust, and bake it into their DNA, strategy and day-to-day operations." 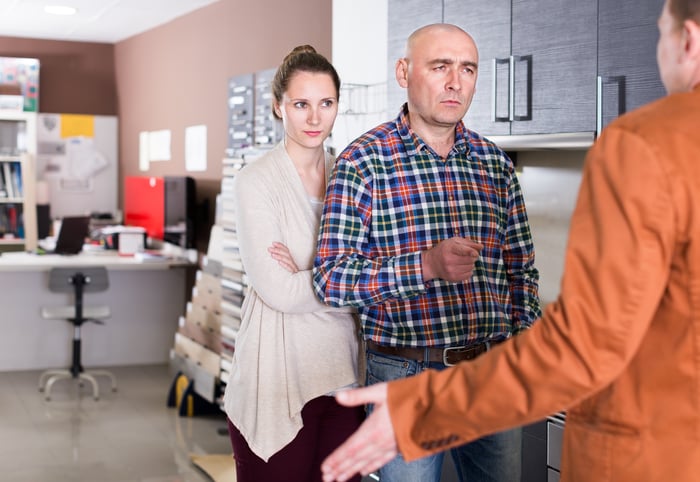 It's not easy to rebuild trust once it has been lost. Image source: Getty Images.

Accenture built the index by scoring more than 7,000 companies "across interdependent dimensions of competitiveness: growth, profitability, and sustainability and trust." It found that more than half of those companies (54%) had experienced "a material drop in trust at some point during the past two-and-a-half years." It also found that the average company that underwent a drop in trust saw its Competitive Agility Index score drop by two points, which puts a company at significant risk of losing revenue.

The company defines a trust incident as "any event or circumstance that results in the loss of real or perceived trust in a company." It then measures the impact across customers, employees, suppliers, media, analysts, and investors.

"When we compared companies that experienced a trust drop to those that did not, we saw a trend," the company reported. "Those that had a drop in trust saw their Competitive Agility Index scores decrease more than those that did not. While trust accounts for a fraction of a company's total score, it disproportionately impacts revenue and EBITDA." 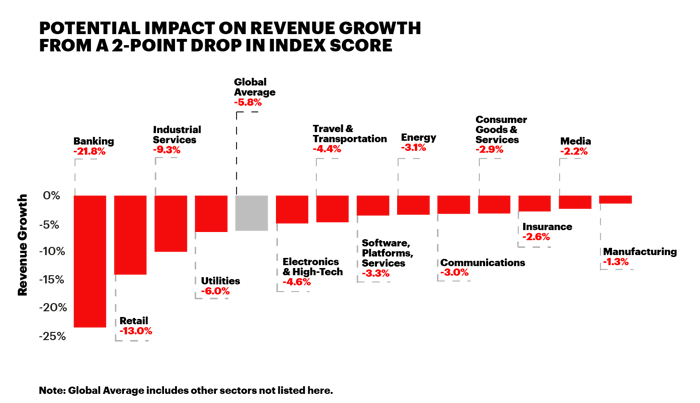 How much does it hurt?

As you can see in the chart above, a two-point drop in index score has a significant impact on revenue. The effect is more evident in consumer-facing sectors, including banking and retail. It's also worth noting that the impact is smallest in sectors like insurance and communications where trust may not be all that high to begin with.

No matter how a company operates, it's nearly impossible to completely avoid trust issues. That doesn't mean it can't do something to protect its bottom line.

"Companies can prepare by having a strategy that balances growth, profitability, sustainability and trust," according to the report. "Doing so can mean fewer trust incidents. And, when an incident does strike, the balanced strategy helps minimize its impact."

Basically, surviving a breach in trust gets easier when a company already has a strong foundation of trust. That means that companies must place a strong value on building trust before they have an incident if they hope to minimize financial impact.