The retailer is up by as much as 20% after reporting earnings.

Office supply retailer Office Depot (ODP -1.45%) reported its third-quarter earnings Wednesday morning, and investors appear to be impressed with the results. As of 11:30 a.m. EST, the stock is up by about 20% -- on pace for its highest one-day increase since early 2015.

Office Depot beat expectations on the top and bottom lines. Earnings of $0.13 per share were $0.01 more than analysts had hoped to see, and revenue of $2.89 billion also came in ahead of what expectations called for and represented 10% year-over-year sales growth. The company also reported that it has generated $434 million in free cash flow through the first nine months of the year, which was more than it had previously expected for the entire year. 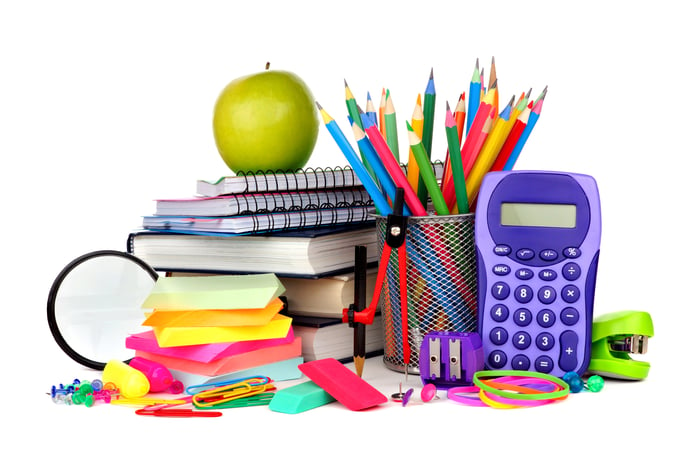 Even more importantly, Office Depot issued increased 2018 guidance. The company now expects full-year sales of $11 billion, $200 million above the previous estimate, which could indicate that management expects a strong holiday quarter. And free cash flow is now expected to come in at $450 million.

Guidance for 2019, which was also given along with third-quarter earnings, calls for sales of $11.1 million. This would represent growth of about 1% from 2018, but investors are likely encouraged to see any signs of growth, given the ultra-challenging retail environment.

"Overall, we are making great progress on our transformation and remain confident that we have the right strategy in place to drive sustainable, profitable growth in the future," said CEO Gerry Smith in the company's press release.

To be clear, Office Depot has been struggling to adapt to the changing retail landscape for some time now. Even after today's pop, shares are down by more than 57% over the past three years.

Having said that, the boost in revenue and improved guidance are certainly music to investors' ears as the company heads into the critical holiday quarter. If they can keep the momentum going, there could certainly be more gains.