The jettisoning of Grand Canyon University makes it tough to understand where the company is. Here's what we know.

In the history of earnings releases, Grand Canyon Education's ( LOPE -0.41% ) quarterly report may go down as one of the densest and most difficult to decipher. That's because up until the start of the current school year, it was your standard for-profit educator.

But that all just changed.

After the decision to split the school -- Grand Canyon University (GCU) -- off into a nonprofit entity, investors are left owning shares of a services company. Grand Canyon Education (GCE), the company shareholders have a stake in, provides technology, counseling, marketing, tax, and financial aid services to GCU. In return, GCE gets 60% of GCU's tuition, plus it can offer its services to other schools.

The market didn't like its first peek at this new entity, sending shares down as much as 10% as of this writing. But was it really that bad? Let's try to put the pieces together. 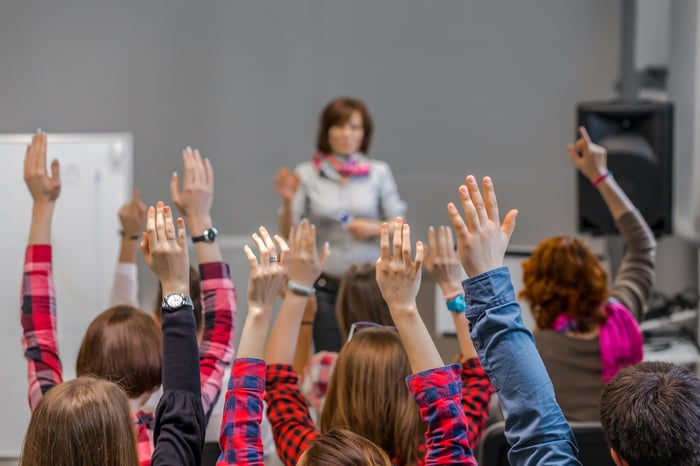 First, we'll give you the standard numbers that are often reported with earnings releases.

As GCU is the only school GCE is offering services to at this point, the enrollment figures are still very important to follow. More students means more tuition -- and 60% of a higher number is a good thing for investors. Both on-campus and online enrollments were up 8% -- slightly exceeding management's own guidance.

Interestingly, the company observed that one of the things holding enrollment down was that students on campus are often graduating in under four years! CEO Brian Mueller stated the following: "Enrollment growth has been pressured by significant year-over-year increases in graduations. This has been [caused] not only by the recent growth in total enrollment, but also due to the high percentage of our students that are graduating in under four years."

But because of the massive transition in the business, the revenue and earnings figures are obviously not an apples-to-apples comparison. As such, management attempted to model one for investors, assuming that in the third quarter of 2017 a similar agreement was in place. Here's what that comparison looks like.

Data source: Grand Canyon Education. Because figures were rounded to the nearest million, percentages might not match displayed figures.

One of the key line items making adjusted EPS look so much higher is the backing-out of a $15.6 million loss on the transaction between GCU and GCE upon the closing of the agreement.

On the whole, this doesn't look nearly as bad as the stock's 10% decline indicates. Heck, earnings grew three times as fast as sales!

Then again, the company's stock had a significant run-up leading up to earnings, and now is back to where it was as recently as late October.

The bottom line is that operating expenses fell 40%. That's because spending on university-related expenses fell from $84 million last year to just $7 million this year. While increases in counseling and marketing spending offset some of those efficiency gains, they highlight how much leaner this new operation has the potential to be.

What opportunities are on the horizon?

The big question for long-term investors is simple: Will GCE simply serve GCU, or are its internally developed software tools really good enough to draw interest from others? Addressing that point on the conference call, Mueller -- who also serves as the president of GCU -- highlighted GCE's capabilities in the following third-quarter metrics:

There were several questions from analysts on the conference call about potential partnerships with other schools to use some of these services. Mueller said the most interest came from schools looking for help in their online program management (OPM). While GCU has a physical campus, the majority of its students are online -- so this is an area where GCU has lots of experience.

Investors may want to consider trusting Mueller's careful, wait-and-see approach. In response to an analyst's question on the timing of new client acquisition, the CEO indicated that depending on certain factors over the next few months, CGE might have its next institution signed up by August or September of next year.

In other words, while some announcements might be made between now and September 2019, don't expect any revenue to start flowing to GCE from its new opportunities until then.

Shrinking our timeline a bit, the outlook for the fourth quarter is as follows:

The bottom line is this: An investment in Grand Canyon is premised on the potential for future customers outside of GCU. Time will tell when and how those partnerships might be formed.