With their powers combined, Apple’s margins could take a tiny hit.

Apple (AAPL 0.66%) is still years ahead of the competition when it comes to 3D facial recognition, which enables its headline Face ID technology. That technology is made possible by vertical-cavity surface-emitting lasers (VCSELs) that project infrared (IR) dots onto the user's face, which are then captured by an infrared camera that uses structured light imaging to create a depth map. Apple first introduced Face ID last year and has now brought it to the iPhone XR and iPad Pro.

One of the reasons why the iPhone X suffered from supply constraints last year was that the VCSEL industry wasn't able to produce the types of unit volumes that Apple needed, as suppliers were suffering from low yield rates. That was why the Mac maker made a massive bet on 3D sensing, awarding supplier Finisar (FNSR) a massive $390 million that it could use to build out capacity (which was really just a prepayment for future orders of 3D sensing components). Fellow VCSEL supplier II-VI (IIVI -0.79%) just announced that it is acquiring Finisar. 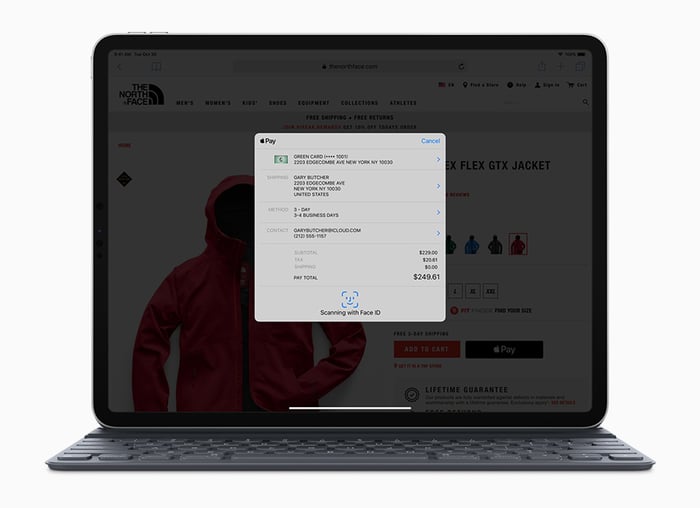 II-VI will acquire Finisar in a cash and stock transaction that values Finisar's equity at $3.2 billion. Shareholders will receive $15.60 per share in cash and 0.2218 shares of II-VI stock for every Finisar share (valued at $10.40 per share based on yesterday's closing price for II-VI), subject to proration. That pegs Finisar's value at $26 per share, a 38% premium over yesterday's close for Finisar. Finisar investors would own roughly 31% of the combined company.

The combined company will be better positioned to capitalize on numerous growth markets. "Together, we believe that we will be better strategically positioned to play a strong leadership role in the emerging markets of 5G, 3D sensing, cloud computing, electric and autonomous vehicles, and advanced microelectronics manufacturing," II-VI CEO Dr. Vincent Mattera said in a statement. Dr. Mattera will serve as CEO of the combined company.

II-VI and Finisar expect to realize $150 million in cost synergies within 3 years of the deal closing. II-VI is funding the transaction with cash on hand, issuing shares, and taking on $2 billion in additional debt. The deal is expected to close in mid-2019.

How this could affect Apple

It's never a great thing for a customer when two companies supplying similar components consolidate, as that reduces competition. While II-VI and Finisar combined will present a greater threat to rival Lumentum Holdings (LITE 1.98%), which is Apple's largest 3D sensor supplier, the net result will likely be reduced price competition in the broader market for 3D sensing components. In general, pitting suppliers against each other is a key tool that companies use to reduce component costs. Once the deal closes, Apple could potentially face modestly higher costs for 3D sensing components.

The silver lining is that 3D sensing components make up a negligible part of Apple's overall cost structure. Those ingredients aren't nearly as significant as other components like NAND memory, whose volatile pricing swings have a huge impact on Apple's costs and gross margin profile.