Please ensure Javascript is enabled for purposes of website accessibility
Log In Help Join The Motley Fool
Free Article Join Over 1 Million Premium Members And Get More In-Depth Stock Guidance and Research
By Rich Duprey - Nov 10, 2018 at 9:27AM

Particularly one that will collect even more user data than the social media site already does?

Facebook (META 7.19%) seems to be jumping into making hardware devices because everyone is coming outwit cool, new gadgets, but another streaming device is the last thing the market needs and could divert resources from other projects that have a better chance of succeeding. 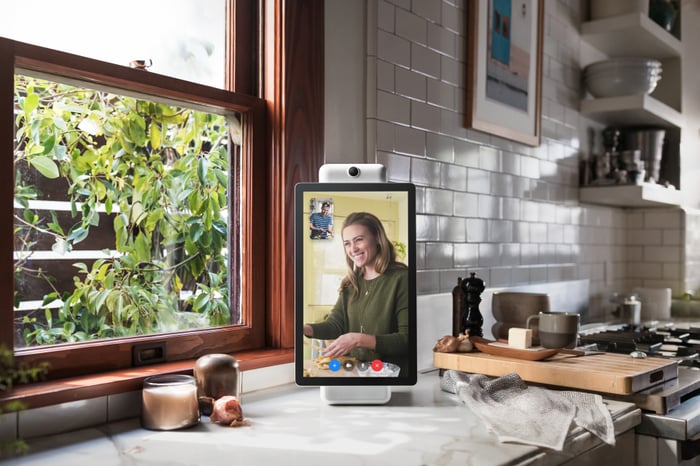 A portal to video streaming

Having just announced Portal, smart speakers that incorporate artificial intelligence-enhanced cameras to enable video chat, it's rumored Facebook has another project in the works for next year that would go a step further.

Ripley was discovered in Portal's Facebook for Android code and   seems to be an ambitious set-top device that incorporates Portal's AI,  but also includes streaming capabilities from both Facebook Watch and third-party providers.

First reported by Cheddar, the new device could be announced as early as next spring, and because of its comprehensive capabilities, could seek to challenge Roku (ROKU 2.85%), Amazon.com (AMZN 3.58%), and Apple (AAPL 2.45%) for a piece of the consumer living room. Where the boxes and dongles of those providers typically have a narrower focus, Facebook seems to be trying to break into the market by making Ripley a multifunctional prescription for connectivity.

However, Facebook will have to get over high hurdles just to get the marketplace to accept Portal, let alone another device that goes beyond those capabilities.

Facebook has developed a reputation for playing fast and loose with user privacy concerns. That has already affected the company's hardware ambitions, with data breaches delaying the social networking site's announcement of Portal to last month. To make things worse, Facebook was immediately caught misstating what it intended to do with the data gained the Portal device.

Where Facebook had promised it would not use any data collected by Portal for advertising purposes, Recode discovered that Facebook would actually use some of the collected data for targeted advertising. Facebook admits that while Portal would collect the data, it doesn't actually plan on using it for that purpose. Considering Facebook's poor record on privacy, it might have a difficult time persuading people to believe it.

A brand with a stronger reputation for privacy might have a better chance of succeeding, because a device that could go beyond simple streaming might find some traction, but breaking through the hegemony of Roku and Amazon (and to a lesser extent Apple or even Google) is going to be difficult nonetheless.

Video is the future

Roku remains the biggest streaming-device manufacturer, with a 37% share of the market, followed by Amazon at 28%, though a new Alexa-enabled Fire TV Stick 4K could narrow the gap considerably. Apple and Google distantly follow with just 15% and 14%, respectively. For Facebook to break into the ranks in any meaningful way, it would have to put an end once and for all to its inability to protect user data.

The fact that it would have Facebook Watch videos built in is hardly an incentive to get the device.

In its third-quarter earnings report last month, Facebook acknowledged it wasn't adding any new users in the U.S. (and was losing them in Europe), and though Facebook Watch was still growing, CEO Mark Zuckerberg had to admit it was trailing far behind Alphabet's (GOOG 5.20%)(GOOGL 5.11%) YouTube. More telling was his comment that people don't look to Facebook for video, even if they watch it passively as it scrolls through their newsfeed. They come for social interactions.

Besides, it's not much of a moneymaker either. "Video monetizes significantly less well per minute than users interacting in feeds," Zuckerberg told analysts.

Still, video accessed through a device separate from the Facebook platform might fare better, and Zuckerberg said video is a critical part of Facebook's future, so long as Facebook can make it social. But that doesn't seem to line up well with Ripley's purpose, and would require a massive investment to take on the streaming titans that exist.

Because Facebook has yet to get ahead of the story on privacy concerns -- even flubbing it as it announced Portal -- it seems a streaming device that encompasses technology that could further compromise user data is a sure-fire nonstarter for most.