Please ensure Javascript is enabled for purposes of website accessibility
Log In Help Join The Motley Fool
Free Article Join Over 1 Million Premium Members And Get More In-Depth Stock Guidance and Research
By Timothy Green – Updated Nov 13, 2018 at 8:42AM

The meal-kit company's business model is broken, and it may not have enough time to turn things around.

Struggling meal-kit company Blue Apron (APRN -45.33%) will report its third-quarter results before the market opens on Wednesday, Nov. 14. The company is rapidly losing customers despite sky-high marketing spending, and it's burning through its cash as it tries to turn itself around. But a turnaround doesn't look very likely, and good news will probably be tough to come by in the company's third-quarter report.

Despite a slight increase in marketing spending, Blue Apron continued to hemorrhage customers in the second quarter. This led to a steep decline in revenue, which missed analyst estimates.

Blue Apron spent $34.6 million, or 19.3% of revenue, on marketing during the second quarter. That's up from $34.5 million, or 14.5% of revenue, in the prior-year period. Although the company doesn't disclose customer churn, it's clear from the numbers that customers who sign up for the service aren't sticking around.

One silver lining for Blue Apron was an improvement in its gross margin, driven by efficiencies in food costs and improved fulfillment center operations. Along with cost cuts in areas other than marketing, this helped keep the company's operating loss roughly flat on a year-over-year basis. Blue Apron reported an operating loss of $31 million, good for an operating margin of negative 17%.

Analysts are expecting the third quarter to be rough for Blue Apron, with another doubled-digit revenue decline and continuing losses.

Analysts are expecting Blue Apron's revenue to bottom out this year, returning the growth in 2019. But so far, the company's results have given no indication that the worst is over. 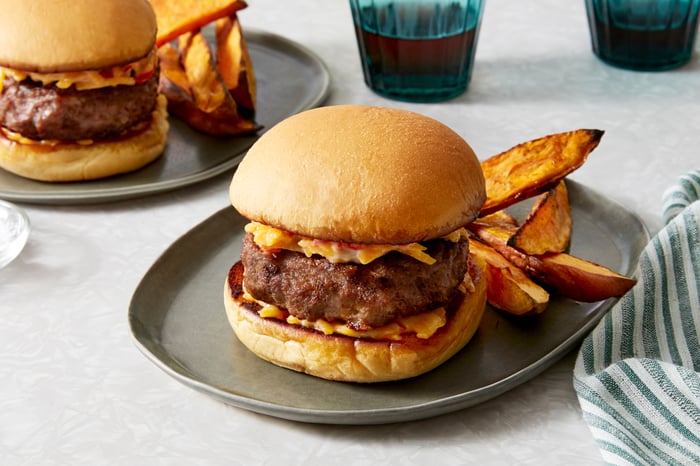 Blue Apron has been trying to shift away from its original subscription meal kit business model by partnering with retailers. That's a good thing, because subscription meal kits don't make much sense. They're essentially overpriced groceries in a box. It's not surprising that customers don't want to pay restaurant prices for ingredients that still need to be partially prepped and cooked at home.

Blue Apron partnered with Costco earlier this year, providing the warehouse club with meal kits to sell in its stores. The company also recently teamed up with Walmart's Jet.com, partnering with Jet's new online grocery delivery service in certain cities. Winning sales without needing to spend heavily on marketing is certainly a good thing. But there's no reason why grocery stores can't do meal kits on their own at a lower cost than Blue Apron. Blue Apron just doesn't have any competitive advantages.

This makes the odds of a turnaround long. Blue Apron's balance sheet affords it a little time -- the company still had $181 million of cash at the end of the second quarter. But it also had $125 million of long-term debt, and its free cash flow was negative $48 million through the first six months of the year. If the situation doesn't improve quickly, Blue Apron may need to raise money sometime next year. And that may be tough given how awful its results have been.

Blue Apron's third-quarter report will probably look a lot like its second-quarter report. There's no real reason to believe that the negative customer trends have improved, and the company's partnership efforts are still too young to offset fleeing subscribers. The stock is already down nearly 90% from its all-time high, but it could go much lower if Blue Apron does even worse than expected.