Blue Apron's (NYSE:APRN) business model of shipping meal kits to customers' homes isn't working. The company is hemorrhaging customers and burning cash, even as it spends a double-digit percentage of revenue on marketing.

The reason for Blue Apron's problems boils down to price. At $10 per person per meal, the company's semi-prepped boxes of ingredients cost as much as a meal at a fast-casual restaurant. Aggressive promotions, like offering big discounts on the first box, are getting customers in the door. But those customers, eventually realizing the stratospheric costs, don't stick around for very long.

Blue Apron's new plan is to sell its meal kits in grocery stores. I suggested this as one of the company's possible paths forward back in December when a new CEO took the helm. A meal kit makes more sense as an occasional indulgence when someone doesn't want to deal with coming up with an idea for dinner, so this plan could help offset slumping subscription sales. But it has one big, probably insurmountable flaw. 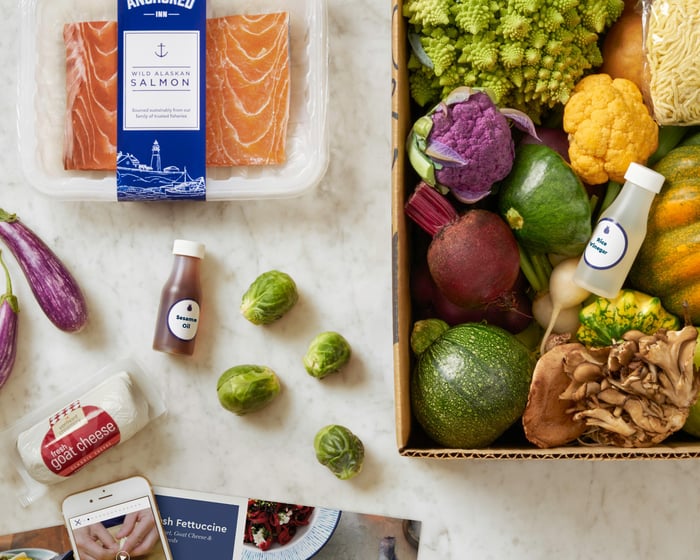 But there's a fundamental problem with this plan. A grocery store, especially one that already produces prepared food in-house, can create its own meal kits with ingredients that are already being shipped to the store. I went grocery shopping at Sprouts on Sunday morning, watching an army of employees make sandwiches, sushi, and other prepared foods for the day. A store like that could make its own meal kits at a lower cost than Blue Apron ever could.

Blue Apron's meal kits might make sense at grocery stores that don't do much in the way of prepared foods, but the company's success will depend on pricing. If Blue Apron tries to sell them for a big premium over the cost of the individual ingredients, available at the same store for much less, this plan isn't going to work.

This isn't going to save Blue Apron

Blue Apron has some deep problems. Free cash flow in 2017 was a loss of $277 million, a staggering sum for a company with annual revenue of just $881 million. Capital spending was elevated as Blue Apron invested in a new distribution center in New Jersey, so free cash flow could improve this year even if the company's results don't.

But even so, with just $229 million of cash on the balance sheet and $125 million of long-term debt, Blue Apron will need to raise more cash soon unless its financial performance improves drastically. Launching a new line of grocery store meal kits, distributed in a completely different way than its subscription boxes, will add to the company's costs. And if Blue Apron has to pay grocery stores for shelf space, it will put further pressure on the bottom line.

Blue Apron needs to try new things, because its subscription business model is a dud. But how many grocery store customers, with the choice between an overpriced box of ingredients and those same ingredients available separately at a much lower cost, are going to opt for the overpriced box? And how many, with the choice between a Blue Apron meal kit and a less expensive meal kit created in-house, are going to pay up for the Blue Apron logo?

My best guess is not all that many.