The maker of high-end wireless audio systems gets a second chance to impress Wall Street. A return to growth is in the cards.

If at first you don't succeed, pump up the volume the second time around. Sonos (SONO -4.44%) posts fresh financials after Thursday's market close, and there's naturally going to be a lot riding on how the maker of high-end wireless speakers fares with its fiscal fourth-quarter results. Sonos disappointed investors in its first quarterly report and failed to impress the market. It can't afford a repeat performance.

Sonos went public at $15 in early August, and after some initial traction -- the stock would peak at $23.60 on its second day of trading -- it has buckled. Sonos is now a broken IPO, waffling about between the pre-teens and low teens. It has closed below its IPO price for the last 32 trading days. A strong earnings release this week can change that. 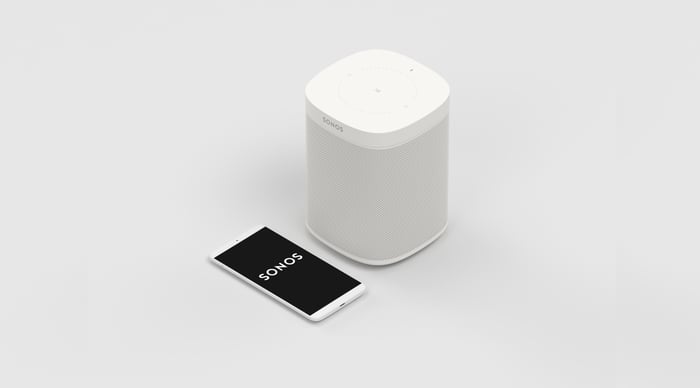 The inventor of multiroom wireless home audio is targeting $10 million to $13 million in adjusted EBITDA for the quarter, more than doubling the prior year's showing. Sonos doesn't offer up bottom-line guidance, but Wall Street pros see the adjusted deficit narrowing to $0.10 a share. Sonos is still a couple of years away from profitability.

Looking back, Sonos picked a lousy time to go public. It had the misfortune of hitting the market just as tech giants picked up the pace in putting out cheap if not subsidized smart speakers and accessories. Sonos has historically aimed for the upscale market, but a glut of "good enough" audio equipment for mainstream audiences with bar-raising tech doesn't make life easy.

Sonos also went public just before its fiscal third quarter came out. It introduced the $699 PLAYBASE -- its first home theater sound base -- a year earlier, a move that amplified revenue for the fiscal third quarter of 2017 as it hit initial demand for its established audience of audiophiles. Sonos warned that revenue would decline in its first quarter as a public company as a result of the PLAYBASE rollout jacking up average selling prices a year earlier, and the nearly 7% decline in revenue in this year's fiscal third quarter was actually kinder than analysts were targeting. The more encouraging metric -- an 11% uptick in total devices sold -- was lost in the totally expected but never encouraging top-line dip.

Thursday's financial update could turn the bearish momentum around. Landing closer to $250 million than $245 million would assure investors that Sonos is either being conservative with its guidance or just flat-out rocking in the growingly competitive tech-savvy audio market. A broken IPO is never a good look, but Sonos is one earnings release away from potentially turning things around.