Please ensure Javascript is enabled for purposes of website accessibility
Log In Help Join The Motley Fool
Free Article Join Over 1 Million Premium Members And Get More In-Depth Stock Guidance and Research
By Dan Caplinger - Nov 15, 2018 at 5:31AM

Big moves have still left long-time investors in the marijuana stock with losses.

Investors have looked at the marijuana industry as a place for potential riches, and many of the small companies that have been first-movers in the cannabis space have produced impressive gains since their initial public offerings. For Aurora Cannabis (ACB 1.31%), success has brought the Canadian cultivator to the New York Stock Exchange, and the company has become one of the highest-profile upstarts in the budding industry.

Yet after several years of extremely large returns, 2018 hasn't been a great year for Aurora Cannabis. Despite having seen big moves higher at times during the year, the hard reality of the ultra-competitive nature of the industry is finally hitting home for some marijuana investors, and that has put a big dent in Aurora stock recently. Now, it's up to the company's fundamental business operations to live up to the hype and prove that it's worth the price investors are paying right now. 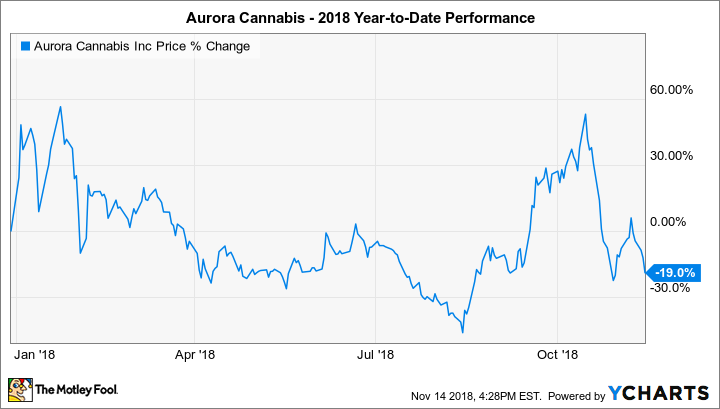 Aurora Cannabis came into 2018 on a high note, with many investors looking for the company to continue its winning ways from previous years. At the time, the bullish thesis for Aurora basically focused on three things: the prospects for the Canadian medical marijuana market to keep growing, the expansion of pot exports to international markets, and the prospects for the legalization of recreational marijuana to open up new opportunities for sales and profit.

Yet one problem that Aurora faced was the need to grow as quickly as possible. That resulted in massive strategic moves, some of which drew criticism. For instance, Aurora ended up paying about $1.1 billion in Canadian dollars ($831 million) to acquire CanniMed, or nearly 80% more than its initial acquisition plans before a bidding war forced Aurora to up its offer. The move bolstered total cultivation capacity, but the cash-and-stock deal diluted existing investors, and it raised the question of whether Aurora paid too much for the acquisition. The May announcement that Aurora would buy MedReleaf raised the stakes further, with the stock deal worth $2.5 billion in U.S. dollars putting Aurora in position to become the leading producer of cannabis in the world -- regardless of the price.

Fundamentally, Aurora Cannabis kept making all the right moves to seek growth. In its fiscal third-quarter results announced in May, the company said that revenue more than tripled to CA$16.1 million. And it's important to note that a substantial portion of its revenue came from areas beyond simple dried cannabis. Cannabis-derived oils, which feature higher margins, were an important source of sales, and the company offered services including design and construction consulting to raise money as well.

Yet a couple of things still lingered for investors. First, dilution was problematic throughout much of the industry, with Aurora in particular being especially guilty of issuing new stock. At the same time, the company failed to attract a major consumer products company to be an investor, essentially a vote of no confidence from the market, compared with rival Canopy Growth and its partnership with Constellation Brands.

That didn't keep Aurora from soaring in the run-up to the legalization of recreational cannabis in Canada from mid-August to mid-October. Yet that move higher also proved to be short-lived, as the reality of harsh competition and logistical difficulties weighed on the rollout.

Can Aurora Cannabis get its mojo back?

Aurora's latest earnings report shows that it's on track with its strategy. Acquisitions have caused sales to skyrocket, and the Sept. 30 quarter ended before Canada's legalization of recreational marijuana took effect. The company hopes that its big investments in production facilities, both organically and through buyouts, will pay off with strong market share that it can then use to enter global markets more aggressively.

The wild card in the cannabis industry is what's likely to happen if other major jurisdictions legalize marijuana. The assumption seems to be that Canadian companies like Aurora will have a head start and immediately capture international markets. But with plenty of small competitors, that might prove more difficult than investors hope.

In any event, Aurora Cannabis has the potential to rebound from its losses so far in 2018 if things go well in the cannabis industry. However, it will have to be more efficient in raising capital and finding ways to grow if it wants to give shareholders the maximum reward possible.