Activision Blizzard stock is down roughly 30% in November. Here's what investors need to know about its recent earnings call, key franchises, and upcoming projects.

Activision Blizzard (ATVI 0.35%) reported third-quarter earnings results after the market closed on Nov. 7, delivering a significant year-over-year sales dip, earnings that fell short of the market's expectations, and some less-than-thrilling engagement metrics. Sales for the quarter fell roughly 12% to land at $1.51 billion, adjusted earnings per share fell to $0.42 from $0.47 in the prior-year quarter, and the company's monthly active users (MAUs) once again declined.

The lackluster earnings report combined with controversy from one of its recently unveiled games helped send shares down roughly 20% in the week of trading that included its BlizzCon conference and the release of the third-quarter results. Read on for a deeper look at the company's third-quarter performance, some of the factors behind its stock's recent sell-offs, and what lies ahead. 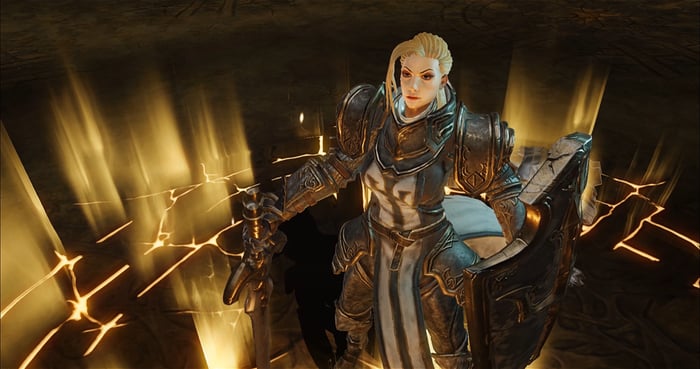 Some franchises are underperforming

Activision Blizzard's business outlook hinges on a couple of key factors -- how many players it has and how much revenue it's generating per player. While it's not necessarily a dire warning sign, there has been a downward trend on one of those fronts. The company's MAU count has declined recently, leading to weaker-than-anticipated performance from some of its key franchises.

The company recorded an average of 345 million monthly active users (MAUs) across its games in the third quarter, down from 384 million MAUs in the prior-year period and 352 million users in the second quarter of 2018. Daily play time per user did rise, however, to a record 52 minutes per day, up from 50 in the prior-year period.

MAUs for Candy Crush Saga increased year over year, and engagement for both Destiny 2 and World of Warcraft saw substantial boosts thanks to major expansion releases. But performance for Destiny 2 has been disappointing on the whole, and management indicated that sales of the game's recently released expansion were coming in short of expectations. Meanwhile, Hearthstone saw player declines, and Overwatch engagement was roughly flat.

Here's Coddy Johnson, Activision Blizzard's president and chief operating officer, touching on performance for Destiny 2, its recent expansion pack, and the company's decision to offer the PC version of the base game free for a limited time:

At BlizzCon we announced that Destiny, the base game is free for two weeks, meaning download it by November 18 and you get to keep the base game forever. We did that because we want the whole community loaded up and able to play it, but also because it's a live game and once you're in with the ongoing features and services and content, there's really deep engagement that takes place. And part of it was also because we have not yet seen the full core reengage in Destiny, which has kind of led to the underperformance against our expectations to date.

The video game industry is built around creating franchises, sustaining them for as long as possible, and then introducing new properties to start that cycle over again. Activision Blizzard's core stable of properties is still quite strong compared to those of its industry peers, but franchises like World of Warcraft are at the later stages of their respective life cycles, while others, like Destiny, are showing signs that they might not live up to their potential.

With Activision Blizzard's overall user base seeing declines and mobile representing the largest and fastest-growing gaming platform, devoting more resources to expanding its franchises on smartphones and tablets makes a lot of sense. The company acquired Candy Crush Saga developer King Digital Entertainment in 2015 for $5.9 billion in order to accelerate its push onto mobile, but it's also looking to bridge franchises from the Activision and Blizzard wings of the business onto mobile platforms.

Activision is developing a mobile take on its Call of Duty franchise in conjunction with Chinese gaming giant Tencent Holdings. Roughly a week before its third-quarter earnings release, the company also unveiled Diablo Immortal -- a mobile take on its famous PC-gaming franchise that was codeveloped with NetEase and was met with loud disapproval from its core fan base. Here's Johnson commenting on the game's reveal and its outlook:

While fan reaction was muted to the announcement, players' hands-on experience at BlizzCon confirm what we believe, which is that Diablo mobile will be a very well received game when it releases and players around the world will love it. These are just two of the many mobile initiatives under way across Activision and Blizzard. And King Mobile expertise is now being shared throughout the company, so our beloved PC and console franchises can expand their reach.

Given how intense the negative fan reception for Diablo Immortal was, Johnson's description of the reaction as "muted" is probably overly generous. However, there's still a good chance that the title will go on to be a hit for the company, and shareholders have a lot to look forward to if the company can successfully expand some of its big console and PC franchises to phones and tablets.

The company sees strong engagement for Call of Duty

Call of Duty: Black Ops 4, the latest annual installment in the long-running franchise, hit the market on Oct. 12, and management appears to be pleased with the title's performance. Johnson provided some color on the game's sales and on engagement compared to the last release in the Black Ops series:

So it's worth underscoring that given Black Ops 3 generated more in-game net bookings than any other Call of Duty titles, this level of engagement in Black Ops 4 should result in strong in-game revenue in Q4 and into 2019.

Call of Duty is still one of Activision Blizzard's most important properties, so each series release tends to have significant implications for the company's short- and longer-term performance. The fact that management sees the recently released game's performance comparing favorably to Black Ops 3 is a reassuring indicator and shows that the bedrock franchise still has strong pull.