Video-game publisher Activision Blizzard (NASDAQ:ATVI) has delivered fantastic stock returns over the last decade, but the market has recently taken a more cautious position on the company. Shares now trade down roughly 17% year to date. Part of that performance is related to the market's recent pullback, but there are also some important issues that the business has to address. 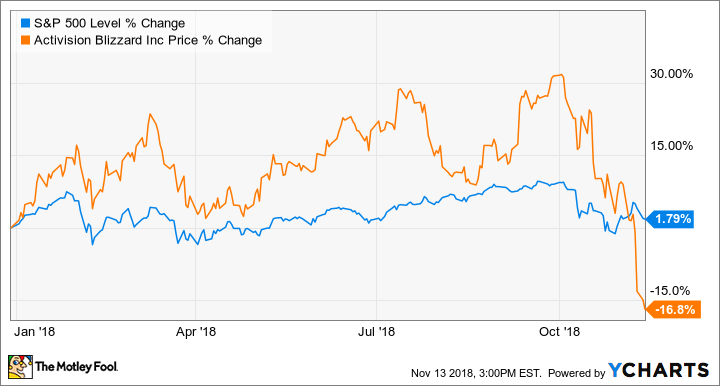 Activision Blizzard's recent third-quarter results weren't thrilling, with the company delivering year-over-year declines in sales and earnings and news that monthly active users (MAUs) across its titles had fallen once again. The mediocre performance arrived after the company unveiled a highly controversial mobile take on the Diablo franchise that was roundly rejected by fans of the series. The stock is down roughly 26% in November as of this writing.

The third quarter saw Activision Blizzard's revenue decline 12% year over year to $1.51 billion, and earnings per share fell from $0.47 to $0.42. Perhaps most worrying, the company's MAUs declined to 345 million, versus 385 million in the prior-year period and 352 million MAUs in this year's second quarter. The company's declining MAU base is an issue that must be addressed.

The gaming giant's monthly-active-user base has declined roughly 30% over the last two years. Much of that atrophy stems from King Digital's mobile games shedding players, but the migration of users actually hasn't had a big impact on overall performance because the core audience of Candy Crush Saga has continued to spend. However, there is evidence that some Activision and Blizzard franchises are losing momentum, and that puts pressure on developers to create new, successful properties in addition to substantial updates for existing games and breakthrough new releases in existing franchises.

While the third-quarter results were disappointing, investors should also keep in mind that Activision Blizzard's performance in a given period can face uneven comparisons depending on the company's release schedule. This tendency has been reduced somewhat by the video game industry's focus on driving in-game purchases (helping to smoothing out revenues between game releases), but it can still be a factor in skewed comparisons.

It's worth mentioning that the company released Destiny 2 in last year's September quarter, while its biggest releases in this year's third quarter were expansion packs for Destiny 2 and World of Warcraft. Expansions can still drive big sales, but these are franchises that appear to be waning -- World of Warcraft because the game is nearly 15 years old, and Destiny because it hasn't lived up to hype and fan expectations.

The backdrop of declining users and aging franchises does make the reception for the company's most recently unveiled game more concerning. Diablo Immortal debuted at the company's BlizzCon conference about a week before the publisher reported its third-quarter earnings, and to say that the game hasn't won fans over would be an understatement. The mobile game's reveal received a broadly negative response because hard-core series fans were expecting a PC game. Fans were also disappointed that the mobile title is being developed in conjunction with Chinese developer NetEase.

Whether or not the title goes on to be a success, Diablo Immortal will go down as having one of the most controversial game reveals ever. In that context, it's understandable that Immortal's flubbed debut caused shares to dip roughly 7% in the day of trading following the reveal. It's also not unreasonable to think that the response might have worsened the stock's post-earnings sell-offs. Investors are looking for new products that can expand the company's active user base, and the loudest feedback on its next potential growth engine is overwhelmingly negative. However, the negative response to the game's unveiling doesn't necessarily mean that the title won't be a success.

Activision Blizzard's growth is slowing as some of its core franchises are losing steam, and that highlights the possibility that efforts to reenergize existing games and launch new properties will fall short. However, the company still has a lineup of gaming franchises that compares very favorably against its industry competitors. It also has a talented collection of development studios and a commendable history of launching new properties, so there are good reasons to have confidence in the company's ability to navigate many of the issues at hand.

Devoting more energy and resources toward bringing some of its existing franchises to mobile could be controversial, but it's a move that has the potential to pay off in big ways. Mobile represents the world's largest and fastest-growing gaming platforms and offers the potential to accelerate growth in markets like China and India. As the reaction to Diablo Immortal demonstrates, it will be important that Activision Blizzard delivers high-quality products on mobile and continues to deliver fresh content for its console and PC-based gaming audiences. But concerns that the company is out of touch with its market appear to be misplaced.

The company's stock declines following the reveal of Diablo Immortal and the publishing of disappointing user-base declines highlight some key challenges ahead. However, Activision Blizzard still looks poised to benefit from the industry's ongoing shift to digital distribution, growth for in-game purchases, and expanding overall demand for gaming content. The company also looks uniquely well positioned to take advantage of growth opportunities like esports and augmented reality.