Shares of Shopify (NYSE:SHOP), the e-commerce platform company, have spiked 50% this year as investors continued to believe in the company's growth story and responded to most of the company's quarterly earnings reports positively.

Despite Shopify's shares taking a quick dip in October, investors have remained mainly optimistic about the company's moves and its ability to continue growing. 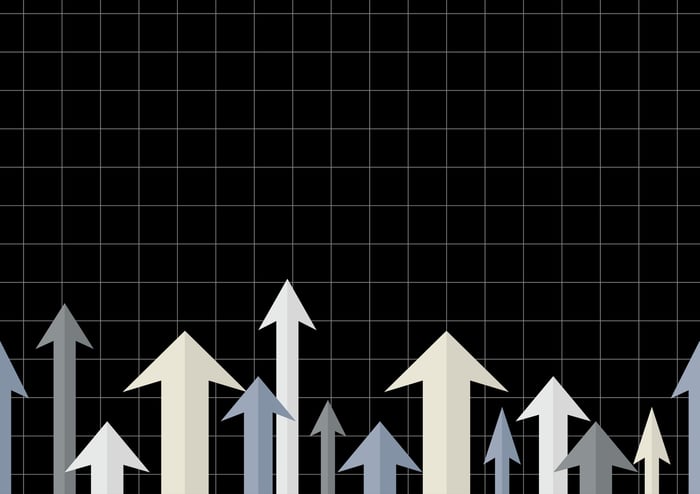 A little pessimism didn't stifle a lot of sales growth

Shopify started the year strong, with its share price spiking 27% in January. Investors were excited about strength in the broader online retail segment following strong sales in the holiday quarter.

The company's share price also experienced a bump after Apple CEO Tim Cook went to Shopify's headquarters in January and praised the company and its technology. Cook said he is "a big fan of Shopify" and added:

I love the fact that their focus is on democratizing technology for entrepreneurs that are largely artisans and bringing their products to market so that these merchants can focus on what they are great at.

Shopify's shares took a bit of a hit in March after Citron Research, which often takes a short position on stocks, published a report saying that Shopify's business could be hurt as Facebook scales back how much personal user information it shares with online retailers. Shopify's online retail platform can be integrated into many different social websites, and investors feared that Facebook's recent privacy woes would trickle down to Shopify's business. 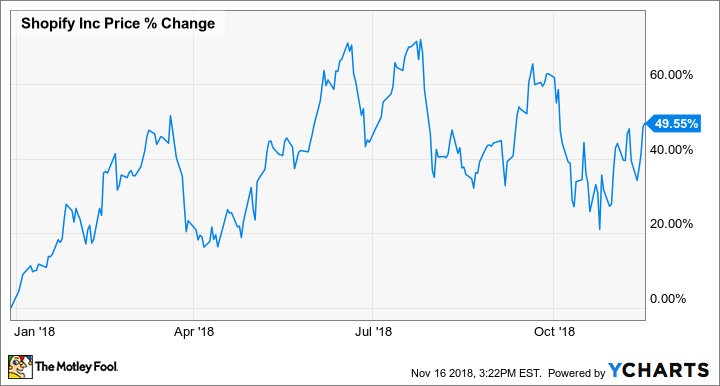 Those worries appeared to be overblown, though, and in May, the company reported its first-quarter results, with revenue growth of 68% compared to the year-ago quarter. And in the second quarter, Shopify's revenue climbed 62% year over year to $245 million. Those strong quarterly results helped push Shopify's stock up more than 60% from the beginning of the year.

Shopify reported solid third-quarter results at the end of October, which caused its share price to jump about 11% temporarily. Sales grew 57% to $270.1 million, and the company's important Merchant Solutions segment sales improved 68% to $149.5 million.

However, the company's shares suffered a 16% overall drop during the month as investors grew more concerned about rising interest rates and feared a trade war between the U.S. and China.

Fortunately for Shopify's investors, the company's strong gains throughout the year meant it weathered October's sell-off better than other tech stocks.

There's likely more where that came from

Despite the recent stock sell-off, there's little for Shopify shareholders to be worried about. Following the company's strong third-quarter results, management raised its full-year revenue guidance for the company to a range of $1.045 billion to $1.055 billion and expects fourth-quarter sales to jump 44% from the year-ago quarter.

Of course, there's no guarantee that Shopify's sales -- and shares -- will continue climbing, but the company has proven this year that it can weather negative reports from short-sellers, maintain share-price gains amid a broader market sell-off, and continue to consistently grow its revenue. With the recent share-price dip resulting from investors fears rather than problems with Shopify's business, now may be a great time to snatch up shares of this rising tech stock.