The PlayStation business is booming and helped push Sony stock to a 10-year high in 2018.

Sony (SONY -1.29%) stock is handily outperforming the broader market in 2018, with a series of mostly encouraging earnings reports helping the company post double-digit gains in a year that's otherwise seen volatility for technology stocks. The company's gaming, financial services, and music divisions have been the biggest sources of its strong performance year to date, but it's also seen improvements in other key segments. 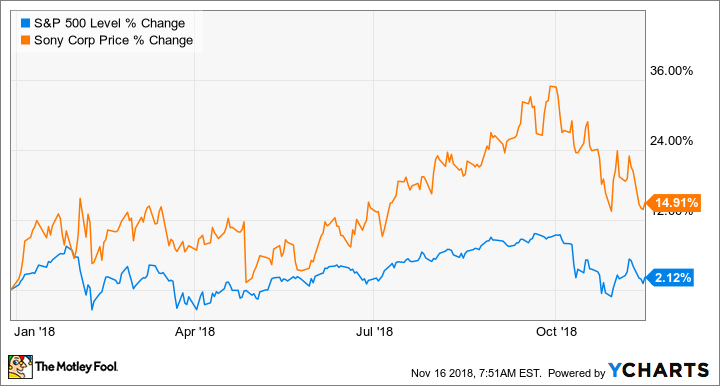 Sony's PlayStation 4 console, which just entered its sixth year on the market, has put up great hardware sales and created a product ecosystem that also generates strong software sales and recurring revenue from online-service subscriptions. While performance from the company's television and mobile businesses continues to be uninspiring, gaming and financial services are providing a strong foundation for the company. There's also a lot of potential in the imaging business, and the company's long-struggling movie division is showing some signs of a rebound. 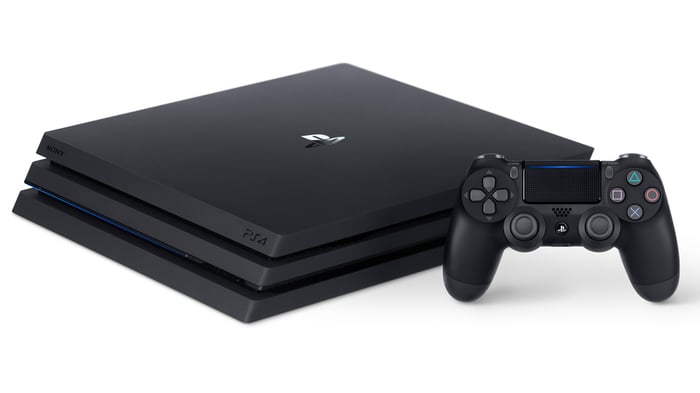 2018 has been a huge year for Sony's PlayStation business. Games like God of War and Spider-Man have proved to be huge hits this year, with the latter title setting a record for the company's fastest-selling internally developed game ever. That's quite a feat, considering the company has been making games for over two decades and there are more competing offerings on the market than ever before. These strong results helped Sony stock hit a decade-long high late in September. Shares sold off as a pullback hit the broader market in October and have lost some additional ground in November despite the company publishing impressive second-quarter results.

Sony posted second-quarter earnings on Oct. 30, delivering strong performance and raising its full-year guidance. The company's September quarter saw a 27% year-over-year sales increase and a 65% operating income increase for its games and network services segment. These helped push total revenue up 6% year over year and operating income up 17%. Sony is now guiding for sales from its gaming segment to be up 15% this year thanks largely to the performance of Spider-Man and God of War.

Sony's film division, an underperformer in recent years and an area of the business that still isn't living up to its potential, is also showing signs of resurgence. The movie segment posted a $209 million profit in the second quarter, up substantially from the $68 million profit it posted in last year's second quarter and the $68 million loss it posted in this year's first quarter.

The company's movie business then went on to score a hit with Venom in October, an offshoot of the Spider-Man franchise that's on track to record more than $700 million in ticket sales. Hotel Transylvania 3: Summer Vacation has also scared up an impressive $525 million at the box office this year. On the heels of last year's Jumanji: Welcome to the Jungle grossing nearly $1 billion in ticket sales and the successful reintroduction of the Spider-Man franchise, Sony's film wing is looking stronger than it has in years.

PlayStation 4 has been a huge hit for Sony, but it's at the point in its product lifecycle where the company is working on a replacement to bring to market in the not too distant future. Sony's gaming brand is strong, but investors should proceed with the understanding that the company could lose its dominant position in the gaming hardware space with the next generation of hardware.

In addition to competing with a new Xbox platform from Microsoft, there are also indications that Alphabet could launch a streaming-centric gaming platform in the not-too-distant future. Sony also has a strong collection of video game franchises and development studios, so it's not as though the company's gaming empire is at risk of collapsing overnight if its next platform doesn't match the success of PS4. However, much of the strong performance from its gaming division in recent years has come from online subscription services, licensing revenue from third-party publishers on the console, and other perks associated with owning a hardware platform.

Gaming has become the core of Sony's business, but it has growth opportunities elsewhere as well. The company is making a bigger bet on its music business in light of the stronger industry outlook created by growth for streaming services, and it recently closed a $2.3 billion deal to acquire an additional 60% stake in EMI Music Publishing to bring its total ownership position to 90%. The company also sees growing demand for its image sensors over the next few years, as more of its camera components are incorporated into smartphones. Longer term, Sony's expertise in imaging technology gives it a big opportunity to provide sensor components for smart cars and machine-vision-based robotics systems.

Overall outperformance across the business in its first two quarters and the recently closed EMI acquisition prompted the company to raise its full-year operating target to $7.7 billion, up 30% from the target that it issued in July.