In March of this year, Concho Resources (NYSE:CXO) sent shock waves through the oil patch by announcing a bold move to buy rival shale driller RSP Permian for $9.5 billion. While the driving force of the acquisition was that it bolstered Concho's position in the Permian Basin, the company also saw the deal as a road map for rivals to drive a much-needed consolidation wave in the sector. While the ripple effects of that deal have taken time to develop, a recent surge in merger activity in the industry suggests that it's finally taking hold.

The first ripple of a merger wave among U.S. shale drillers appeared in late August when Diamondback Energy (NASDAQ:FANG) agreed to buy fellow Permian Basin-focused producer Energen in a $9.2 billion deal. Diamondback largely followed the road map laid out by Concho by acquiring a company that would bolster its position in the Permian while also boosting its earnings and cash flow. 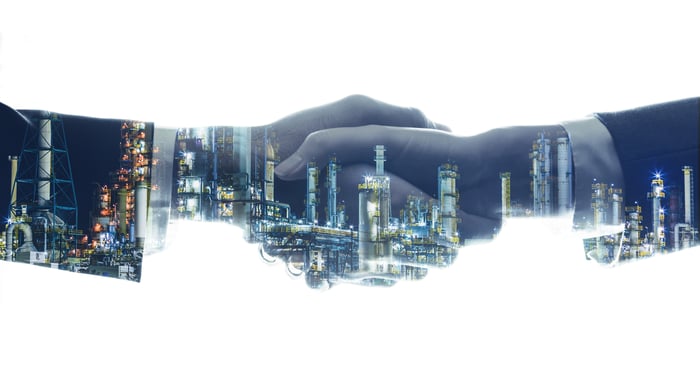 That ripple has grown into a much larger wave over the past few weeks as U.S.-focused oil producers have now announced four notable mergers. Denbury Resources (NYSE:DNR) started things off in the last week of October by agreeing to buy Eagle Ford shale-focused Penn Virginia Corporation for $1.6 billion. Chesapeake Energy (OTC:CHKA.Q) followed that up a day later by acquiring Eagle Ford-focused WildHorse Resource Development for $4 billion. Meanwhile, Encana (NYSE:OVV) began November off with a bang by agreeing to purchase Newfield Exploration for $5.5 billion. Finally, Cimarex Energy (NYSE:XEC) continued the buying spree this month by recently signing a deal to acquire Resolute Energy for $1.7 billion.

Drilling down into the recent transactions

The sector's four most recent deals have taken two divergent paths. One group of drillers has followed Concho Resources' road map for in-basin consolidation while the others are diversifying their asset base to accelerate their growth prospects.

Both Chesapeake Energy and Cimarex Energy are in that first group. In Chesapeake Energy's case, it's bolstering its position in the Eagle Ford shale by acquiring a company focused on that region. Because of that, Chesapeake believes its acquisition will not only enhance its growth prospects but reduce costs as it benefits from having increased scale in the area to operate more efficiently. Cimarex Energy sees the same things from its purchase of Resolute. In the company's view, the transaction will boost its earnings and cash flow in the near term, while also enhancing its growth prospects and reducing costs since most of Resolute's land is adjacent to Cimarex Energy's Permian position.

Meanwhile, both Denbury and Encana are taking a different route by diversifying so that they can add new growth engines to their portfolios. In Denbury's case, it's adding Penn Virginia's shale assets in the Eagle Ford to drive near-term growth that will help bridge the gap until its large-scale oil developments in the Rockies come online in a few years. Encana, on the other hand, is acquiring Newfield for its position in the STACK Shale of Oklahoma. That will add a third growth-focused shale play to Encana's portfolio that will complement its positions in the Permian Basin and Canada's Montney shale. Encana believes the deal will enhance its ability to achieve its five-year strategic plan, while also enabling it to generate significant excess cash that it plans on returning to investors.

Expect the wave to continue growing

With more than 50 publicly traded oil and gas producers in the U.S., the sector would benefit from continued consolidation since that would reduce both competition and costs. That's why it's likely that oil companies will announce more deals over the next year, especially as the recent string of transactions gives both buyers and sellers a more realistic picture of merger valuations. Investors should watch this trend closely since it could improve the sector's profitability in the long run, which could create more value for the sector's shareholders in the coming years.