The Mac maker is facing headwinds in emerging markets.

Apple (AAPL -1.96%) just can't get a break from souring investor sentiment. Evidence continues to mount that demand for the newest iPhones may be tepid, and investors remain intensely focused on unit sales even as the company keeps trying to get shareholders to appreciate the services business more. Apple said earlier this month that it will no longer disclose unit volumes.

The latest news rattling investors is Goldman Sachs cutting its estimates on the Mac maker. 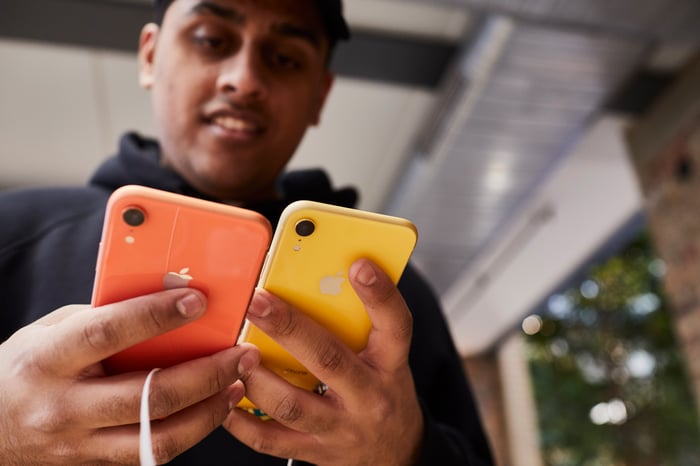 Third time's not the charm

Goldman analyst Rod Hall sent out a research note today reiterating the firm's "neutral" rating on Apple while reducing his price target from $209 down to $182. That's the third time this month that Hall has reduced his estimate on where Apple shares are heading over the next year. Hall had reduced his price target from $240 to $222 in the wake of fiscal fourth quarter results, only to drop his target to $209 a week ago.

"In addition to weakness in demand for Apple's products in China and other emerging markets it also looks like the balance of price and features in the iPhone XR may not have been well received by users outside of the U.S.," Hall wrote, pointing to recent supply chain reports that Apple has been cutting production orders. Hall expects Apple's fiscal first-quarter results to come in at the low end of Apple's guidance, which had already disappointed investors. The tech giant expects revenue in the December-ending quarter to be in the range of $89 billion to $93 billion. Apple has been facing headwinds in emerging markets, particularly those with currencies that have weakened against the U.S. dollar recently.

"The emerging markets that we are seeing pressure in are markets like Turkey, India, Brazil, Russia," CEO Tim Cook said on the earnings call earlier this month. "These are markets where currencies have weakened over the recent period; in some cases that resulted in us raising prices and those markets are not growing the way we would like to see."

While the iPhone XR looks like a strong product, offering many of the same features found in the iPhone XS and XS Max, the $750 price tag can still be steep for consumers in emerging markets. For example, in Brazil, one of the markets Cook mentioned specifically, the iPhone XR starts at 5,199 Brazilian real (which includes all applicable taxes), or nearly $1,400. Cook had conceded that Brazil "was down somewhat compared to the previous year."

Apple has been getting battered in recent weeks, with shares now around 25% below all-time highs set in October, translating into a decline in market cap of nearly $300 billion. It's true that iPhone unit volumes have plateaued, but Apple has been able to generate revenue growth with price increases. If Apple has indeed hit a limit with its pricing power -- as Hall believes it has -- then some pessimism could be warranted.