Please ensure Javascript is enabled for purposes of website accessibility
Log In Help Join The Motley Fool
Free Article Join Over 1 Million Premium Members And Get More In-Depth Stock Guidance and Research
By Keith Noonan – Nov 23, 2018 at 5:15AM

You might love the deals, but these three stats will make you look at Black Friday in a darker light.

Black Friday is the biggest shopping day of the year, famous for offering store-goers the chance to score big discounts on televisions, clothes, and other hot holiday items. After taking part in turkey, mashed potatoes, and other Thanksgiving fare, more than a third of Americans plan to head out to stores the next day in hopes of snagging wish-list products at bargain prices.

There's certainly a lot to like about discounts, deals, and even a friendly dose of the competition that has come to be associated with the year's biggest shopping holiday. However, there's also an undeniable dark side to the retail rush. Read on for a look at three stats that will shake your love of Black Friday. 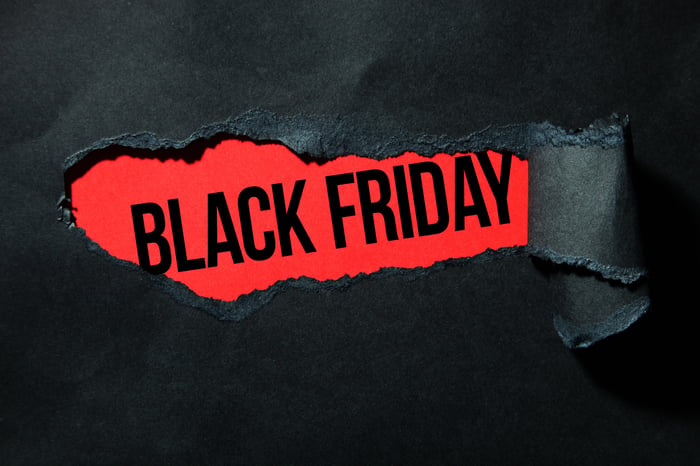 Deals to die for

While most of the attention and energy surrounding Black Friday still centers on the hunt for great deals, monitoring the instances of shopping-related violence and misbehavior that inevitably occur on retail's biggest day has become its own bizarre kind of spectator sport.

News stories about the latest Black Friday mishaps have become an annual tradition, and the spectacle of people rushing doors to be the first to enter a store or shoving other shoppers in order to snag limited merchandise is undeniably eye-catching. While the situations can be entertaining, comedic, and even farcical, thinking about the actual human costs tends to be more sobering.

A website called Black Friday Death Count tracks deaths and injuries related to Black Friday shopping and reports that 10 people have been killed and 111 people injured since 2006. Blaming these incidents on Black Friday itself doesn't make a whole lot of sense, but it's probably fair to say that the competitive nature that lends some of the fun and frenzy to the year's big shopping holiday also plays a role in creating situations that get out of hand.

At its best, the holiday season is about coming together with loved ones and celebrating the year and the prospect of those to come, so it's discouraging to think that serious injuries stemming from Black Friday shopping are nearly a statistical certainty.

With Black Friday offering in-demand products at deep discounts for a limited time, it's not surprising that some shoppers are tempted to take out loans in order to capitalize on a short window of pricing opportunity. However, the extent to which borrowing ramps up in order to fund holiday spending is more than a little bit concerning. A report from Symantec's ID Analytics business tracked a 30% increase in credit card and loan applications in November of last year compared to the previous month, with applications peaking on Black Friday.

There's not anything inherently wrong with buying holiday items on credit, so that stat alone might not be enough to sour anyone on Black Friday. However, that substantial increase in loan and credit card applications exists within a broader context that paints a concerning picture. U.S. household debt hit a record $13.5 trillion at the end of September. Most of that debt is in mortgages, but American credit card debt alone is above $1 trillion and at record levels, and LendingTree estimates that total consumer debt could reach $4 trillion by the end of the year.

Wanting to get gifts for loved ones or splurge on a holiday purchase is understandable, but the dramatic increases in loan and credit card applications that take place around Black Friday point to overconsumption and raise the question of whether people are spending within their means. Scoring a deal can be a great experience, but it's worrying to see people taking on debt that they won't be able to pay off for a long time just because they fear missing out on a great price.

While Black Friday is famous for its steep price cuts and big deals, some people are looking for bigger discounts -- those of the five-finger variety. Just as Black Friday is the biggest day of the year for retail, it's also the biggest day of the year for retail theft. Analysis by Travelers Insurance indicates that total theft incidents reported on Black Friday are about 2% higher than the average day. That might not sound like a lot, but a 2% increase is actually pretty significant, and the crime increase becomes more pronounced when looking at the trend in a more retail-specific context.

Insurance company Travelers reports that thefts that happen not at homes increase a whopping 28% on Black Friday compared to the average day across a seven-year study period. The theft increases are even more dramatic if you narrow the scope further and look at hot retail items like clothing and video games, with theft of the former rising 40% higher than average and theft of the latter up 42% more than average on Black Friday.

Much of this discouraging behavior is probably down to increased opportunity -- bags of gifts left in cars attracting wandering eyes or thieves taking advantage of the fact that stores are swamped with customers and having difficulty keeping an eye on everything that's happening.

Still, it's also possible that the competitive spirit that's come to be associated with Black Friday plays a role in the associated crime boom. With retailers dropping prices to get customers into stores, you might think that there would be less incentive to steal. However, based on the numbers, the season of giving for some is apparently also the season of taking from others.