Please ensure Javascript is enabled for purposes of website accessibility
Log In Help Join The Motley Fool
Free Article Join Over 1 Million Premium Members And Get More In-Depth Stock Guidance and Research
By Keith Speights – Nov 25, 2018 at 9:00AM

Several factors make this marijuana stock riskier than its peers.

It's no secret that investing in marijuana stocks comes with significant levels of risk. That's especially true for penny stocks linked to the cannabis industry. However, even the stocks of large marijuana companies with rapidly increasing sales and seemingly bright prospects can be riskier than that you might think.

One big marijuana stock, in particular, appears to be more precariously positioned than any of its peers. Investing in this stock should be viewed as especially risky. What's the most dangerous big marijuana stock on the market? Tilray (TLRY). 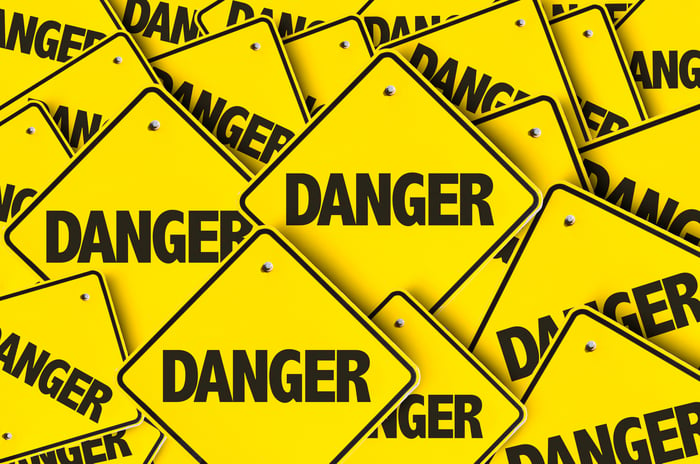 In Tilray's case, the IPO lockup period was set at 180 days. The company conducted its IPO on the Nasdaq stock exchange on July 19, 2018. Therefore, Tilray insiders will be able to sell shares on Jan. 15, 2019.

IPO lockup periods were intended in part to prevent insiders from selling large blocks of shares soon after a company goes public. Such major selling would flood the market and likely cause the stock price to crash. However, the IPO lockup period only pushes back the time when insiders can sell. If they dump shares at the end of the period, the stock will still fall.

There are a couple of reasons why the expiration of Tilray's IPO lockup period could be especially problematic. First, the marijuana stock has skyrocketed more than 350% since it began trading publicly. This gives insiders a strong incentive to sell to lock in substantial profits.

The other big issue for Tilray is the sheer volume of shares that are locked up. While Tilray has 76.5 million shares outstanding, the stock float -- the number of shares actually available for trading -- is only a little over 10 million shares. Even if insiders sell a relatively small portion of their holdings, it could cause Tilray to tank.

Roughly 78% of outstanding shares are owned by private equity firm Privateer Holdings. Tilray CEO Brendan Kennedy is the executive chairman of Privateer. Kennedy also personally owns another 2% of Tilray stock. Other Tilray executives own 2% as well.

Perhaps the best hope for outside Tilray shareholders is that these insiders resist the temptation to take profits. It's possible that could happen. If not, though, Tilray stock could be a ticking time bomb.

A side effect of Tilray's low stock float is that it has helped create an environment where the stock trades at an unsustainable valuation. The laws of supply and demand dictate that price goes up with low supply and high demand. But the supply of Tilray shares available for trading is artificially low. As a result, that makes the share price artificially high.

If you doubt that Tilray's valuation is higher than it should be, just look at how it stacks up against its peers. Aurora Cannabis (ACB -3.12%), for example, is on track to have an annual production capacity of more than 500,000 kilograms -- and that doesn't include the impact of the company's acquisition of ICC Labs. By comparison, Tilray's 912,000 square feet of growth space expected by the end of the year translates to an annual production capacity of more than 100,000 kilograms -- impressive, but only a fraction of Aurora's.

Aurora reported revenue in its last quarter that was more than double that reported by Tilray. Aurora posted much higher international sales than Tilray did. It had a much larger cash position than Tilray did at the end of the most recent quarter. Despite all of these advantages over Tilray, Aurora has a market cap that's nearly 40% lower than Tilray's market cap.

Could it just be that Aurora Cannabis is underpriced? Um, no. The stock trades at more than 100 times sales. The issue is that Tilray is way overpriced, especially considering its lower production capacity than many of its peers, including Aurora.

Even though Tilray's IPO lockup period expiration could zap its share price and the stock is trading at a premium to peers, several analysts still rate it as a buy. The consensus one-year price target for Tilray reflects a 35% increase from the current share price.

Based on this, you might think that the dangers for Tilray aren't all that great. Don't bet on it. The short-term risks are every bit as serious as they seem to be.

But the long term could be a different story. The global cannabis market could easily top $100 billion within the next 15 years if more major countries, particularly the U.S., legalize marijuana. Tilray should be in position to be a key player in this market.

The dangers for Tilray are real. But so are the future opportunities.