Please ensure Javascript is enabled for purposes of website accessibility
Log In Help Join The Motley Fool
Free Article Join Over 1 Million Premium Members And Get More In-Depth Stock Guidance and Research
By Matthew Cochrane - Updated Nov 26, 2018 at 8:16AM

The combination of these two industry giants created a payments powerhouse.

Vantiv Inc finalized its acquisition of London-based Worldpay Group for about $10 billion in the beginning of this calendar year. The newly formed Worldpay Inc (WP) recently reported its third-quarter earnings, giving investors a chance to check in on the company and the progress it's making.

Year-over-year comparisons for the company still are awkward, given that the current numbers technically still match up against Vantiv's pre-merger legacy business. To help, Worldpay also gives the numbers on a pro forma basis, which is how the results would compare if the two companies had been one entity last year. On this pro forma basis, Worldpay's numbers continue to shine. In Q3, the company's revenue rose to $1.02 billion, a 9% increase year over year, and adjusted earnings per share (EPS) grew to $1.05, a 17% increase year over year.

The combined company is now the world's largest payment-processing company by number of transactions, facilitating approximately 23 billion transactions worth about $1.6 trillion in payment volume each year. Its client base includes 11 of the top 25 retailers in the country by revenue. The merger is supposed to give the company a geographic reach and scale unmatched in the payments industry, as well as help it realize significant cost and revenue synergies. Let's take a closer look to see how those aspirations are progressing and driving the company's strong results. 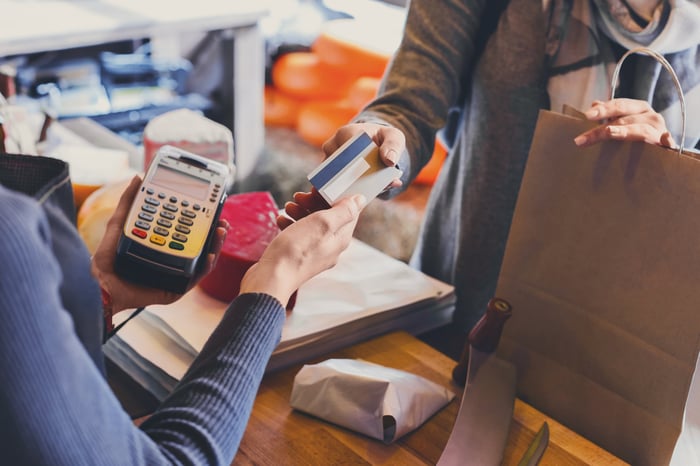 Worldpay's geographic reach is undeniably impressive. While competitive upstarts in the payments industry, such as Square Inc, are just now beginning to branch outside of their domestic countries of origin, Worldpay can confidently tell clients it can reach virtually the entire population of the world. In the company's third-quarter conference call, transcribed by S&P Global Market Intelligence, CEO Charles Drucker talked about how vast the company's worldwide scale is and the advantages it gives Worldpay when competing for merchant clients:

[T]hrough a global reach, we can help our clients access 99% of the world's GDP [gross domestic product]. We have the leading position in the U.S. and Europe and a differentiated on-the-ground presence across the rest of the world. Our proven global leaderships gives us an advantage over the patchwork of domestic acquirers and gateways that process in selected regions and countries around the world.

This scale helped Worldpay win key new deals with clients such as Nestle, which signed a multiyear new deal to strengthen the food conglomerate's "global e-commerce capabilities" and "to offer a trusted and secured shopping experience for their clients." Another "leading technology company" turned to Worldpay to enter the Brazilian market, where it was struggling due to the country's unique blend of headaches ranging from foreign-exchange issues to delayed settlements.

The sum is worth more than the parts

Another touted benefit of the new Worldpay is that it would be able to recognize several synergies that were simply impossible to realize as separate entities. On this front, the company continues to execute well.

Worldpay recognized $14 million in cost synergies in Q3, money that the company is able to save as a single entity. Management stated it was well on its way to recognizing $50 million in cost savings this year, and that figure should reach as high as $200 million in annualized savings by the end of 2020. In fact, CFO Stephanie Ferris hinted that the $200 million figure could even be revised higher if the integration continues to go well:

So we're really pleased with the cost synergies ... and feel really good about our $200 million by 2020. The ... bulk of the heavy lifting around the synergies relates to the U.S. platform. So moving the merchants from a heritage Worldpay U.S. platform to the heritage Vantiv platform here in the U.S. ... they started that work here in the third quarter. But the lion's share of it will complete by June of next year ... [A]fter that, that we would be able to potentially revisit our expectations around the $200 million because we want to make sure that we successfully execute on that and can see those synergies coming through.

Revenue synergies come from the combined company's ability to cross-sell its legacy capabilities to the other legacy's customers. For instance, the new company is able to sell the legacy Worldpay's global footprint to Vantiv's legacy customers and sell the legacy Worldpay's customers on Vantiv's breadth of services in the U.S. This type of cross-selling led to 15 new deals this quarter, almost all of which Drucker attributed to the merger.

Ultimately, Worldpay is guiding for $100 million in revenue synergies by 2020. For those keeping score at home, that's a combined $300 million in synergies that the company believes it can realize going into 2021.

Will Worldpay pay off?

Based on the company's full-year 2018 EPS guidance of $3.95 to $4.00, the company currently trades at a price-to-earnings (P/E) ratio of about 20.5. The fact that it's down about 20% from its all-time highs last month makes it seem even more attractive.

Indeed, the company's top-line growth in the high single digits, EPS growth in the mid-teens, competitive advantage based on its global scale, and synergistic tailwinds all combine to create a nice entry point for potential shareholders. Investors might want to consider giving Worldpay a closer look for their own portfolios.

3 Reasons Worldpay Is a Buy

Worldpay's Sum Is Greater Than Its Parts