More people are playing games, and that's been good news for these leading makers of gaming accessories.

The video-game industry has experienced tremendous growth in recent years thanks to the rise of esports and new players entering the market. Top game makers such as Activision Blizzard (NASDAQ: ATVI) have benefited from an industry that's estimated to be worth $138 billion and is growing 11% per year, according to industry researcher Newzoo. The industry is expected to attract millions of new players over the next three years, which spells opportunity not only for game companies and graphics card suppliers such as NVIDIA and Advanced Micro Devices, but also for makers of gaming accessories.

Logitech International (LOGI -2.45%) and Turtle Beach (HEAR -7.62%) are two of the leading makers of gaming essentials, such as mice, keyboards, and headsets, and they have experienced soaring demand this year, as "battle royale" games such as Fortnite have attracted millions of new players to the video game industry.

Here's what you need to know about Logitech and Turtle Beach. 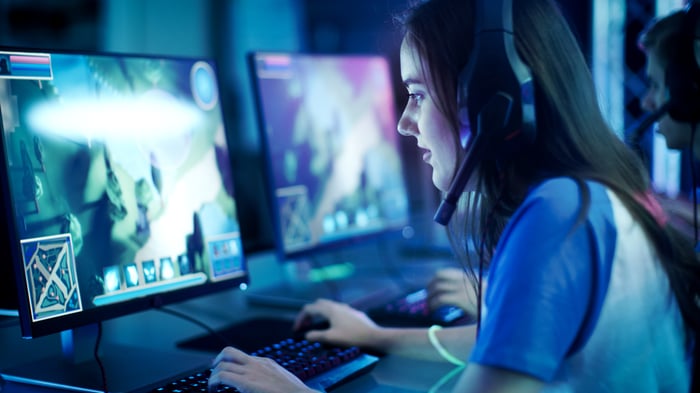 Essentials for every gamer

For years, Logitech has been one of the top brands for selling various computer essentials. The company makes products spanning video-conferencing equipment, webcams, general use keyboards and mice, audio speakers, and pointing devices. But the company's largest and fastest-growing category has been gaming.

Under CEO Bracken Darrell, Logitech has set out to be the Nike of esports. It's a fitting description, considering a gamer who purchases Logitech's G Pro wireless gaming mouse for $150 is no different from a marathon runner who buys a pair of Nike Zoom running shoes for about the same price. The right shoes mean everything to a runner, and it's no different for gaming enthusiasts. Logitech is designing high-end mice and keyboards that sell for premium prices but are must-haves for players who want to be at their best competing with other players in online gameplay.

Strong sales of these premium gaming products have led to impressive results lately. In the most recent quarter, the company delivered revenue growth of 9% year over year, while non-GAAP earnings per share grew 26%. Gaming accessories made up only 23% of total revenue, but robust growth of 41% in the segment was enough to power most of Logitech's incremental revenue growth in the quarter.

Turtle Beach has the No. 1 market share position for gaming headsets, which is most of its business. It makes quality headsets for every price point, from about $60 to the premium end at $250. Turtle Beach has become a major gaming brand, thanks to partnerships with top esports organizations, including its sponsorship of the Houston Outlaws in Activision's Overwatch League.

Shares of the headset maker have shot to the stratosphere, up 700% year to date. The company has grown revenue 154% year over year through the first three quarters of 2018. Analysts expect the company to report $270 million in revenue for the full year, representing 81% growth over 2017.

The bottom line has significantly improved over the last year, with 2018 earnings expected to reach $2.59 per share, compared with a loss of $0.28 in 2017. However, analysts expect earnings to fall next year to $1.65, along with lower revenue of $245 million. This highlights a key concern about the company's ability to generate recurring sales over time. 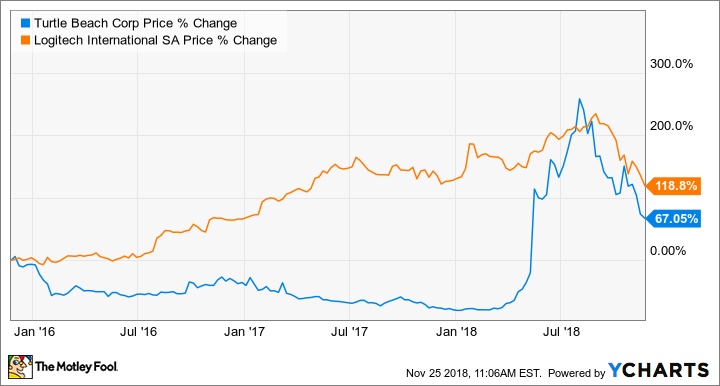 While Logitech is diversified across several categories, which lowers its risk profile for investors, Turtle Beach is a small company that's very dependent on growing sales of headsets. How often does a gamer need to upgrade headsets?

As it turns out, more often than you might think. Based on Turtle Beach's own internal research, console gamers upgrade or replace their headset once every 23 months on average. Among the Fortnite player base, Turtle Beach's own survey found that about 30% of first-time headset buyers plan to replace or upgrade within 12 months.

Looking at the big picture, management is planning to use the company's recent spurt in profitability to reinvest in new product categories such as mice and keyboards. Although there is competition with Logitech and others in these categories, Turtle Beach could have success with these products, given its existing relationships with esports organizations and game streaming personalities to spread its brand awareness.

Still, I would be very cautious with Turtle Beach. There are a lot of gamers who buy a quality headset and never feel the need to upgrade. A sudden slowdown in either the upgrade cycle or new players entering the market could dramatically change the company's fortunes.

Also, while Logitech is well diversified and has a market capitalization of $5.3 billion, Turtle Beach is a small-cap stock with a market cap of only $206 million. Small-cap stocks can be quite volatile, especially around quarterly earnings announcements, so keep that in mind.

All that said, if you already own shares of any of the top game makers, such as Activision Blizzard, Electronic Arts (NASDAQ: EA), or Take-Two Interactive (NASDAQ: TTWO), and you're looking for additional ways to invest in the growing video game industry, Logitech and Turtle Beach are worth a look.