Did the social media company mislead investors about threats to its business model prior to its IPO?

What did Snap (SNAP -13.19%) know and when did it know it? The vanishing-message social app company is now the focus of separate investigations by the Securities and Exchange Commission and the Justice Department, each apparently looking into whether Snap misled investors about how popular its service was, failed to disclose a shareholder lawsuit filed before its IPO last year, and failed to appropriately warn investors just how much competition from Facebook's (META 0.08%) Instagram was hurting its business.

The company had already been reeling from persistent performance shortfalls, and disclosure of the probes in mid-November sent its stock careening lower. 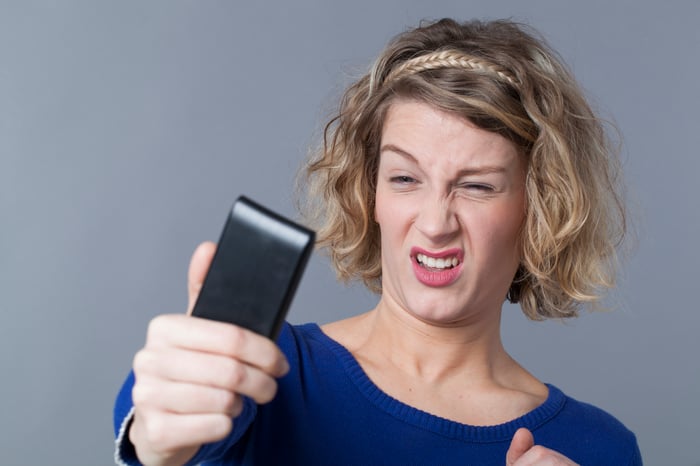 Snapchat's user growth rate has been on a steady downward slope since the company's March 2017 IPO. While no one expected Snap to continue posting the triple-digit percentage gains it achieved in its early years, the direction user growth was heading suggested that it was on course to shift from growth to contraction.

That contraction is already apparent on a sequential quarterly basis. Snapchat's daily active users (DAUs) peaked at 191 million in the first quarter of 2018; Snap CEO Evan Spiegel pins the blame for DAU declines since then on the disastrous app redesign he shepherded into existence. However, to a large degree, Snap's problems also stem from the fact that Instagram constantly duplicates Snapchat's best features, like Stories, and then improves on them. And Instagram's user growth continues to expand. 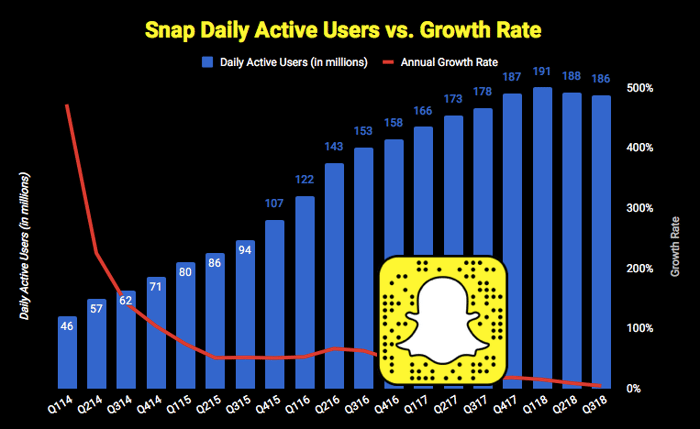 Now Snap did warn investors in its prospectus that Instagram could be a thorn in its side. In its "S-1" registration statement filed with the SEC, Snap said: "We face significant competition in almost every aspect of our business both domestically and internationally...For example, Instagram, a subsidiary of Facebook, recently introduced a 'stories' feature that largely mimics our Stories feature and may be directly competitive."

While that seems to contradict the lawsuit's allegation that Snap failed to warn investors that it was aware Instagram could be a problem, it may be that, as it prepared for its IPO, company management tried to minimize the magnitude of the impact Instagram was actually having on Snapchat. According to the lawsuit filed against Snap, the company was actively inflating its user data in marketing materials before it went public.

Masking trouble from within

Former Snap executive Anthony Pompliano alleges that after he was hired in 2015, he found and reported that Snap was exaggerating to advertisers the number of DAUs on its platform, telling them it had more than 100 million when in fact it was at most 97 million. Moreover, the company claimed Snapchat was growing its DAUs at double-digit percentage rates when in fact, they were flat or rising by only low single-digit percentages.

Pompliano filed a whistleblower lawsuit against Snap in January 2017, months before the company went public, yet Snap never mentioned the suit publicly until it was unsealed last summer. Similarly, Snap only acknowledged the existence of the SEC and Justice Department probes after the government made a sealed filing in the lawsuit, which Reuters exclusively reported last week.

Snap claims the lawsuit is "meritless," and has previously asserted the claims in it came from a "disgruntled former employee," but the government probes are a problem, especially as the Justice Department is involved, which opens the possibility that criminal charges could be filed. The SEC does not have prosecutorial power. However, it's also worth remembering that an investigation is far from a conviction, and there's no knowing yet whether any charges will be filed in either probe.

Problems of its own making

Snap says it doesn't have full insight into the investigations, but it believes they revolve around its IPO disclosures. Investors, though, should have been well aware that Instagram's strengths were a threat to Snapchat's viability: For years, that theme has been highlighted repeatedly in the media as a reason to stay away from Snap's stock.

Ultimately, it may be that the low regard in which investors hold Snap is traceable more to its flawed app redesign, its stumbling response to its users' revolt, and its lack of clear vision, than to any governmental investigations into the company and its IPO.