Please ensure Javascript is enabled for purposes of website accessibility
Log In Help Join The Motley Fool
Free Article Join Over 1 Million Premium Members And Get More In-Depth Stock Guidance and Research
By Travis Hoium – Nov 26, 2018 at 11:35AM

These aren't good days for the gaming industry.

2018 has been a rough year for gaming suppliers like Scientific Games Corporation (LNW 4.55%) and International Game Technology (IGT 3.96%), which make everything from slot machines to lottery tickets. As you can see below, their stocks have plunged throughout the year, and recently released third-quarter results didn't help.

Gaming suppliers are running into the same macro problems that casinos are seeing, like slowing growth and an over-saturated market, but there are also some unique challenges these two companies face that could be hard to recover from anytime soon. 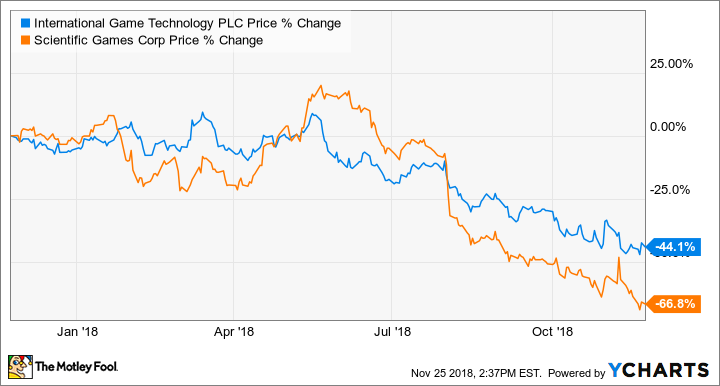 Third quarter results highlighted what's going on with operations lately for IGT and Scientific Games. IGT's revenue was down 5% to $1.16 billion, and operating income fell slightly to $257 million, with net income of just $22.3 million. Scientific Games' revenue was up 7% to $821.0 million on the acquisition of NYX, but if you pull that deal out revenue would have been up only slightly from a year ago. Net loss surged from $59.3 million a year ago to $351.6 million last quarter.

Slow growth doesn't necessarily have to be bad for a company, but investors came into 2018 expecting a lot more growth from the gaming industry. And their debt loads may mean they have to have strong growth just to survive. 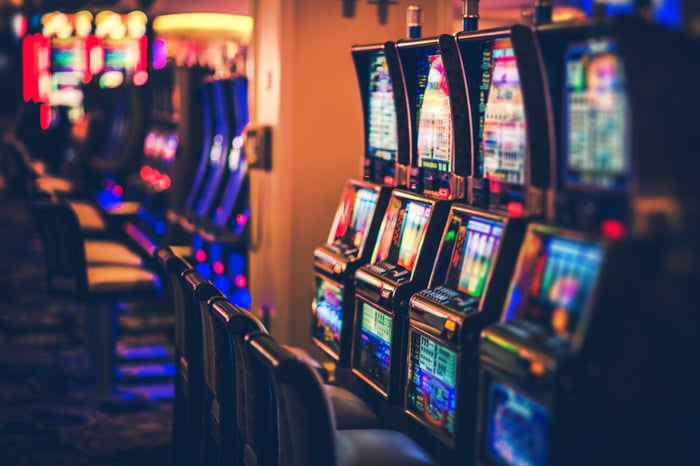 Valuations were too high

At their peaks, both IGT and Scientific Games had market caps over $5 billion, and you can see that each has amassed a debt load of over $8 billion over the past decade -- meaning as enterprises they were worth over $13 billion. Those are high valuations for companies struggling to make money, and set a high bar for growth on the top and bottom line. 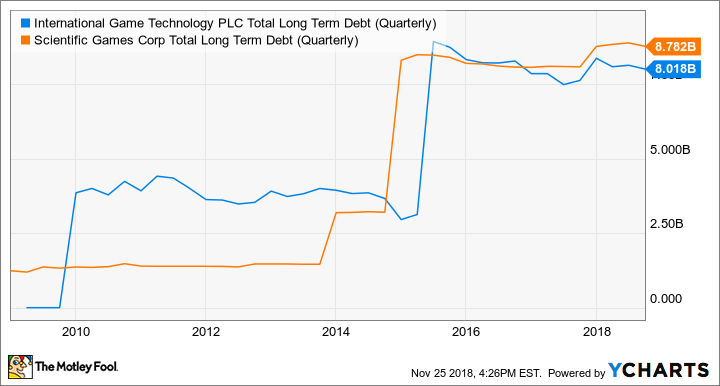 The concern long-term is that high levels of debt will lead to financial difficulty long-term. If revenue begins to shrink, it could make it more difficult to service debt, and that's when companies face the prospect of having to sell shares that dilute current shareholders -- or in the worst cases even face bankruptcy. Conditions would have to get a lot worse for either company to be that bad off, but high stock valuations and high debt loads put companies in the high-risk category, and that can lead to violent stock reactions.

If you're watching companies like IGT and Scientific games as a way to play sports betting in the U.S., you can see that the market isn't yet mature enough to drive significant revenue. The American Gaming Association estimates that sports betting is $150 billion each year in the U.S., but only a small fraction of those bets are made legally in casinos.

Someday, mobile sports betting may be a significant business for U.S. casinos and could contribute to IGT and Scientific Games' growth, but we're not there yet. And no one knows how long it will take to legalize sports betting in most states.

No easy answers in gaming

On a macro level, there are signs gaming is slowing in Macau and may have plateaued in the U.S., which would be bad for gaming suppliers that rely on the end customers growth to drive their business. If the end customer is slowing spending, it's bad news for suppliers -- and huge debt loads may make these two stocks too risky right now.