The e-commerce giant has set its sights on audiobooks, a fast-growing digital content space.

E-commerce giant Amazon (AMZN -1.59%) is well-known for its interests in a variety of emerging tech trends, from drones to smart homes. That's all very cutting-edge, but the company is also taking a fresh look at its roots in books. Amazon was founded as an online bookstore in 1995, setting the stage to push traditional bookstores off the map and it has been taking steps to disrupt that market yet again.

Such a move might seem counterintuitive, given that book sales have nearly stagnated. Print-book sales were up just 1.9% in 2017. For comparison, the market grew at a faster pace in 2016 when print-book sales increased 3.3%. But Amazon is looking to make a dent in a niche that's still growing -- audiobooks -- and this looks like a smart move.

The plan to disrupt the audiobook market is already in motion. Amazon recently announced its entry into the market in India, and success there could act as a blueprint for the company's global growth in this space. 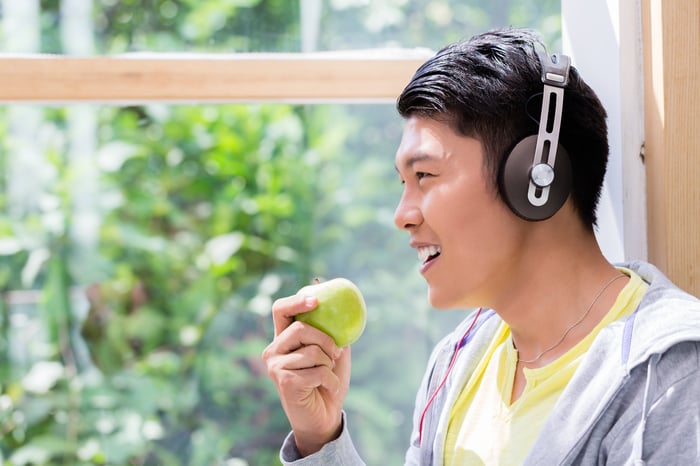 The company's audiobook service, called Audible, is now offering consumers in India access to nearly 200,000 titles across different languages and genres. The company is offering the first month free. Amazon Prime customers in India will have 90 days of free access to Audible.

After the free trials, users will have to pay a monthly fee of just over $4 to continue access. There are semiannual and annual packages as well that'll cost roughly $18.50 and $32, respectively. So Amazon has kept prices of Audible low in India as of now, since the service is currently in the beta phase. Monthly Audible plans in the U.S. range from $4.95 to $22.95.

But don't be surprised if Amazon manages to score a ton of Indian users who sign up for free Audible and eventually end up paying for it for two reasons: low pricing and Amazon's growing clout in the electronic devices space thanks to its Alexa-enabled speakers.

It is easy to understand how low prices will help Amazon win over customers in India, as they will be able to choose from a variety of books at a fixed subscription fee. Smart speakers are expected to play a bigger role in boosting Amazon's audiobook empire.

Let a smart speaker read to you

Users have started using voice-enabled wireless speakers to consume audiobook content, which isn't surprising as smart speakers can act as a virtual library of audiobooks. The ease of directing the smart speaker to play the audiobook of choice is probably encouraging users to listen to titles on smart speakers.

According to a survey of U.S. audiobook listeners in April last year, 19% of the respondents said they were listening to audiobooks on smart speakers. Smartphones were the most popular device with 57% using this platform to consume audiobook content, followed by personal computers at 52% and tablets at 50%. A third of the respondents used CD players to listen to audiobooks.

The important point here is that sales of smartphones, PCs, and tablets have stagnated, but smart speakers are in their ascendancy, so they have the potential to drive sales of audiobooks. This is where Amazon has an advantage as it is leading the charge in smart speakers.

The company set its sights on the audiobook market a decade ago, when it acquired Audible for $300 million. That move has proved smart. Audiobooks have turned out to be the fastest-growing vertical within the digital publishing space, clocking $2.5 billion in sales in the U.S. last year. That is a jump of nearly 20% over the 2016 sales number. Amazon includes audiobook revenue in its subscription services line item, so it's not clear how much Audible is bringing in on its own.

The Audio Publishers Association estimates that just over a quarter of the U.S. population listened to an audiobook in 2017. It won't be surprising to see audiobook sales growing at an impressive rate as nearly half of the population that listens to them falls in the age range of 18 to 44 years, prime buying years.

In all, it can be said that Amazon is sitting on a nice mix of catalysts in the audiobook space: fast-growing smart-speaker sales, its leadership position in this device category, and a favorable consumer demographic. The last point is of great importance as a tech-savvy generation of customers prefers audiobooks and they are probably the driving force behind the adoption of new technology such as smart speakers.

Once these consumers get hooked on the combination of smart speakers and audiobooks, it would be a win-win situation for Amazon. The good part is that the company is already looking for a bigger slice of this pie by offering consumers a taste of its Audible subscription for very low costs in key markets such as India.