Please ensure Javascript is enabled for purposes of website accessibility
Log In Help Join The Motley Fool
Free Article Join Over 1 Million Premium Members And Get More In-Depth Stock Guidance and Research
By Adam Levine-Weinberg – Nov 27, 2018 at 10:21AM

Spirit Airlines (SAVE 0.25%) has been one of the few airline stocks to move higher during 2018. Nearly all airlines have faced margin pressure this year due to a rebound in oil prices -- and, to some extent, rising labor costs -- but Spirit has done a good job of reducing its nonfuel unit costs and returned to strong unit revenue growth last quarter.

Nevertheless, Spirit's initial outlook for the fourth quarter implied that its pretax margin would continue declining. But on Monday afternoon, the carrier dramatically increased its forecast for revenue per available seat mile (RASM). As a result, Spirit Airlines stock soared 20% as of 9:45 a.m. Tuesday morning, surpassing $60. 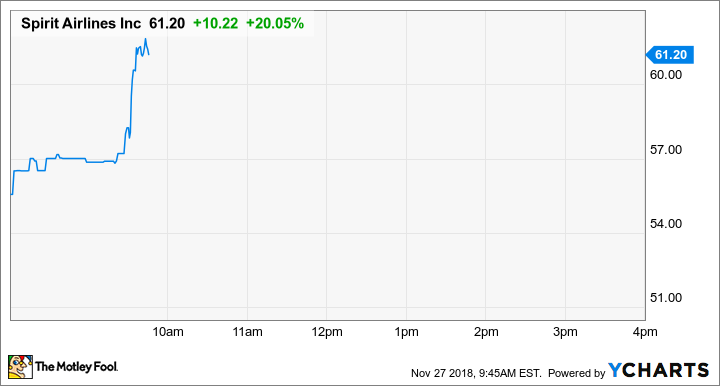 During the third quarter, Spirit's RASM rose 5.5%. A month ago, it projected that unit revenue growth would accelerate slightly to 6% in the fourth quarter.

Meanwhile, Spirit Airlines and its peers are finally getting some relief from a long surge in fuel prices. The price of Gulf Coast jet fuel, which bottomed out at barely more than $0.80 per gallon in early 2016 but surged to a multiyear high of nearly $2.35 per gallon in early October, fell back below $2.00 per gallon in mid-November.

As a result, Spirit lowered its Q4 fuel cost guidance to $2.27 per gallon (including taxes and transportation costs) from an initial forecast of $2.46 per gallon. The carrier also reduced the high end of its nonfuel unit cost guidance range by 0.5 percentage points.

Earnings growth is set to explode

Spirit Airlines' previous outlook for the fourth quarter implied that its pretax margin would fall to around 8% from 12% last year. Even with the benefit of a lower tax rate (due to federal tax reform) and strong revenue growth, this put Spirit on pace to post adjusted earnings per share roughly in line with the Q4 2017 figure of $0.73. This week's investor update implies an immediate return to margin expansion. Spirit Airlines' pretax margin is now on track to surpass 14% in the fourth quarter. Furthermore, the carrier's guidance implies that revenue will surge nearly 28% to around $852 million: roughly $40 million ahead of the average analyst estimate.

The net result is that Spirit Airlines is likely to post EPS between $1.30 and $1.40 this quarter. That's nearly double what its original guidance had implied -- and what analysts had expected.

Spirit Airlines stock could just be getting started

The remarkable thing about Spirit Airlines' projected return to margin expansion is that the carrier still expects fuel costs to be up 15% year over year and nonfuel unit costs to rise at least 5% this quarter.

By contrast, management expects nonfuel unit costs to rise no more than 1% in 2019. And as things currently stand, Spirit's average jet fuel price is on track to decline next year. Thus, even with flat unit revenue, Spirit Airlines could expand its profit margin again in 2019.

Fortunately, RASM should continue growing at a healthy clip next year. Spirit will face easy comparisons in the first half of the year, as RASM fell 4.6% in the first half of 2018. Its route network optimization and ancillary revenue initiatives should also boost unit revenue.

Spirit Airlines may have been "overearning" in 2015 and 2016, when its adjusted pretax margin came in at 23.4% and 19.8%, respectively. But its pretax margin was artificially depressed this year -- it will end the year a little below 12% -- due to the surge in fuel prices over the course of 2018.

If Spirit's pretax margin rebounds to 15% next year, EPS might reach $6.50. (Prior to this week's investor update, the analyst consensus was just $4.59.) If pretax margin were to surge to 18%, which might only require mid-single-digit RASM growth, it could boost EPS to nearly $8. Thus, Spirit Airlines stock has a good chance to continue rallying -- and could even surpass its December 2014 all-time high of roughly $85 at some point in 2019.