While there was no Star Bulk-specific news to explain the shares' rise, it's still not difficult to figure out the story behind this one: Star Bulk Carriers carries bulk goods, the price of carriage of which is tied to the Baltic Dry Index (BDI) -- and right now, the BDI is on fire. 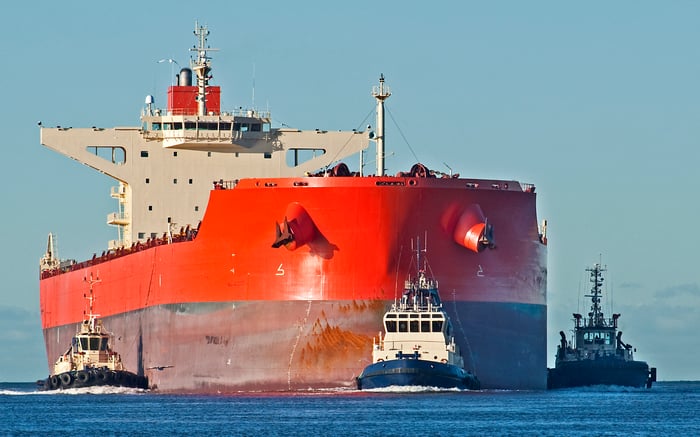 Star Bulk Carriers stock is leaving port -- but there still may be time for investors to load up. Image source: Getty Images.

Four days later, the BDI just beat that record with a stick.

On Tuesday, the Baltic Dry Index  surged an additional 124 points, an 11.3% gain on top of last week's 7.4% gain. At its new level of 1,217, the BDI has recovered most of the losses it suffered earlier in the month.

Where do we -- or, more precisely, where does the BDI, and where does Star Bulk stock -- go from here? That's hard to say, but a bit of perspective probably won't go amiss. While the BDI's surge today was certainly an impressive leap in a very short span of time, the fact remains that as recently as Nov. 8, the BDI was trading higher than it is today. What's more, the BDI is actually down 31% from where it sat in late July, near 1,800.

Similarly, Star Bulk stock cost more on Nov. 8 than it does today -- and it cost much, much more -- on the order of 30% more -- in July. These facts alone suggest that unless the BDI suddenly reverses course and resumes falling, there's still probably room for Star Bulk stock to run.