Shares of dry bulk shippers Star Bulk Carriers (SBLK -3.16%) and Safe Bulkers (SB -2.17%) tumbled more than 10% in early trading on Tuesday. They then gained back ground, and at the close today, Star Bulk stock was down 6.8% and Safe Bulkers was back to only a 5.9% loss. 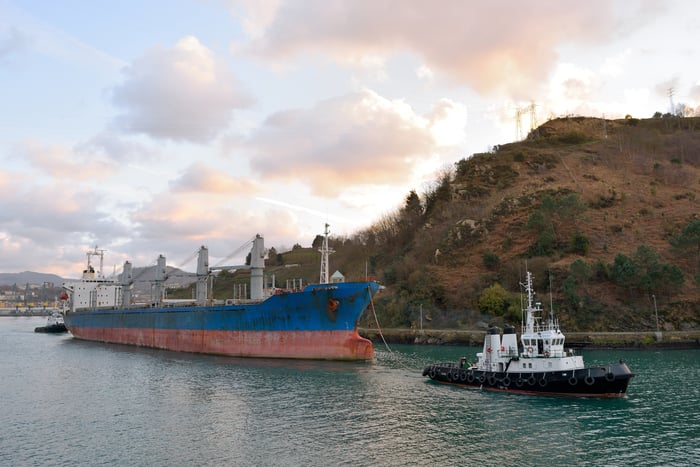 Since peaking above 5,600 in early October, the value of the Baltic Dry Index (which tracks shipping rates for vessels carrying cargo such as iron ore, coal, and grain) has tumbled nearly 25% in less than a month, including today's 2.6% loss. And the lower it goes, the less likely it is that Star Bulk and Safe Bulkers will keep raking in the profits that have helped to more than triple Star Bulk's share price over the past year and more than quintuple the shares of Safe Bulkers.

In short, investors today got spooked that the upward cycle in shipping rates has indeed come to an end.

That being said, not all the news is bad. And this could be why Star Bulk and Safe Bulkers' declines in share price first halted, then reversed today. Earlier this morning, a third dry bulk shipping company, Seanergy Marine, reported earnings that beat analyst expectations for both revenue and earnings.

Seanergy commented that the highest market levels of the last 12 years in the Capesize sector -- the largest class of dry bulk carriers -- saw daily chartering rates reach $87,000 a day at the start of the fourth quarter. And despite seeing those market levels decline over the past few weeks, Seanergy views this drop as a "short-term correction."