Ooma's getting a reward from Wall Street as well, with William Blair upgrading Ooma stock from market perform to outperform. Between the two developments, Ooma shares shot up more than 23%. (And it's still up about half that amount as we approach the midday mark.) 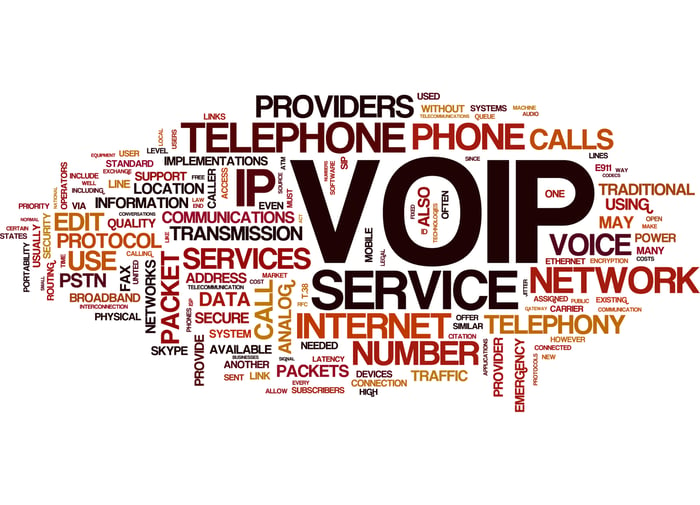 VOIP may be the future, but are there profits in VOIP provider Ooma's future? Image source: Getty Images.

Heading into Q3 2018, Wall Street analysts were looking for Ooma to report about $0.06 per share in pro forma losses for the quarter on sales of $31.7 million. In actual fact, Ooma reported sales of $32.6 million, and a loss only half as bad as Wall Street had feared -- just $0.03 per share.

Management expects that its revenue, too, will exceed estimates for both the current quarter and the year.

What William Blair said about that

Reviewing the news, analysts at William Blair were ebullient. Ooma is showing "consistent execution" and "solid" results, they said in a note covered today on TheFly.com. That fact alone might have been enough to prompt William Blair to upgrade, but the real kicker for this stock is its valuation, say the analysts: "With Ooma currently trading at a multiple less than half that of the peer group, we believe this is an attractive time to buy the stock."

Some thoughts on that valuation

But is it, really? Is Ooma really selling for such a huge discount to its "peer group," and does this make it a buy? The answer probably depends on what "multiple" we're talking about here, and which "peers."

If you take an expansive view of the telecom industry, Ooma arguably competes with everyone from marquee name telecom companies like AT&T and Verizon, to phone service-providing cable companies like Comcast -- all of which offer cellphone service as well as the landlines that Ooma's VoIP services aim to replace. Conversely, a more constrictive view of Ooma's business leads us to just one name-brand, publicly traded peer to which we can compare it: Vonage (VG).

And compared to Vonage, I almost see where William Blair is coming from. With a market capitalization of $2.5 billion and trailing annual sales of $1 billion, Vonage stock sells for about 2.5 times annual sales. Ooma meanwhile, at a market cap of about $266 million before today's upgrade, cost only 2.2 times sales. That's a significant discount to Vonage's market cap. It's not, however, "less than half."

Of course, the real problem here is that aside from revenue, there aren't a whole lot of other metrics on which to value Ooma (at least not positively) relative to a peer like Vonage. Neither Vonage nor Ooma, for example, is currently earning GAAP profits, so valuing them on P/E is entirely out of the question. And if you try to compare the stocks on free cash flow, well, Vonage generated a very respectable $125 million worth of such cash profits over the past year, giving it a 20-times-FCF "multiple." Ooma, on the other hand, burned through negative $3.2 million in free cash flow -- and indeed, according to S&P Global Market Intelligence data, Ooma is free-cash-flow negative in most years, which makes it hard to value the stock on that basis as well.

So what's the takeaway for investors here? Ooma beat earnings estimates yesterday -- on that there's no debate. However, Ooma did so without actually earning anything. Indeed, Ooma has lost money for as far back as S&P Global keeps data, and most analysts are forecasting that Ooma will keep on losing money for as far forward as analysts have published estimates (i.e., at least through 2020).

William Blair may believe that this makes Ooma stock a good choice relative to its peers. But objectively speaking, I can't say I find much to like in these numbers.