As of this writing, it's been a week since graphics processing unit (GPU) manufacturer NVIDIA (NASDAQ:NVDA) reported its fiscal third-quarter results. The numbers were good, but the outlook for the fourth quarter spooked investors. It took just days for the stock to go from superstar to run-of-the-mill technology provider -- at least as far as share valuations are concerned. Even the hotly anticipated release of Electronic Arts' World War II shooter Battlefield 5 -- complete with new ray tracing-capable graphics technology -- wasn't enough to save NVIDIA stock.

However, the stock's swoon is way overblown if investors weigh management's comments rationally. It was an unpleasant surprise, but the third quarter set up a huge opportunity for NVIDIA shareholders, old and new.

It wasn't the third quarter that was the problem. Revenue increased 21% to $3.18 billion, and earnings per share were up 48% to $1.97. Given the year's worth of excess in the U.S. stock market, though, Wall Street was looking for more. The cause for the "miss" was that gross profit margin on product sold unexpectedly declined by 2.9-percentage-points -- down to 60.4% from 63.3% in the second quarter. 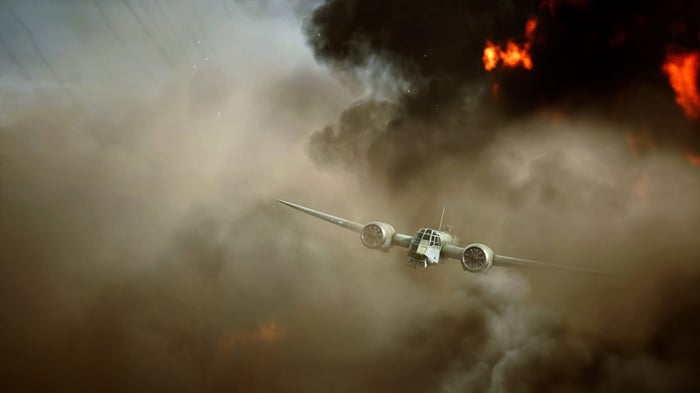 This screenshot from Battlefield 5 might as well symbolize NVIDIA and the current investing environment it has to navigate. Image source: Electronic Arts.

Things got worse when NVIDIA released fourth quarter guidance. Revenue is expected to be $2.7 billion, plus or minus 2%. At the midpoint, that's a 7% year-over-year decline, the first time that's happened to NVIDIA in years. The only saving grace is that gross profit margin is expected to rebound back to 62.3%, up from the 61.9% in the fourth quarter last year.

The cause for this step backward? A hangover from the collapse of the cryptocurrency mining bubble that started in late 2017. Inventory of the company's mid-range Pascal cards -- the GPUs getting replaced by the new artificial intelligence and ray-tracing Turing cards -- have remained higher than expected, and it's going to take some time for prices to reduce enough to coax gamers into a purchase and work off the excess inventory left over from the digital-currency bust.

Let's not take too much away from NVIDIA, though. Even with a modest decline expected in Q4, 2018 has been a massively successful year for the GPU maker, and it will remain so regardless.

As for the Wall Street freakout over guidance, CFO Colette Cress said on the earnings call that "Pascal is well positioned as the GPU of choice in the midrange for the holidays, and we expect to work down channel inventories over the next quarter or two." A quarter or two? Like six months? That's hardly enough headwind to get worked up about. Consider the momentum NVIDIA's technology has behind it -- trends that it expects to continue unabated during and after this "Pascal problem."

As if it knew how investors would react, NVIDIA's board of directors was ready with a new authorization to repurchase $7 billion more of its own shares. That's 8% of the company's entire current market cap of $88 billion, quite the conviction buy on management's part. With shares now trading hands at 19.4 times the last trailing 12 months' profits, there are worse places to spend money.

Is that a fair price to pay for the rest of us? I say yes, and I'll be buying more in the weeks ahead. The slowdown in the video gaming segment is a big deal since it has made up 56% of total revenue so far this year. However, NVIDIA just started releasing new chips based on its new Turing architecture that use AI and ray tracing, representing the company's biggest technological advance in quite some time. That tech isn't just a big deal for video game aficionados: it has applications for graphic artists (everything from architects to Hollywood's visual effects industry), data center operators, and auto manufacturers, too.

Growth in those segments remains intact, with the data center business especially worth keeping an eye on. The current fiscal year isn't over yet, and year-to-date sales have already exceeded last year's. With all three on the upswing, gross profit margins rising overall, and NVIDIA still repurchasing its own stock, this dramatic pullback looks as if it could be long-term gold for shareholders.