On a day stocks rallied after comments from the Fed chairman, Salesforce rose on strong growth and Dick's Sporting Goods reported higher profit.

Stocks soared Wednesday after comments from Federal Reserve Chairman Jerome Powell soothed investor concerns regarding aggressive interest rate hikes. Powell said in a speech that interest rates were "just below" a range that would be neutral, apparently contradicting his previous view expressed in early October. The Dow Jones Industrial Average (^DJI -0.90%) and the S&P 500 (^GSPC -0.46%) both had unusually large gains. 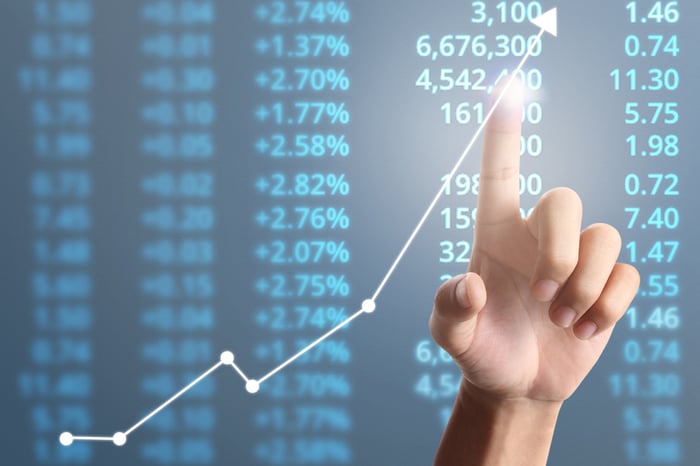 Salesforce blew away expectations for third-quarter results today, and shares soared 10.3%. Revenue grew 26% to $3.39 billion and non-GAAP earnings per share rose 45% to $0.61. Analysts were expecting revenue of $3.37 billion and EPS of $0.50, which was at the top of guidance from the company.

Service and support revenue from sales cloud grew 11% to $1 billion, service cloud revenue increased 24% to $0.9 billion, and marketing and commerce cloud sales soared 37% to $0.5 billion. Salesforce platform and other revenue, which includes a $105 million contribution from newly acquired MuleSoft, increased by 51% to $0.7 billion.

Fueling the stock's surge, which spread to other technology stocks as well, was a positive outlook. Besides a raise in guidance, CEO Marc Benioff gave an optimistic view of technology spending on the conference call, saying, "CEOs have been investing aggressively and the economy has literally been ripping."

Dick's Sporting Goods reported mixed third-quarter results, missing on sales expectations but beating on profit and raising guidance for the full year. The market reaction was mixed, too, with the share price down 3.9% at one point but closing up 2.6%. Sales decreased 4.5% to $1.86 billion, missing expectations for $1.88 billion, while earnings per share grew 11.4% to $0.39, thrashing the analyst consensus of $0.26.

Consolidated same-store sales fell 3.9%, which was a slight improvement over last quarter and within the range of the company's expectations, according to CEO Edward Stack. E-commerce sales increased 16% in the quarter, and gross margin improved 70 basis points to 28.2%.

Dick's is dealing with the fallout of its decision to stop selling certain semiautomatic firearms and halt gun sales to minors. The result has been a decline in revenue but a shift to higher-margin products. The company raised its full-year EPS outlook from $3.02-$3.20 to $3.15-$3.25.