Its growth momentum was as strong as ever through the kickoff of the holiday shopping season.

It's shaping up to be a banner holiday season for Wayfair (W -5.82%). The home furnishings specialist recently issued a sales update for the peak online shopping period centered around Black Friday that showed robust momentum for its e-commerce business. And while the press release didn't include much in the way of hard numbers, it did show that some key prongs of management's growth strategy are working about as well as investors could expect. 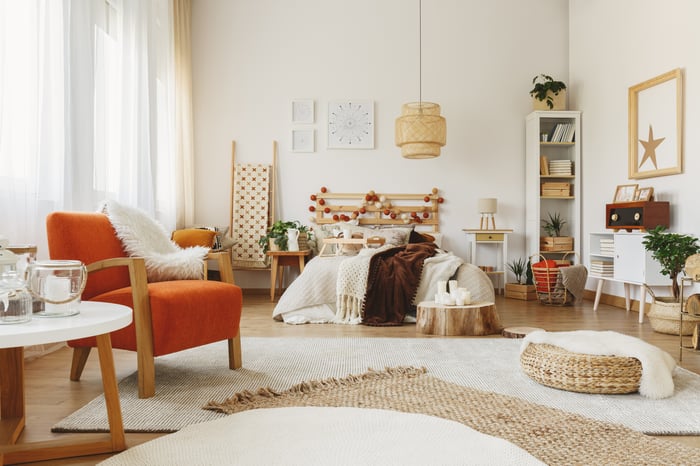 Wayfair reported a 58% sales spike for the five days that span Thanksgiving Day through Cyber Monday. That figure is impressive for a few reasons. First, it marks an acceleration from the 40% jump the company logged in the most recent quarter. As a result, Wayfair is in a good position to exceed management's growth guidance for the fourth straight quarter.

That 58% spike also improves on the 53% increase that the company reported for the same period in 2017. It's always good news when your growth rate is accelerating, as it implies healthy market share gains and lots of room for further improvement.

Finally, Wayfair noted that its fastest growth occurred on Black Friday, which adds weight to management's contention that home furnishing sales will keep shifting online from physical retailing. "We see the overall cadence of holiday shopping changing with online becoming the clear leader throughout the holiday weekend, driving outsized growth," CEO Niraj Shah explained. "We anticipated the continued shift of dollars online and were well positioned to capture that growth on Black Friday and throughout the weekend."

A key element of Wayfair's growth thesis involves the company expanding its sales base beyond the core furnishing niches it already dominates. There was encouraging news on this score, too. The company sold plenty of sofas and rugs over Cyber Monday, according to the release, but its faucets and vanities also sold briskly. That's a category Wayfair only recently entered and it has only been able to compete there by raising its delivery and installation game.

If the retailer can thrill customers with its fulfillment of purchases of things like vanities and bulky objects like sofas and even hot tubs, then its selling platform likely has lots of flexibility to push into related furnishings niches over the years.

Of course, Wayfair's holiday update didn't include any information about how aggressive the company was with pricing, or whether it needed to jack up marketing spending to achieve its head-turning growth. For those figures, investors will need to wait for its official fourth-quarter report in early 2019. There wasn't any update on other spending trends either, like head count and shipping infrastructure, which have been soaring lately.

In other words, this update shouldn't lead investors to believe Wayfair is any closer to reaching bottom-line profitability. Instead, it will probably close 2018 out with its fifth consecutive year of annual losses.

Still, Wayfair is winning market share in a quickly growing industry niche. It's also finding plenty of ancillary product niches to expand into, aided by the proprietary delivery network it has built to move large, bulky, and often fragile items to its customers' homes. Those wins suggest the management team is right to double down on its growth strategies right now so that the company can consolidate its hold on the market before allowing profitability to improve in 2019 and beyond.