Please ensure Javascript is enabled for purposes of website accessibility
Log In Help Join The Motley Fool
Free Article Join Over 1 Million Premium Members And Get More In-Depth Stock Guidance and Research
By Brian Stoffel – Nov 2, 2018 at 9:56AM

The company is pleasing customers.

Wayfair (W -5.40%) has an ambitious goal: Do for home furnishings what Amazon.com has done for everything else in retail, i.e, become the go-to e-commerce player. Doing that isn't easy. It requires mammoth up-front investments in fulfillment centers and every effort to make customer loyalty stick.

The company came out with earnings Thursday morning. They showed that while Wayfair is hitting the right notes when it comes to sales, profitability is still a faraway dream. 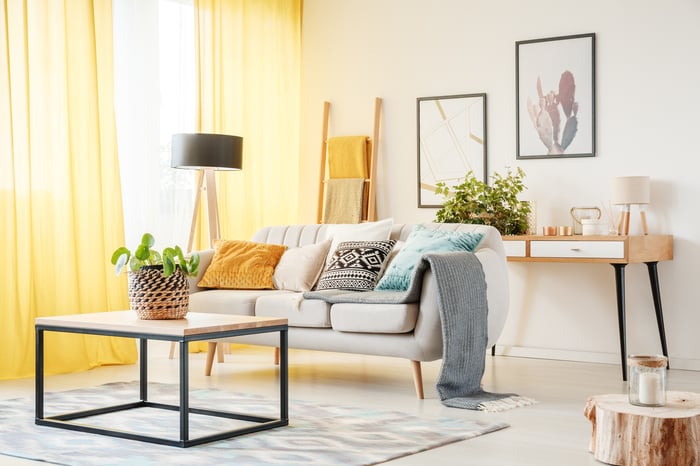 Before we get into the details of the quarter, let's review the headline numbers.

Data source: Wayfair. *EPS is presented on an adjusted basis.

There's a lot to unpack here. How, for instance, can revenue grow by so much, yet the company's losses on paper (earnings) and in the bank (free cash flow) are so great?

It's really a combination of forces centered around Wayfair's attempts to build out its infrastructure both at home and abroad. The company hasn't been secretive about this, telegraphing its focus internationally for a number of quarters.

Because it's just getting a foothold in Europe, gross margins tend to be lower for Wayfair across the pond as it tries to entice new customers. That helped push overall gross margins down 35 basis points to 23.07% for the quarter.

The picture wasn't rosy when it came to operating expenses either. Even after backing out stock-based compensation, Wayfair's spending jumped almost 50%, canceling out all the gains from the 40% jump in sales.

On the other hand, while the massive losses in free cash flow appear alarming, there's more to the picture. Over the first nine months of 2018, overall free cash flow losses are almost exactly the same as they were a year ago -- sitting at a loss of roughly $114 million.

If we back up and look at the company from 30,000 feet, these moves make sense. Wayfair believes it has the opportunity to capture huge swaths of the next generation of e-commerce furniture shoppers. The two big questions are:

The first question is one that will be answered in the coming years. That's because the focus now is on the second point: locking customers in. Wayfair offers several metrics that point toward positive momentum here.

The fact that orders by repeat customers are so high is very important. It shows that customers are, in fact, sticking around even as competition enters the scene. As it is, two-thirds of all orders for the quarter came from such shoppers.

There's little doubt that the company's build-out of its CastleGate fulfillment centers -- which have expanded to include locations in Canada and Europe this year -- plays a huge role in customer satisfaction. Not only does this help shorten the time it takes to deliver goods, it also helps Wayfair deliver for a lower internal cost than the competition. And it can pass those savings along to the customer.

CEO and co-founder Niraj Shah is confident these are the right moves: "We are taking a long-term approach to building our business and putting shoppers first by investing further in our logistics capabilities, in our international regions and in scaling headcount to enhance our customer offering in under-penetrated product categories and services," Shah was quoted as saying in a press release.

Here are a few more important nuggets from the company's earnings release:

Putting customers first usually means spending lots of money to win them over for the long haul. That's why it's important to keep an eye on the company's balance sheet -- which currently includes $525 million in cash versus $347 million in long-term debt.