A big third quarter could spell an even bigger holiday quarter.

It's been a terrific year for lululemon athletica (LULU 0.41%), and investors should expect another strong performance when the company reports its third-quarter earnings on Wednesday, Dec. 5, after market close.

Here are the key numbers to keep your eye on. 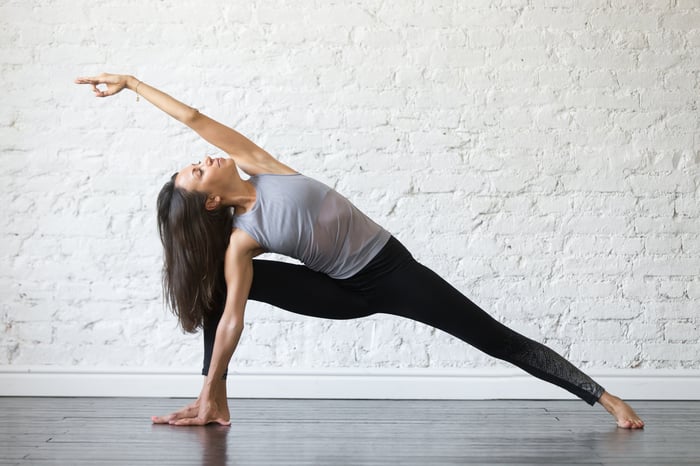 It's all about the top line

Lululemon is coming off an impressive quarter that featured high growth rates on both the top and bottom lines. Second-quarter revenue growth of 25% was driven by strong comparable sales growth of 19%, which includes both store and online traffic. Higher margins led to earnings growth of 82% over the year-ago quarter.

These results were driven by equal strength across women's, men's, and accessories. During the second-quarter conference call, COO Stuart Haselden expressed optimism about the fall assortment for the third quarter. "Despite the heat in August, we're already getting great initial reads on our early jacket and outerwear offerings," Haselden said.

In the second quarter, the company cited strength in core products such as the Align and ABC pant styles, as well as positive guest response to the new Office Travel Commute styles. Toward the end of the third quarter in October, Lululemon launched a new limited-edition collection in collaboration with the Royal Ballet's Francesca Hayward that seems to have performed very well given that several of the items are sold out.

Also, investors should keep an eye on the company's international business, which is 12% of its total revenue but is growing much faster than other regions. Asia comps grew 50% last quarter, which is consistent with the trend for that region over the last year. In China, comp sales increased more than 200%. This was driven by the launch of Lululemon's WeChat store in partnership with Chinese social media giant Tencent Holdings. Management plans to launch other e-commerce sites in Korea and Japan by the end of the year.

Margins are taking a stretch

Lululemon has experienced expanding margins over the last year, as higher store traffic has allowed the company to avoid markdowns and keep inventory turnover up. The company has also made strides in lowering product costs. Last quarter, gross margin expanded 320 basis points to 54.8%, and guidance calls for further expansion in the short term.

Management expects continued improvements in product margin and greater operating efficiencies to increase gross margin by 1 to 1.5 percentage points for the full year.

As for operating margin, strong growth in e-commerce sales -- which generate nearly twice the operating margin as company-owned stores -- should continue to boost operating profit and earnings per share in the short term. These gains in margins are being made even as management continues to invest in technology, product design, distribution, and the supply chain.

Online sales growth will be important

Management certainly thinks so. During the last call, Haselden said there's still room for improvement in the company's online business:

Our guests are responding well to the improved experience, and we still see opportunities to remove friction and increase efficiency on the site as we continue to improve the search and checkout functions as well as expand further into personalization.

Also, the company has made changes in how it collects customer information at point-of-sale, such as email addresses. This has made it easier for the company to bring back customers for repeat purchases. Last quarter, Lululemon's email file was up 80% year over year, which could pay off in a big way during the holiday shopping season.

At the same time, Lululemon has made greater investments in data analytics and digital marketing. All of these improvements help explain the booming online sales the company has been experiencing this year.

Keep in mind, though, that because of the strong trends in e-commerce and other areas discussed above, Wall Street analysts have even higher expectations. The consensus analyst estimate expects earnings per share to be a few cents higher than management's guidance, or $0.69. Wall Street expects Lululemon to report revenue of $735 million, representing growth of 18.9% over the year-ago quarter.

All in all, it should be another strong quarter for Lululemon, which has enjoyed incredibly strong momentum so far this year. A robust third quarter would tee up the company nicely for a big holiday quarter.