This trio of stocks should help steady your portfolio in today's rocky market environment.

Dividend stocks are appealing in any environment, but with the recent gyrations in the stock market and concerns about rising interest rates, now is a particularly good time for investors to consider dividend stocks, especially as investors seem to be fleeing high-growth tech stocks that have outperformed in recent years.

Historically, dividend stocks have beaten non-dividend payers, and dividend stocks also tend to have defensive attributes that make them smart investments in down markets. On that note, keep reading to see why our contributors recommend picking up shares of Gilead Sciences (GILD 3.82%), Hanesbrands (HBI 4.30%), and Target (TGT -2.35%). 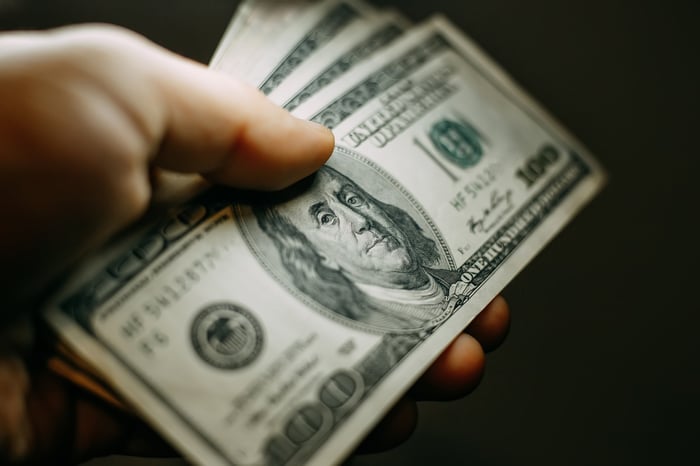 George Budwell (Gilead Sciences): While Gilead Sciences may no longer be a "must own" growth stock due to its rapidly declining hepatitis C drug sales, this top biotech name is arguably worth owning as a stable source of passive income. As things stand now, Gilead's stock offers an above-average yield of 3.23%, which is backed up by the company's absolutely stellar free cash flows. In the third quarter alone, for instance, Gilead's core businesses generated a whopping $2.2 billion in operating cash flow during the three-month period.

Equally as impressive, Gilead's average payout ratio of 41% over the past three quarters is among the lowest within the large-cap biopharmaceutical space. This blue-chip biotech thus has ample room to grow its top-notch yield, making it one of the more enticing income plays in all of biotech right now.

The one potential catch, though, is the strong possibility that Gilead may modify its capital allocation strategy in a significant way within the next 12 months. The biotech, after all, is set to hire a new CEO soon, and its all-important HIV drug sales simply haven't been growing fast enough to offset the sizable declines in hepatitis C treatment -- despite the launch of its next-generation HIV medicine Biktarvy. In short, Gilead might be gearing up for an acquisition spree, which could eventually trigger a change in its dividend policy.

That said, Gilead does have an eye-popping $30.8 billion in cash and cash equivalents in the bank right now. That amount should comfortably fund multiple mid-sized acquisitions. But if Gilead chooses to go big-game hunting -- and there are some good reasons to think it will -- there's a real chance that Gilead will have to rethink its dividend program at some point.

All told, Gilead sports one of the healthier and more generous dividends within its peer group. But income investors will definitely want to stay on top of the company's business development plans, especially as its new management team takes shape.

Keith Noonan (Hanesbrands): Clothing stalwart Hanesbrands has seen its stock lose roughly a quarter of its value in 2018, owing to some lackluster earnings results and the unexpected end to a significant retail partnership. Shares plummeted in August after the company came up short on second-quarter profits and management announced that Target had chosen not to extend its contract for an exclusive line of Hanesbrands' Champion clothing beyond 2020. More recently, the stock sold off after its third-quarter results delivered weaker-than-expected sales due to soft demand for the company's underwear and socks.

Shares are now valued at roughly nine times this year's expected earnings, trade at five-year lows, and come with an elevated dividend yield of roughly 3.9% -- an appealing combination for long-term investors looking for solid dividend stocks. The last several years have certainly been challenging for Hanesbrands, but the company still has a collection of valuable, consumer-staple brands that are unlikely to face significant disruption or downturn in demand in the event of a recession.

While it's not a name that commands premium pricing power in line with the likes of Nike or Adidas, Hanesbrands' Champion brand has been posting impressive growth -- with sales up 30% globally on a currency-adjusted basis compared to the prior-year period. Brands including its namesake Hanes, Playtex, Wonderbra, and DKNY form a solid product portfolio across the clothing and apparel space, and the company is making efforts to energize sales and margins through acquisitions, increased focus on direct-to-consumer channels, and expansion in international markets. Hanesbrands looks to be making some meaningful progress on those fronts, and along with its solid dividend yield, there's a lot to like about the stock at current prices.

Jeremy Bowman (Target): In the e-commerce era, big-box retail stocks may be anathema to many investors. But while some traditional retailers like Sears and Toys R Us have folded, others are thriving, and Target is increasingly looking like one of the winners. The broad-line retailer occupies a unique space in the sector with its "cheap chic" image and focus on segments like baby and kids that appeal to millennial parents.

Target's recent numbers show that its momentum is strong and building, as comparable sales were up 5.1% in the third quarter and digital sales jumped 49%. However, Target's margins compressed as a result of its investments in e-commerce and store renovations, which prompted a sell-off in the stock, but that's the right strategy for the company in an increasingly competitive retail environment. In fact, the company looks primed for a record holiday season, as it's spruced up its toy department and is offering free two-day shipping without a membership fee or an order minimum, in addition to other convenient pickup and delivery options.

Considering that sales growth momentum, Target shares look cheap at a P/E of just 13.5, and its payout ratio just shy of 50% indicates the company has more room for dividend growth. If you're looking for the rare stock that can deliver both growth and a solid dividend income, Target looks like a good choice.

2 Top Dividend Stocks to Buy Hand Over Fist Before 2023