One of these longtime business partners is easily a better investment than the other.

These two companies have more than their names in common. Universal Display (OLED 5.26%) develops the technologies that make organic light-emitting diode (OLED) screens work, licenses out its patented solutions to screen manufacturers, and resells some of the necessary materials as well. LG Display (LPL 2.59%) is one of those manufacturers and has been a business partner of Universal Display for many years.

But which one is the better investment today? Let's find out. 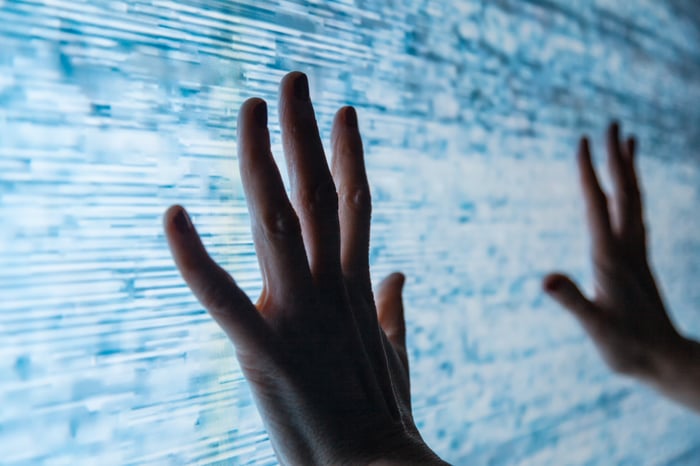 The similarities don't end there. Both stocks have lost more than 40% of their value in 2018. LG Display's earnings have surged 50% higher in the last five years, on average. For Universal Display, the compound annual five-year earnings growth rate stopped a little bit higher at 64%.

That's where things start to diverge.

LG Display makes more than OLED displays. It is also a major supplier of old-school LCD screens, which is the technology that OLED products are replacing these days. So LG Display is cannibalizing its LCD operations with every OLED-based win, which hurts the top line. However, those OLED screens are simply better in many ways and can command a higher street price, so the good times keep rolling on the bottom line. Therefore, the company doesn't mind losing some sales as long as the profits are flowing in and LG Display is expanding its OLED manufacturing facilities while reducing its LCD presence.

Universal Display, on the other hand, keeps an exclusive focus on OLED research. There is no cannibalization involved in this company's growth, just healthy expansion with every new or improved licensing and/or materials contract. All told, this company has grown its earnings by an annual average of 32% over the past five years while LG Display's revenue fell by an average of 1%.

LG Display is not the only name in the screen-building space. Fellow Korean tech giant Samsung (NASDAQOTH: SSNLF) is larger and in many ways better equipped, and smaller names such as Japan Display and Sharp are also jockeying for market share. This open market with several large suppliers puts downward pressure on product prices and, ultimately, makes it difficult to recommend LG Display. At the moment, LG Display's gross margins have been pushed all the way down to 11.3% and the company is roughly breakeven on the bottom line.

That's not the case for Universal Display, which is nearly alone in researching phosphorous OLED display tech. This company sports a kingly gross margin of 79% and retains 15% of its revenue in the form of earnings. Yes, the stock is a bit pricey at 51 times trailing earnings and 46 times free cash flows, but Universal Display has the near-monopolistic market position and raucous growth rates to walk that talk.

And the valuation pain is more bearable than usual right now due to soft smartphone sales in 2018. The upcoming upgrade cycle for 5G-equipped phones should alleviate that pressure point, and big-screen OLED television sets are making their mark on the market as well. I see plenty of runway for renewed growth up ahead of Universal Display, but LG Display's prospects are limited by heavy competition and expensive hardware tooling.