Please ensure Javascript is enabled for purposes of website accessibility
Log In Help Join The Motley Fool
Free Article Join Over 1 Million Premium Members And Get More In-Depth Stock Guidance and Research
By Rich Duprey – Dec 1, 2018 at 7:32AM

Like much of Macau, its future hinges on VIP gamblers.

Studio City International (MSC 1.70%) picked a bad time to go public. The Macau-based operator of the non-gaming portions of the integrated Studio City resort in Cotai debuted on the New York Stock Exchange in October, just before Wynn Resorts (WYNN 0.30%) reported earnings that pointed to a slowing gaming market in China. Studio City shares, which had more than doubled from their $12.50 offering price, crashed in response, though they still sit some 30% above the IPO price.

The company may be a risky bet, as it's tied to a casino market that is facing numerous threats from rival regions and its own government. And though it is by far the world's top gambling destination, the impetus for a rebound in Macau may not be so quick to arrive. 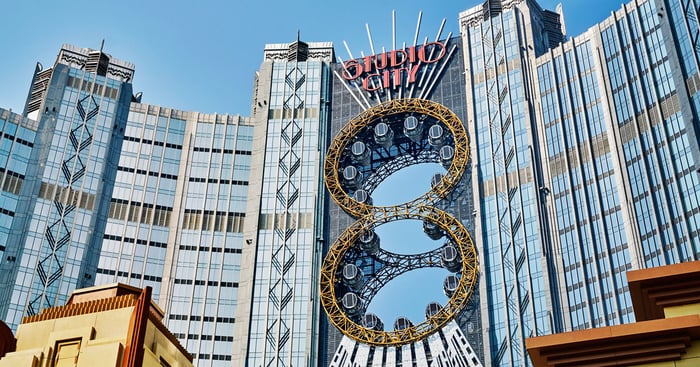 VIP gamblers have a change of heart

Studio City International stock is a play on China's mass-market gaming segment. When majority owner Melco Resorts & Entertainment (MLCO 2.66%) first opened the Studio City complex in 2015, it made a conscious decision not to install VIP gaming tables in the casino. Macau had been sent into a tailspin when Beijing cracked down on corruption, and when Cotai was being developed, it issued an edict that casinos begin generating a greater share of their money from non-gaming activities.

VIP baccarat was and remains the bellwether of the high-roller market, and skipping the elite gaming tables was a risky bet. But because gaming authorities tightly regulated the number of tables each new resort could have, by not installing any, Melco was saying Studio City was an all-in bet on the mass-market opportunity. It was also one it quickly came to regret.

After a two-year slide in gambling revenues, Macau came roaring back on the coattails of the new Wynn Palace resort, a luxury hotel and casino in Cotai that -- instead of theme-park-like attractions like Studio City's giant figure-eight Ferris wheel and Batman-themed 4-D flight simulator -- offers high-end retail stores and a gondola ride that provides bird's eye view of the city. VIP gamblers flocked to the resort, and still do today -- it continues to cannibalize the business of the older Wynn Macau.

Las Vegas Sands (LVS -0.03%) opened its Parisian resort a month after Wynn Palace, and suddenly Macau was back. Even VIP gamblers thronged to the new resorts, but Studio City's performance lagged its rivals. Management decided to reverse course and install VIP gaming tables to boost revenues.

The change worked and revenues have risen, though the rate of growth has slowed. The resort's also not profitable, though losses have narrowed considerably. Yet it's possible it may not have VIP tables after next year.

Melco Resorts holds all the cards

Melco Resorts retained a 60% controlling stake in Studio City International after the spinoff, and the VIP tables Studio City installed were actually originally granted to Melco for use at its other properties. Melco could, at any time after Oct. 1, 2019, unilaterally pull the tables from Studio City. Certain conditions apply -- the government might mandate that it do so, or it could remove them if Studio City fails to pay its debts -- but Melco Resorts also could take those tables back after giving Studio City 12-months notice, or if its loses its majority voting interest in the company.

The VIP market has carried Macau and Studio City to recovery, and Melco Resorts & Entertainment may decide its own properties' performance is paramount, particularly if it decides to sell off tranches of Studio City stock.

The saving grace for Studio City is that it was built with a mass market in mind, so a reduction in its VIP business may not hurt it as much. Japan will soon have an operating casino industry that many expect will rival Macau -- that may lure away some of Macau's VIP gamblers, which would hurt properties dependent on high rollers.

Yet it's also plausible to argue that as goes the VIP market, so goes the mass market. If the high rollers reduce their visits to Macau, there may not be enough tourists looking for a theme-park atmosphere to make up the difference.

Because there are relatively very few shares of Studio City International available for ownership by small investors, you might want to be cautious about buying into this operator of non-gaming activities. Macau is entering a period of flux, and because Studio City International is not the master of its own future -- and may lose a rich source of revenue -- it's a risky stock to own.