A recent survey by the National Retail Federation found that 29% of Americans (36% of men and 23% of women) wanted to receive consumer electronics as holiday gifts. Meanwhile, another recent survey of over 2,000 shoppers from buyback site Decluttr revealed that three types of tech gifts topped this wish list category -- headphones, smartphones, and virtual assistants. 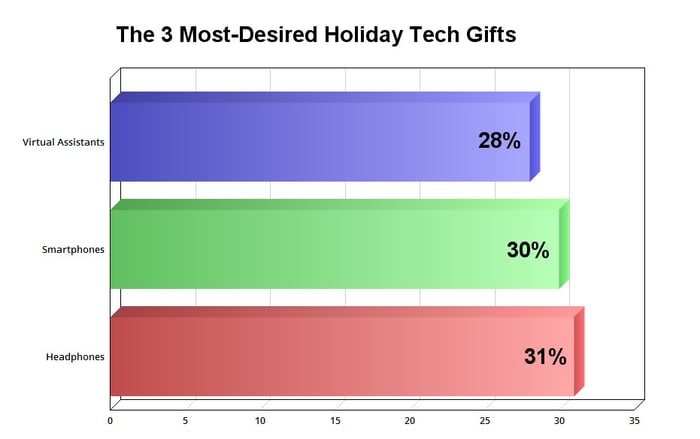 That's great news for companies like Turtle Beach (NASDAQ:HEAR), which saw sales of its gaming headsets soar this year on the popularity of "battle royale" video games like Fortnite. It's also good news for Apple (NASDAQ:AAPL), which controls over half of the U.S. smartphone market, according to StatCounter.

Meanwhile, the battle on the smart-speaker front should heat up between Amazon's (NASDAQ:AMZN) Echo devices and Alphabet's (NASDAQ:GOOG) (NASDAQ:GOOGL) Google Home devices. Amazon still controls over 70% of that market in the U.S., according to a research report by CIRP, but Google is gaining ground quickly with a 24% share.

Younger and more frugal shoppers will also likely buy refurbished consumer electronics. Decluttr's survey found that 2 out of 5 Americans were open to buying refurbished tech -- with 59% of millennial parents likely to make such a purchase, compared with 27% of non-millennial parents.