Please ensure Javascript is enabled for purposes of website accessibility
Log In Help Join The Motley Fool
Free Article Join Over 1 Million Premium Members And Get More In-Depth Stock Guidance and Research
By John Ballard - Jun 18, 2021 at 10:00AM

The leader in console headsets for video game players is making a big comeback.

Turtle Beach (HEAR -4.95%) doesn't get the same level of attention as its larger peers in the gaming peripherals market like Logitech International (LOGI -2.73%) and Corsair Gaming (CRSR -4.69%). But the company's profile rose in 2018 when Epic Games' Fortnite was all the rage, fueling a spike in demand for video gaming accessories. That year, the headset maker's revenue nearly doubled to $287 million. However, that growth spurt was short lived, and sales fell in 2019.

Now, though, Turtle Beach is on the upswing again. The combination of the pandemic's stay-at-home environment and the launch of Sony and Microsoft's new video game consoles sent its revenue to a new record last year. In 2021, the stock is up 67% year to date, and with the investments management has made to expand its product line over the last few years, Turtle Beach is better positioned for sustainable long-term growth. 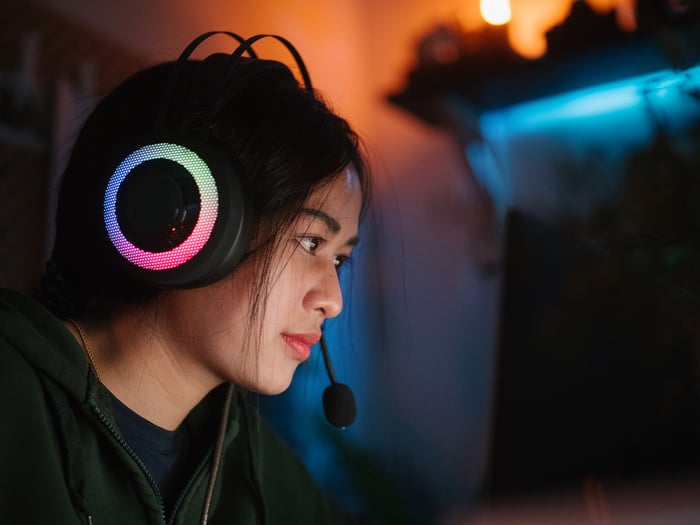 Owning a headset with a microphone is essential for gamers these days. The most-played titles are generally online multiplayer games, where communicating with teammates is not only crucial if you want to win, but also a vital part of the overall experience. Video games are becoming more social every year -- which helps explain why so many new players turned to gaming during the pandemic. It's also why there is such a large growth opportunity for a small-cap company like Turtle Beach.

During its 2020 second-quarter earnings call, CEO Juergen Stark shared some data about the growth in the gaming market. He pointed to a then-recent study by NPD Group that showed that 244 million people in the U.S. play video games, up 13% from 2018. Additionally, a study from Comscore showed that the number of U.S. households with a game console was up 31% year over year in May 2020. These results were consistent with Newzoo's research that forecasts the worldwide number of people who play video games will grow at an annualized rate of 5.6% per year through 2023.

An investment in Turtle Beach is not about catching the current wave of momentum around players buying accessories for their new consoles. Management is following a clear strategy to maintain its lead in console headsets while expanding into new products and categories that will significantly grow its addressable market.

Turtle Beach made two key acquisitions in recent years that have set up the company for long-term growth.

In 2019, it bought Roccat, a maker of premium gaming peripherals including PC gaming headsets, keyboards, and mice. In the most recent quarter, the market for PC gaming accessories grew by 90% in the U.S., but Turtle Beach's growth rate in that $3.5 billion niche was twice as fast as it gained market share.

Earlier this year, Turtle Beach entered the streaming accessories market with its purchase of Neat Microphones. The microphone niche is a small but fast-growing market worth $2.3 billion globally. Today, there are an estimated 40 million active gaming channels on Alphabet's YouTube, not to mention the number of people who engage with Amazon's Twitch and other streaming services.

The future is wide open

Even though Turtle Beach is smaller than Logitech or Corsair, its gross profit margin at 37% is on par with the industry leaders, so it's not being elbowed out of the market on price. Customers value Turtle Beach's products as highly as they value any other brand.

What's more, it currently sports a higher return on capital (an alternate calculation of return on equity) than its peers, earning 69% on capital employed over the last year. 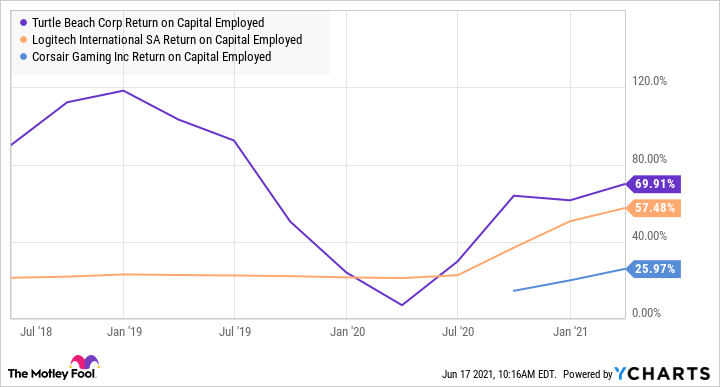 The stock is currently sitting close to its peak, but at a forward price-to-earnings ratio of 24, there's still room for it to head higher in the near term. Management is calling for another record year in revenue, driven by the high demand for PlayStation 5 and Xbox Series X, which should spur new accessory purchases.

Longer term, management is targeting compound annual growth in revenue of 10% to 20%. If Turtle Beach executes well, its stock price could double in value over the next five years based on that rate of growth.